Our first "child" on the go leaves us...

What is it folks say? A dog is a stepping stone to children.

Back in June of 1999 after months of research, including taking numerous dog breed selector surveys that is supposed to base upon your lifestyle help match you with a breed for which you are suited for them and them for you. Alaskan Malamute was to be our first child and after researching and meeting an incredible breeder couple in our area we were 100% sure. This couple did not breed because they needed the money for selling the pups it was truly

because they wanted one of the pups or a couple in fact for themselves. And we were lucky they had some pups on the way. June 12, 1999 the next litter of Canusa's Alaskan Malamutes were born. We visited the pups at 6 weeks and selected our little boy, which we would bring home two weeks later. During the 2 weeks until he came home though we scoured maps of Alaska, Canada, and ski areas trying to find the perfect name for this hard-working snow breed. Finally when we picked him up..."Summit" after one of our favorite ski chairs, Summit Six at Alpine Meadows is what stuck. It seemed very fitting as this chair boasts one of the best views in the world at a resort well known for their love of their incredible ski patrol rescue dogs.
Summit grew quickly and we quickly found out just what it meant that a dog is the stepping stone to a child. We wanted to continue our active lifestyle, but knew we had seen plenty of "No Dog" or "Leashed Dog Only" signs during our travels as a couple. So we went to books and internet to help us go with our first "child." And here's some of the most useful resources:
> http://www.petfriendlytravel.com/
> http://www.dogfriendly.com/
> http://www.hikewithyourdog.com/
> http://www.bringfido.com/
> http://www.petswelcome.com/ 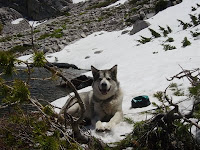 Through well-researched trips Summit enjoyed travels all over the Northern California coast, Yosemite, Lake Tahoe including Kirkwood Ski Resort for snow play, hanging in the back lot or LotA at Sierra at Tahoe, snow camping off Hwy89 south of Meyers, skijoring at Royal Gorge, sunsets on Incline Village's beaches during the winter (dogs not allowed during the summer), and chasing balls, sticks, kayakers, rafters on the South Fork of the American River
Planning trips for us and Summit was a definitely a step in preparing us for children. Destinations were well planned out as were supplies. So if you are at the stepping stone...know you can still GO with that first "child." Summit enjoyed nearly 10 years of going with us before leaving us quite unexpectedly Feb 12, 2009. He was our children's big brother and most definitely our first Child on the Go with whom we enjoyed many adventures and whose footsteps will be missed on the trails of our travels to come.