Another 24rs GO'ing in San Francisco 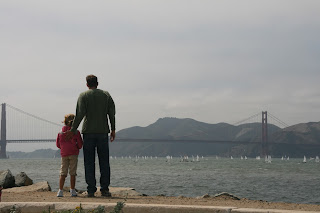 We love San Francisco and we love our friends there, but we don’t care for the traffic getting there on a Friday afternoon, so we tend to pay our visits on Saturday and get back out on Sunday before the traffic gets bad again with people coming in or going out from weekend adventures.  So one of the last weekends of the summer we decided to escape the triple digit heat of the Sacramento-area and partake in one of Mark Twain's wrongly attributed quotes…"The coldest winter I ever saw was the summer I spent in San Francisco."

And when we arrived it was quite breezy, but comfortable enough for us with jackets to make a stop we have long wanted to make...The Wave Organ. The wave organ is a wave-activated acoustic sculpture made out of 25 PVC pipes that that go out to various elevations in the bay at the end of a jetty at the Boat Harbor in the Marina District.  An extension of the nearby Exploratorium it was completed in 1986.  Shocking…you can actually find free parking if you just continue past the intimidating yacht club only parking signs.  It doesn't look like anything much but put your ears to the pipes and its amazing the sounds that nature’s waves provide.  And while you are at it you have incredible views of the bay, the Golden Gate, and Alcatraz. 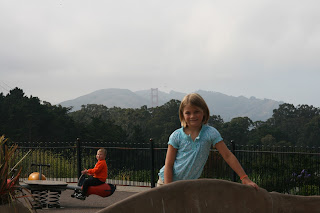 After we spent a good hour there we decided to take a drive through Presidio.  Over the last several years this old military installation has had an amazing revival now converted into homes, businesses, and even home to a Walt Disney Family Museum.  But after the long drive earlier in the day we decided the kids still needed to burn off some energy.  So we visited the Julius Kahn Playground located at West Pacific Avenue and Spruce Street.  Parkscan.org has lots of photos. And their description fits it quite well…"Locally known as "JK," Julius Kahn is adjacent to the Presidio, the nation's largest urban National Park.  The playground is in excellent condition and provides kids and parents two structures to choose from--one designed for babies and toddlers, and another for school-aged kids. Both playgrounds are situated in a sand pit!  JK also has basketball and tennis courts, and soccer and baseball fields that makes this park appealing to people of all ages.  This park is very green and is surrounded by a grove of beautiful trees that make this spot a great place to hike and explore.  The clubhouse has water fountains and restrooms available to the public.”  But the one thing not included in this description is the view…The Golden Gate rises beyond a beautiful field and grove of trees.  Our kids could have played for hours…and really they did on the wide range of play structures.

The next day we met friends for breakfast in the Hayes Valley area.  After lots of research for a place that could accommodate 6 adults and 4 kids we settled on Straw, a carnival themed eatery…including a Tilt-o-World booth.  They do take reservations for 6 or more and on a Sunday morning in the city this is highly advised.  We by-passed the large crowd of walk-ins and were seated.  From the theme-inspired décor to the brunch dishes like “Play with your Food” where you are invited to play Jinga with cinnamon toast sticks there was no going wrong with the kids and their mimosas and bloody mary’s met with the adults approval.

After the amazing breakfast, but prior to the drive home we decided to burn off some calories and energy, so we ventured up the street to one of many parks that have been revitalized in the city…The Hayes Valley Playground.  Newly reopened in June it has the soft play surface and really neat abstract play structures as well as a small community garden.  And supporting that garden is more “green” in a water catchment system and a living roof on the clubhouse.  Nestled right among the beautiful homes of the area at Buchanan and Linden Street it was a delightful place to spend the morning before hitting the open road home.  Again more info found on Parkscan.org  At about 1PM it was time to beat the traffic and hit the road.

But no worries we always GO to the city a couple of times and will return soon for another 24hour adventure.