Going Again in a Pandemic

It's hard to believe it has been almost 18months since we traveled internationally.  Our last trip was November 2019 to New Zealand.  Little did we know very shortly COVID19 would bring travel and the world to a halt.

In March and April of 2020 when the world locked down we chatted with Andy's Dad, the kids' beloved Papa, who we had no idea at the time was battling terminal cancer about taking another family trip.  We were weighing Hawaii where he had never been or the British Virgin Islands, a beloved destination from his younger years.  Andy had grown up jealous of his parents who would take off for Tortola and leave he and his brother in Indiana for a friend's sailboat watched over by a local, named Bubba, who also had a bar on Jost Van Dyke.  We were researching houses and plans for both.  As COVID infections and deaths climbed we were leaning towards Tortola where the protocols were extremely strict, but it would keep us and a possible fragile PJ as well as the islands' people safe. 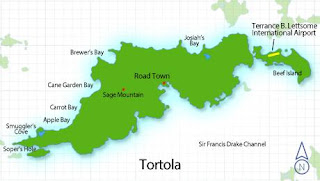 Fast forward to September when Paul would pass from this earth and it pretty much sealed the deal...we would go to Tortola in memory of him and for us to rejuvenate after a rough 6 months flying back and forth to the Midwest to care for him and what we didn't see ...a rough 6 months ahead including a serious concussion for Ally, 3 out of 4 of us contracting COVID in early February after months of extreme caution, and still recovering from its effects weeks later.

With only 154 cases since January 2020 and only 1 death their protocols were strict, but effective.  Our host of our rental home would help guide us through the process which would involve the following steps even before our arrival:

Just like another favorite Caribbean destination, Jamaica, we quickly realized everything operates on island time which means there are no set times for anything and pace is leisurely.  Everything uploaded 2 days before we let panic set in when the day before we were to leave their entry app went down and the Department of Health and Tourism Board could not access our info and approve.
Panicky WhatsApp messages (the only way to communicate via phone and text effectively in the islands) flew back and forth between us, our host, and the "app" people.
We loaded the car and headed to SFO (San Francisco) on a Friday night.  Still no travel clearance.  Our host said we would be OK, until we reached our final leg, Puerto Rico to Tortola, so we breathed a little easier.  When we stopped to gas up our one way rental to SFO (much cheaper than 2 weeks of parking) we see our travel clearance had arrived in our email inbox.
Thankfully so...because when we arrived in SFO they required we show it before we even were allowed to board our first leg, SFO to Miami.  Close call, but we were on our way....
Posted by A. Jolly at 12:06 PM

So excited to read and see pics of your travels. Enjoy!! And love to all

So excited to read and see pics of your travels. Enjoy!! And love to all