First my sincere apologies to my readers for my absence. We embarked on our Beaches trip to return to the holidays and then head first into ski season. But with the swimsuit tan being exchanged for a google tan and the last of the holiday decor packed away I will return on my weekly basis.

Beaches Turks and Caicos...we agreed on our last day will be a major do-over in a couple of years. We, the grandparents, a brother and his wife without kids, and another family who joined us all said it was well worth the money spent. And again as I published in my previous article about all-inclusive...they can be a pretty penny.
We arrived at Beaches at about 7PM after a 10min drive from the very small Provenciales airport. Unfortunately staff at the airport could do nothing to help with the mosquito-like bugs eating us alive while we waited through immigration (this was the only time we were attacked as such) or the fact that American Airlines is notorious for losing luggage coming in there and everyone received their bags, except my husband. Luckily for him I had reminded him to put a swimsuit in his carry-on for just such an event.
At the lobby of the French Village, which is separate from the Main Lobby, where all other staying outside the French Village check-in, we were greeted by none other than Butch Stewart, the founder of the Sandals/Beaches empire. No, no he had not caught wind of my blog and was there to give us star treatment, but he was there to apologize as they were hosting the "World Travel Awards" that evening, so the restaurants in our area of the resort were closed, but he directed us where to eat and let us know we might here the awards as well as Sister Sledge playing until about midnight.
We quickly found out a few emails I had sent regarding our trip being for a small group paid off as every one's room, except ours, was upgraded numerous levels, so that we were all within a few doors of each other versus across the property with some in the entry level room and others of us in the middle tier French Village. This was also probably due to our Sandals Signature status, which is their version of a frequent guest.
Just a quick note about location. Now this month they were to open a whole other section called the Italian Village, so I am only speaking to before this (Jan20 & waterpark opens Mar15). If we were to go again we would again pay to be in the French Village. Our buffet restaurant, Giuseppe's, never had a wait where the Main Village buffet, Reflections, always did. Especially at breakfast time. Our pool was never crowded and even though no water features it was the largest, so lots of space with a swim up bar, a kiddie pool, large hot tub, and beach entry. And with a bottom floor room we found our monitors worked from the room to the back row of chairs and the hot tub. Another advantage to bottom floor is a patio, where upper storied have sliders, but no balconies. The French Village is also closest to Pirate's Island, home to Bobby D's the 50's diner and the kids' pool. We did not mind we were the furthest rooms from the beach as with all the eating and drinking the walk was needed.
Regarding restaurants. Our adult-only favorite was Sapodillas for great food. For fun and laughs...Kimono's. And if you do the Sushi Bar it is merely OK...UNTIL you let the chef know you love Sushi and let him go free-lance and then it was really good. Arizona's was our lunch spot as they always had jerk chicken on the BBQ and paper plates and plastic cutlery to dine pool-side. And our evening routine quickly began to include Bobby D's for the kids as well as the late night stop as it is open from 11AM-6AM. We would take them to dinner and then drop them at Kid's Camp which was open until 9PM (their website says until 6PM, but not that case when we were there) and then we would enjoy a dinner without them. Another do not miss was Friday night when they the meal moved onto the beach where there were about 20 food stands set-up serving local delights as well as the usual munchkin favorites of chicken nuggets, etc.. Also two bars, ice sculptures, bean bags tossed around bonfires, and huge stage show with the Sesame Street characters as well as various contests and fun. And if you are looking for an adult only drink the happening place was the bar in the main village right across from Reflections.

Kids Camp...remember I have a two and four year old, so they were in the youngest area, but camp does go all the way up to teens. Security was amazing as was hygiene at the facility. The staff was great with the kids...quickly learning their names and their individual needs. We generally used camp every morning, so we could dive or do some other sport, and in the evening's for dinner. Morning time activities included such things as exercise with Elmo, dance lessons with Zoe, rubber duckie hunt with Ernie, and baking with Cookie. Remember, this place is affiliated with Sesame Street. So every other evening there was a 1/2hr stage show in the French Village which usually involved child participation.
On to the activities which are included on the resort. We windsurfed, hobby-cat'ed, scuba-dived, water slid, swam, built sand castles, worked out in the gym, snorkeled, took glass bottom boat rides (in fact kids 4 and older got to do it one day at camp as well), played volleyball....and the list went on. There were numerous dive options...1 tank...2 tank...etc. We stuck to 1 tank dives as they stayed in the Bay and therefore we could be out and back before picking up the kids for lunch. 2 tank dives went around the south side of the island and took from about 8AM-2PM. The dive gear and crews were really good. We had to do a brief skills test before being allowed to go out, but it only took 1/2hr. The diving was good, but not as great as we had hoped and knew it could be. We learned that a private owner who had brought in a bunch of sand to build an island on the point had the breaks put on and then Hurricane Ike had washed all his sand into the Bay therefore leaving quite a bit deposited on the reefs. But you will see from the slideshow still quite a few neat things to see. We also took snorkel gear from the resort and ventured about 5minute walk up the Beach to a reef discovery zone where our kids even got to try their hand at checking out the sea life.
The staff was amazing. Many getting to know us and our children by name. We could easily ask for special items not available on the menu or buffet without an issue. You could also ask for anything to go...to take back to your room...or in my case to a parade one evening my kids wanted to see, but I wasn't done eating yet. They were always checking in on us to see that everything was OK. And all of this is done without the expectation of a tip...as it is not allowed. 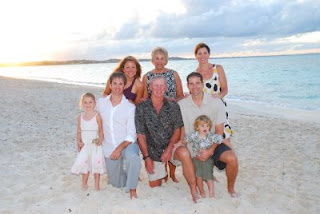 So after 8 nights we were ready, but still sad to head home. Everyone enjoyed it and agree we will return one day.
Posted by A. Jolly at 1:32 PM