Ok, this is a bit of a departure from my traditional truly active travel vacations, but think about it...Disney is definitely it's own classification of active only it can be. 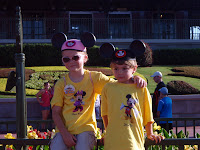 We live in California where families take trips to DisneyLAND sometimes once a year. We have not been yet. But as we would be spending the entire month of June basing out of Indiana we decided this was our chance and probably our only one to visit DisneyWORLD. It also needs to be said our children’s paternal Grandfather who is a big kid himself has always said when we go he wants to go.

That would be me as far as this trip was concerned. Now I plan multiple trips a year, write this blog, but Disneyworld scared me to death. I mean the complex has grown so much since I went in 8th grade a few years ago and Epcot was new. For perspective the cast members (Disney’s name for their employees) shared the following facts during our visit:

Are you breathing hard yet? For me who likes trips to be well researched and go off with minimal issues I was near anxiety attack stage.

First I turned to my friends who had been there before, perhaps even multiple times. They gave me many websites for my reading/panicking pleasure such as: mousesavers.com, disneyonadime.com, a complete guide to disneyworld

After reading several I found myself circling back to Small World Vacations, Inc as booking time neared.

The travel agent assigned to me helped me maneuver booking the right package for our group which would include 3 grandparents and our family of 4. She would also help me manage 2 hotel changes…1 on paper…and another mentally. I also price checked her quotes against Disneyworld's own on-line booking system and she definitely saved me some money.

So where to start with lodging...If you can afford it, and you should be able to as there are all levels of pricing, stay INSIDE the Disneyworld property. Some of the amenities this affords you are:
Speaking of hotels. Just inside of the Disneyworld massive property your selection is endless, from value resorts to the deluxe ones. We decided with our party of 7 it would be better to try to get us all into one room versus 3 separate rooms, so our selection was narrowed to properties that would have accommodations with 2+ bedrooms. We initially looked at the Tree Houses at the Saratoga, but eventually ruled it out due to the amount of walking required to get anywhere for the youngest and oldest in our party. Then we briefly entertained a 2 bedroom at the Saratoga, but opted out for its distance from the Magic Kingdom (as we have a 5yo & 3yo this would be our most visited theme park) and eventually landed at The Villas at Disney's Wilderness Lodge.

Excellent decision! Magic Kingdom was a 5min boat ride away with boats every 20-30min. And a little insider tip here...if you have already seen the parade...head for the boat back to the hotel just before the fireworks. We were out in the harbor just as the fireworks started booming over the castle and our captain informed us with a sheepish grin "Folks we will have to hold here for oncoming traffic." And we enjoyed the entire display from a amazing vantage point. We would apply this same tactic just before the electric boat parade and again we would get to see the entire thing from the water almost right next to it. The farthest bus ride to anywhere was 30minutes more because we shared the buses with the Grand Floridian and Polynesian resorts not because of distance.

The accommodations were wonderful 2 huge bedrooms, 2 full bathrooms, kitchen, living room, 2 decks, and laundry. The hotel amenities were wonderful as well. 1 large pool with a waterslide where every afternoon a cast members led fun games, crafts, etc for the kids. There was another smaller pool with bubblers located through out which was a bit quieter for the 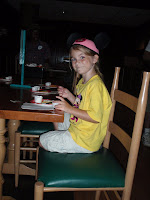 adults enjoyment. The Cubs Den provided free crafts every afternoon from 2-4PM. And you could book them as well for evening childcare for ~$10 an hour with dinner included. We also enjoyed free cookie decorating each afternoon at the Roaring Fork, the

quick service, ala carter restaurant. Also on site was a arcade, bike & boat rental. Free nightly movies on the beach. The Sturdy Branches Health Club to work off the treats consumed at the parks. And if you ventured out to the boat dock at about 9:30PM you could catch the electrical light pageant. Forget something … on site was the Mercantile which had of course your Disney souvenirs, but also some food and toiletry items, which were not marked up too horribly.

We were very, very happy with this hotel. And if we ever did decide to return with our family of four we would certainly entertain staying at Fort Wilderness Lodge in their standard hotel rooms located in the building right next door.

OK, shew anxiety level coming down as room reservations were made...stay tuned my next installment will be tickets & dining/food
Posted by A. Jolly at 8:48 PM