When Parent GOes without Child

We have left our children for 24-48hours before. And in preparation for this summer my husband 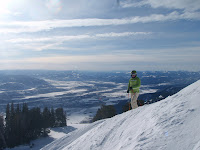 talked me into going to Jackson Hole, WY for a 3 day ski trip without the munchkins this past February. So I would be emotionally ready with our 9 days away from them this summer.

Last year we started researching a trip to get away during his 8 week sabbatical which only comes every 7 years. During the last one, prechildren, we had done 3+weeks away on a multi-sport in Australia & Fiji. But now we have two little persons that not only carry half of each of us in their genes, but in their hearts. So even though we knew it would not only be good for us, but good for them and the grandparents with whom they would be staying 2 questions loomed large before me…how long can I leave them and how far away can I go?
Luckily I had an alter ego…a good girlfriend who did the trial run for me. She is a good friend, one of the inspirations behind this blog, mother, traveler, and basically a “me” with blond hair and a few less inches of height. In fact the alternate me even swapped due dates with me on our first children. She had her boy on my due date and I my girl on hers…10 days apart. She embarked on an adult only trip for 15 days to France last year leaving her boy with the grandparents. Now one other difference between us is she works every day and travels even ever so often for work, so when she said “15 was too long and France was too far.” I knew my destination needed to be a bit closer and my stay shorter. So with that we decided on Costa Rica for 9 days, including travel to & from.
Next decision…do the grandparents come to our home or take the kids to theirs? Our children only see their grandparents, who live half way across the country, every 3-4 months and their home once a year. So we decided to go with the grandparent’s home. The novelty of their home would buy them a couple of days of interest. The biggie for the decision though was having he grandparents on their turf. Where they were comfortable to drive, not only to places of pleasure, but to a hospital in case of an emergency.
S 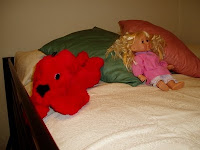 o for 3 months we counted down the days till we would go to Grandma and Grandpa’s. Behind the scenes we were mapping out adventures for the kids while there once the house novelty wore off. The grandparents also hit the yard sales for 2 bikes and borrowed DVDs, toys, etc from other local grandparent friends whose grandchildren visit more frequently than us. And on our end at 2weeks out we packed a box of favorite toys, stuffed animals, etc and took advantage of parcel post and sent them ahead of us…so a bit of home could be waiting when we got there. In fact it arrived early enough Grandma took a picture of the stuffed animals awaiting their arrival on their beds and sent it over email. Now the excitement was at fever pitch.
We arrived in town 2 days before we were to depart again and spent time settling the kids in and shopping for their favorite snacks, foods, toothpaste, etc.. We also made a countdown calendar for our trip and hence our return to them. Each day showed what we would be doing or where we were so we would have a discussion topic when we spoke to them. Speaking of which…the Internet age has made that piece so much easier. Thanks to VOIP (Voice Over Internet Phone), Email, Text Messages, Cell Phones, and Skype we were able to communicate almost (exception when we were in the rain forest) using one method or another.
Our last step before departing which wound up being a massive one…that would work, but we would also learn from would be to prepare for an emergency. We left copies of our insurance cards as well as a letter stating the grandparents were given the right to make health care decisions in our absence. And here’s where I must take a deep breath.

Our trip and preparation was perfect. The first 7 days were wonderful 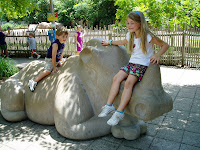 for all. The kids enjoyed all their adventures and we ours. And via our modes of communication we shared pictures, video conferences, etc and discussed them all. Until Day 8. We had been in the jungle for 2 days and returned to hear our daughter was ill. Day 9 our last day we called to check in to find she had been taken to an emergency room. And within 2 hours we would learn she was being ambulanced to a children’s hospital for an emergency appendectomy. And here we are in Central America.

The grandparents were armed with the insurance cards and thanks again the modern age we were in constant contact to help make decisions regarding hospital choice, etc.. We even gave our verbal consent for the surgery over cell phone to the surgeon in Louisville, KY while awaiting our flight in San Jose. We had been 99% diligent in our preparation. The 1% miss was that last statement. Now as her condition was life threatening they would have performed the surgery without our consent. HOWEVER, in a less life threatening event had they not been able to reach us it may have been delayed. But you say you left a letter giving the grandparents rights. Well, to make the letter fully legal and actionable we should have had it witnessed and notarized.
I don't mean for this story to scare you or discourage you from GOing without your child. I believe it is healthy for all involved for these parent-only trips. My story is to only help ultimately put your mind at ease for the longer, farther trips. By sharing my 1% miss you can now be 100% prepared when you as a parent GO without your child.
Posted by A. Jolly at 9:44 PM

Comment via Facebook
My girls have spent several days with my parents when we lived in Alabama and a letter wtih insurance card copies always went. I had no idea to be totally useful it needed to be notarized. Thanks! Can you do an open date letter or does it need to have begning and ending dates on it?

Chris every letter template I have found on line since this happened has had a start and end date.

Avis, read the blog and was glad to see that you covered how to deal with an emergency when you were so far away. My husband and I used to take our teen nieces on vacation with us. We had copies of insurance cards and a signed letter saying we could seek medical care for them. We never had to use them. Glad to know that when the next niece gets old enough to go with us that our letter should be notarized. Thanks for the info.

Caretakers of your children should probably be reminded that information concerning emergencies (symptoms of appendicitis, choking, etc.) are only fingertips away via your computer. Caretakers should also be aware of any SERIOUS allergies such as bee stings, peanuts, etc. Too much information may seem like "overkill" but remember, it is always best to be safe than sorry. Who would have thunk a 5+ year old (Ally) would need emergency surgery for appendicitis.

Avis,
You did a tremendous job of planning; as always. I so thank you for sharing the 1%. We too have been told that without a notary stamp, Medical POA's are not valid. Typed my own, but would love to see the template you chose...in case my letter left an item out..

Ness, I am liking this one:
http://www.documatica-forms.com/usa/child-medical-consent/form.php
Plug in the info and it builds the form/letter.

As another suggestion for templates... We've been using Quicken for budgeting purposes for years, and this year added on Quicken Willmaker Plus as it had easy templates for just this type of thing (and wills, pet care, school/babysitter information etc). The thing I like as it's all the same program when you have multiple children, multiple grandparents etc I only enter all the information once then can pull the information into whatever document needed.