Being Flexible While Traveling....

“The best laid schemes o’ mice an’ men. Gang aft a-gley”. Or to translate, the best laid plans of mice and men can still go wrong.  No matter how well you plan, there is no guarantee of success.  By the way “Gang aft-a-gley” means “goes wrong”. Having traveled extensively we have really tried to keep this in mind, but me of my has it really been tested during day 4 & 5.  Add that to what is called "island time," which has truly lived up to its etymology of being a double entendres ....

On the one hand it refers to pace, a certain slack attitude towards the clock. But it also refers to time well spent, away, in a place that refreshes the spirit and cleanses the soul. 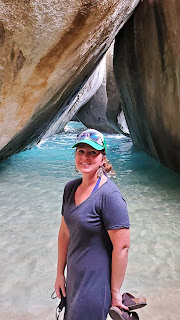 Day 4 had us up early heading for Road Town and the Sensation Ferry to Virgin Gorda. We were loaded down with snorkeling gear to swim around the famous Baths, which we had visited when last here in 2016. We had a car booked so we could move about more easily as we have learned flexibility is key and things are not what they seem during a pandemic. Meaning call ahead no matter what the website, Facebook, or Trip Advisor says about operational hours. We booked our tickets on-line and parked about a city block right on the water and found everything easily. Once sanitized we headed to the top deck for the 25 minute ride over...where the kids quickly found the wifi.

Upon arrival we were greeted by eager taxi drivers, but we informed them we had a rental and were headed to Virgin Gorda rentals. A short 2 block walk from the terminal we turned up the alley marked with their business sign when up behind us came one of the taxi drivers honking their horn like mad. I thought we must be in the way so I yelled to the kids ahead to get over to the side, but then he sticks his head out and yells..."hey man I am just trying to help you." We circle back to his car to find out the rental company owner tried to call Andy on the way over and he would not be able to help us today...his Mom was ill. So he had hooked us up with someone else. Hmmm.... well, we've always gone with the belief most of the people in the world are good. And right again...sure enough after several calls up drove a smiling young man who had tried to intercept us at the ferry, but different from the US you do not tell them when you will pick up the car...you simply tell them what your ferry departs your place of origin, so he thought we were on a different one. Then minutes later up pulls another guy with the car and the paperwork. Super great guys! L&S was the company. And another nod to this welcoming and trusting community...just leave it in the ferry terminal unlocked with the keys inside.
Off to the the Baths National Park we were nervous as there was some serious waves coming in from the North. So we were hoping at least Devils Bay which was a little more west exposure might be OK. NOPE! Red flag. No one allowed in the water. So we paid our entry fee and proceeded to walk, climb and wade through the amazing rock boulders. Still an incredible experience. Then when finished we went to the Top of the Baths...which was a small set-up of restaurant, bar, stores, and a freshwater pool to swim in. We were the ONLY people there, but the staff happily greeted us...took our temperature and sanitized our hands, and guided us to any table of our choice. We enjoyed drinks, some snacks, and a dip in the pool. And the staff was super excited when we even did a little shopping in one of the boutiques. The initial reason by the way we stopped there was for free wifi because teachers had told Ally she could Zoom into class, but in the end with testing they canceled all of that, so the kids, especially Ally taunted friends who were in school with texts or snaps. Now for the record they are both doing their school work from here. 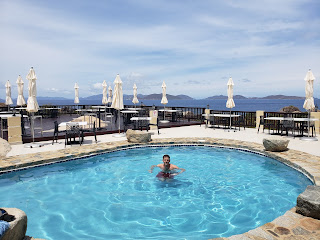 So...choices...do we head back on the earlier ferry and cut our loses OR do we look for another spot to spend our day.  On the dive boat a day earlier the locals had told Andy to try Savannah Bay.  This incredible bay was not one for snorkeling on this day, but the waves were perfect for a little body surfing.  And again we had the entire beach to ourselves.  No chairs as these are more like parks we did note some of the trees/bushes had been trained to be natural cabanas, so we threw out our blanket and used the beautifully painted tires with little messages to hold the corners and sunk in for the afternoon.  We all even managed a big nap, which left Ally with some very sunburned legs.  A quick bite at The Bath & Turtle/Chez Bamboo where kids enjoyed pizza and Andy and I shared a Caribbean Burger and a Virgin Islands Summer Ale. CocoMaya the most famous restaurant on the island was closed on this day and our rental car guys had recommended this place. 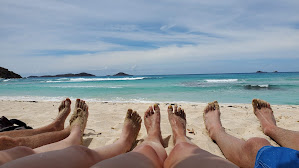 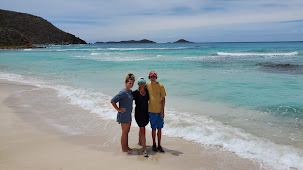 The 4:45 ferry had us back at our house in time for Andy to do an incredible sunset SUP. 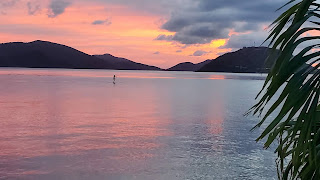 Day 5...which is also 72 hours before our return flight meant another COVID test.  There is no information on how to make this happen, other than I heard from some other Americans you go to the hospital again.  So I called the COVID hotline and they took all our information and told us to show up at 10:30, so they could clean everything after the quarantined people from the early morning were done.  Uhhh...that didn't work too well...there were lots of people arriving when we were there that were coming for their Day 4 test.  The other thing that didn't work...paying with credit card for the $70 test.  They had only one person inside the hospital doing transactions at a rate of 1 every 5-10 minutes.  And after 90 minutes the lady walked out and called "Jolly" and told Andy his card did not work.  So we gave her another card and when she walked out again she called for everyone's attention that the internet was down and they could only take cash.  Oh me oh my...Andy was off to the ATM.  4 COVID Tests, $280, and 2 hours of our day and we were finally on our way. 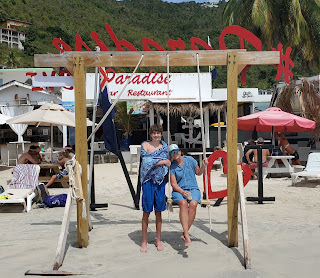 We headed to Cane Garden Bay...the closest to Jost on Tortola where we found one beach bar open (Paradise Club Lounge Bar & Restaurant), but after that experience the word "bar" was all Andy and I needed.  We settled into a picnic table with many others we spotted from the COVID testing to one of our best lunches to date...Mahi Mahi burger for Andy and chicken wraps with a sauce infused with coconut.  A little beach time and we reassessed the rest of the day.
We decided to run the kids back to the house for homework and Andy and I would keep an appointment with Fedrica, the wife of Aragorn a well known local artist and farmer.
Before coming down to the Virgin Islands I had simply spoken "British Virgin Islands" into our fire stick to see if anything fun came up and there was an old documentary about this guy and the metal work he does.  Most notably out of old metal buoys.  He uses a blowtorch and cuts intricate designs and then fills them with wood and other and basically they are gigantic round firepits.  When not a pandemic this place is famous for its full moon parties, but obviously this has all been stopped pretty much since last March. 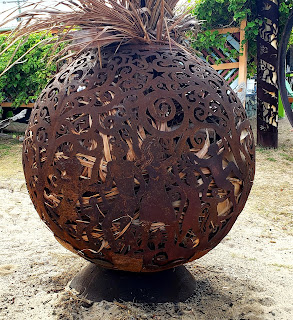 Fedrica, scheduled our visit for 4PM and she texted Andy at 4 and said she was running late from their luncheon.  They also own an organic farm that does boxes and provisioning for chefs on the boats of the wealthy.  Today would be as close as we got to celebrity for when Fedrica arrived she apologized profusely that her luncheon for the Bransons (uuhhh....yes...that one) had run over.  We simply nodded and said no problem, but not surprised as the documentary actually shared that Sir Richard Branson had commissioned Aragorn to do a fireball for Necker Island and it is said to be cut outs of the island's famous guests.
We opted for 4 shirts that are screen printed with artwork by Aragorn and based on the local environment and culture, a mug for my Mom, a hand-painted ornament, and a beautiful piece of pottery.  No fireball for us...they start at several thousand dollars and that's before shipping and living in wildfire zone probably not a great idea.  We had a wonderful time chatting about the islands, farms, etc...as island time struck again and the piece of pottery I wanted was not logged in the system and then for the second time today the internet was down, but this time she hand-wrote out info and sent us on our way and we had a receipt within 30 minutes after she got home.
Not the days we planned but very nice ones none the less and met some wonderful people along the way.
Posted by A. Jolly at 3:52 AM

I am proud of you all for your patience, flexibility, and sense of humor. Trying times occur, but just look at those Sunsets and Serenity of your time spent with family in such a breathtaking environment. Have loved your blogs. Safe travels home.
ps. am sorry you missed Baba in Great Harbor on JVD. He was onboard when Paul and Margo visited, and Paul caught a Blow Fish. We all had chuckles when the fish 'did its thing' ! Barbara

Still sounds like an incredible day. Wow, those fireballs r the coolest. I like a "mug for mom". See u soon, but enjoy every second. Love