Released and We're Off

Now don't mind that title too much.  We haven't really felt in confinement this whole time.  I mean yes we have not been able to leave our house.  But it's on the beach.  We can snorkel, kayak, sunbath, watch sunsets, and just be together.  The kids would argue the confinement bit was the fact that Mom was rationing food because she didn't want to place another grocery delivery because the delivery fee and prices were pretty steep as it is generally used for provisioning food for week long charters of sailboats and catamarans.

Day 5 we remembered Erik, our cab driver said be patient.  We likely would not hear until Noon.  Noon came and went and around 2 I started to call around.  The FOUR numbers they gave us for the Public Health Department went unanswered.  Hello, we are still in a pandemic.  So I actually found a number for the lab on our Day 0 results (which I never received mine and we figure since an army in PPE didn't descend on our house like the scene out of ET I was good).   Someone answered and gave me the COVID hotline.  And yay someone answered there too and went on to ask me if the lab said if yesterday's results had been released.  I said I have no idea.  She said...well the lab releases ALL the results at once, then the Public Health Department comes in and reviews everything, and emails everyone.  So I called the lab and she said oh no...we are not even close yet and it may be tomorrow.  WHAT?!?!?  We had spent the last 4 days mapping out our plans and needed to get to the grocery or dinner was going to be interesting and also had made plans for a worker to come in special on Good Friday to give us our rental car.

About the time we decided to settle in and eat the last of the pasta a huge rainstorm came and then with sunset a rainbow emerged over our house (I know, I know an optical illusion as Allyson would have to say and tarnish my moment a bit), but 5 minutes later the phone started dinging and 1, 2, 3, 4 ...our releases popped into our email.  Difficulty getting a cab on Good Friday our agent/owner, Bonnie, offered Andy a ride to the rental car agency and an umbrella while he waited in the rain for the worker.  Back at the house we all piled in and were off to the police station.  Two officers sat behind a plexiglass counter.  Once sanitized we held up our passports and the results displayed on our phone one by one.  Then we proceeded to fill out more paperwork and cut off our bands and turn in our GPS tracker in an overflowing box.  Getting dark now we drove out to Sopher's hole, the end of the island and the marina/isthmus the direction we have been watching sun set each night.

Andy's found a new website to watch the winds on and determined we needed to change up our plans for the next day.  We were headed to Virgin Gorda, but the wind direction showed it may not be nice for snorkeling, so instead we would opt for a leisurely morning with breakfast, driving around a bit, securing groceries, and cash, then the afternoon ferry to Jost Van Dyke. 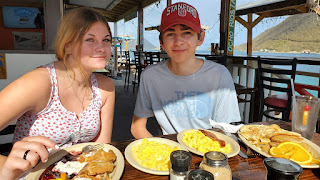 Breakfast, to Alec's pleasure was Omar's Fusion, which is not even 5 minutes from the house, on the water with coffees that are all the rage according to the reviews on social media and their latest post showed all you can eat pancakes for $9.99.  Win-Win!  Once there just as we had been told...we and every person who approached the door was met with a friendly "Please sanitize and ensure your mask is on," then we selected a table on the water.  Prices ranged from $6.95 - $13.95 and YES the coffees were amazing as were the portions.

Next we walked the marina and checked out the Harbor Market, which was pleasantly very well stocked.  But decided we should head to the larger town on Nanny Cay to a Rite Way for an even bigger selection.  We did a little driving, then to the Marina at Nanny Cay where the grocery was and where we found we had made a mistake...the Harbor Market was much better, so we grabbed a few staples and headed out.  We also found ATMs are mostly non-functional.  Not sure if it is since Irma or just since the pandemic and lack of need for them with lack of tourists.  We headed back to the house with about 2 hours before we would head to the ferry terminal and our afternoon adventure. 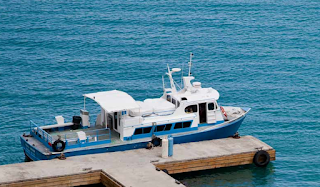 The New Horizon ferry to Jost is only running out of our end of the island, so we thought we might see a few more people, but the 1PM only had us, one other couple, and some locals...as well as lots of provisions for someone named "Amy Jumper - Pink House - JVD."  $30 a person for a 25 minutes round trip we boarded the older ferry.  Not like the ones we took when in St John in 2016 this one was definitely "vintage" with a steel U shaped bench in the open air back then you climbs down some stairs to the ship's hull and there were maybe 8 rows of benches and beautiful teak wood floors (definitely vintage).  Gotta love how the locals love seeing people back...and taking care of their own.  Not even 3 minutes into the trip a guy had come around asking who needed a cab and had us booked $5 ea to White Bay...only a little over a 1.5mi walk, but up and down a steep hill. 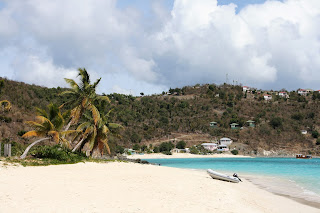 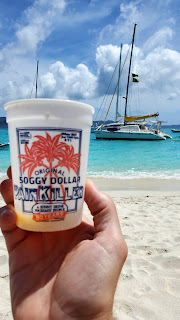 Once in White's Bay a place we had been in 2016 we settled onto a very quiet beach.  Met by staff who helped us move chairs and get settled it was the start to an amazing afternoon.  This Harbor would generally be loaded with boats, charters, tours, etc...like 30-40.  Today there was maybe 10.  And then a handful of us who came on the ferry.  All in all maybe 100 people.  Last time were were here in 2016 there was probably 20X that.  And much to the kids' happiness this slower pace meant the bar could easily combine tabs from their sweet snack bar with Mom and Dad's adult beverage bar at the Soggy Dollar, where we enjoyed the famous painkillers in several versions. 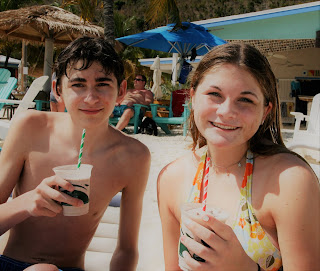 The afternoon was spent chatting with a few visitors...you can just tell everyone is starved for conversation after the pandemic.  Canadians, who are staying permanently to those staying at least a month due to the explosion of cases there and practical closing of the borders.  To Midwest folks escaping the last gasps of winter. 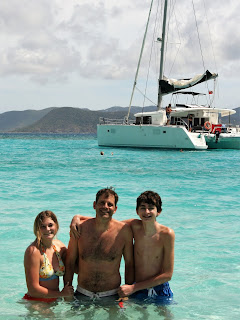 The thrills of the afternoon were due to the quiet on the beach sea turtles and sting rays who normally stay out closer the reef which allow this Bay to be so blue and quiet were right below us and were not phased a bit to have a person or two hanging out.  Go Pros and snorkels led to some amazing experiences captured on film.

4:45 came quickly and the bar called our cab driver for the last and return ferry to Tortola.  With the weekend and the holiday all beaches are closed at 5PM to discourage gatherings and prevent COVID spread.  The bars helped with this by closing down food service at 3:30 and last calls.  A quick ferry ride back we opted for a stop at the more stocked Harbor Market where we picked up more food, including the kids talking us into cookie dough (the last and only tube there) and a big tub of ice cream.  A gorgeous sunset we had dinner and all hunkered down reliving our day through pictures and video.