We woke early in our new holiday park, Wanaka Kiwi Holiday Park.  This one is much busier than any others we have been to thus far.  And much tighter.  That did not deter us from setting up our table and enjoying french toast with Manuka Honey (heated in the microwave as it is more of a paste) instead of honey.  This honey is produced from the nectar of the Manua Tree.  Super delish...definitely bringing home for holiday gifts. 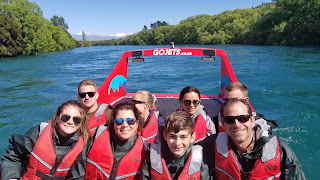 At 9:30AM our next adventure picked us up at reception.  Tracy the very friendly driver for Go Jets Wanaka.  We chatted along the way and learned they had received a lot of rain in the last few weeks.  We did not know how much until we got to the river and learned it is flowing 3x more than normal and is 3 meters higher than normal.  In fact, all geared up in spray jackets and life jackets we climbed in the jet boat and it immediately sucked up an invasive grass that had been set free from the bank with the heavy flow.  We actually had to pull the boat out, remove it from the intake, relaunch and we were off.  Oh my...our driver Pat was great.  The boulders we would usually be dodging in this crazy ride were submerged, so he used the trees on the river bank to thrill us with near misses along with the crazy traditional 360s.  The kids had a blast and even though we were teased initially for our spray jackets we quickly learned well worth it.  The back row was without them and was soaked including we would learn a minor league Rugby player, who we were later told is good enough and should be playing for the All Blacks in a couple of years.  James is all we got on the name as we didn't want to pry.  Super fun!  Highly recommend. 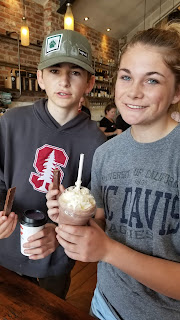 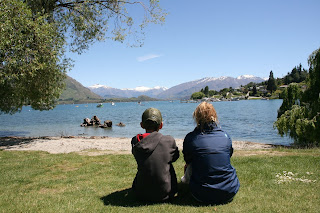 Tracy gave us a ride back into town and recommended a coffee shop, Urban Grind, and lunch places.  We took her advice on the coffee shop and the kids enjoyed not only a beverage, but it was accompanied by a large chocolate stick.  YUM!  Coffee in hand we as usual for our travels found a playground right on the banks of Lake Wanaka and the kids played while we enjoyed.  More walking and sightseeing than a way too big lunch at the Lake Bar, which is also a Monteith Brewery location.  The portions in NZ we are finding are even bigger than American, so yay for more leftovers. 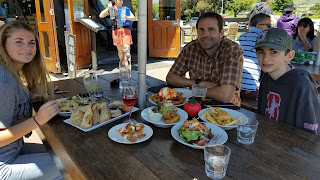 We went to a shop or two and then Alec wasn't feeling well, so we headed back to the RV park, ~25min walk along the lake.  We all got showers, which so far have been free at all the parks.  Yes, out RV has a shower, but the ones at the RV parks have been spotlessly clean, large, and for the girls...have hair dryers.  We also did laundry, which was expensive....$3 NZD a wash and $4 NZD a dry.  Now had we had time the park actually had communal clotheslines.  After a rest, we utilized the one-way (in to town only) shuttle our RV park offers every 30 minutes. 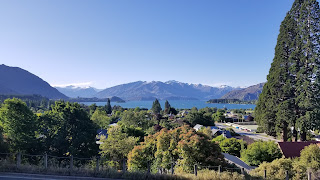 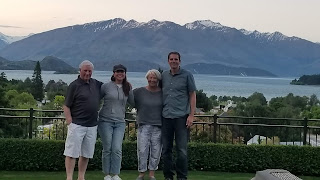 We walked a few stores and realizing our time is really going quickly and we really needed to start getting gifts for family and friends.  But our time was brief as we were excited to be seeing Penny Wilson and her husband John.  Now we are lucky that a lot of times when we travel we take the opportunity of friends living overseas and pay them a visit.  Penny's daughter married a good friend of Mom's from college.  We first met her when they were traveling the US in a VW camper van and came to Tahoe in the height of a snowstorm and stayed and skied with us a few days.  Then we saw them before their wedding in the Midwest.  And after they were married and had one child and another on the way we joined them in Tuscany for several days and then again we paid them a visit when they loved in St John's  Anywho, we always knew we had to look up Penny when we went to New Zealand and are we ever glad we did.  We were spoiled with the most incredible meal and they shared their home, including all the stories behind the art pieces and John's ties to the community.  All of this was with an incredible view of the lake.  We only hope that we can repay their hospitality one day or at least pay it forward to all who visit us. 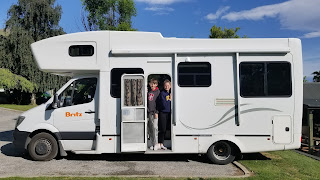 Tucked into bed, tummies, and hearts full, we quickly fell asleep and despite many tempting reasons to stay we decided we needed to head on down the road to Queenstown in the morning.

Reading every word! Enjoy every moment.

Ahhh...thanks Ness! We love it here.