Mom/Avis:  For my 40th birthday I wanted to go to New Zealand.  Andy went heli-skiing that year for his.  But in the end I decided I wanted to go with the kids and wait until they were older so they could really enjoy all it has to offer.  So nearly 8 years later...Happy Birthday 40th to me! 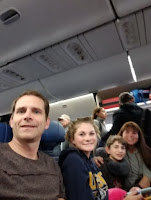 It was a long flight.  We got on the plane and went to the back, coach.  There were lots of crying children.  But there were TVs with a larger movie selection than we have ever had before.  So naturally, we began to watch.  Our goal was to eat dinner and watch 5-6 hours of TV then sleep.  The time difference would only be 3 hrs behind California, but we were a day ahead (21 hours ahead).  We sat 4 across in the middle, so at least we had each other to lean on.  The flight went surprisingly fast and we woke to one more movie and breakfast before landing in Auckland.

We made it through customs…as much as we have traveled, we must admit we can’t believe we are saying this about New Zealand…slowest immigration line ever!  One agent assisting one very long line. Had Alec been 13 we could have gone through the ePassport, but we could not.  We got to our connection to Christchurch just in time.

Christchurch airport was really modern with neat art and spacious areas.  Our favorite place was outside…there were turf areas covered with bean bags for you to wait for your ride.  Our ride was a van to our RV pick-up where the kids sucked down cups of hot chocolate while Mom and Dad learned the rules of the New Zealand road (especially important was how to read the single-lane bridge signs). 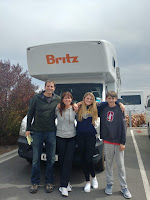 We got our RV and it seemed spacious, but we quickly would fill every nook and cranny.  With our stuff and with food that we got from the market.  We were all happy to get Tim Tams, which Mom and Dad had learned to love on a trip to Australia 16 years ago. 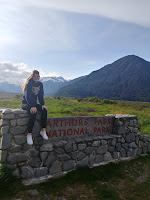 We took Highway 73 or the Great Alpine Highway/West Coast Highway cutting across the country to the west coast.  We saw A LOT of sheep before climbing into the mountains.  We definitely believe the fact there are a lot more sheep than people in New Zealand.   The streams were crystal blue from the snowmelt.  Dad did good driving on the opposite side of the road in VERY WINDY conditions.  Finally, we took a break at Arthurs Pass for Dad to destress.  We rolled into Greymouth just as it got dark with the kids asleep.  A quick dinner and off to bed for everyone at 11PM.

We slept in the next morning and after breakfast took off to the beach a 30-second walk from our campsite.  The beach was rocky.  Alec was thrilled as the rocks were literally perfect skipping rocks…all-rounded and flat from the rolling in the waves.  Alec says it was “aesthetically” pleasing.    Ally the teen found lots of photo ops…getting a bit artsy. 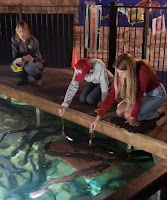 Today would be a slow day with a 40 minute drive to the town of Hokitika, a small art town on the coast.  Which also was a “gold rush” town, which felt a little odd being from California.  We visited the National KiwiCenter.  The staff was nice and kind-spirited per Ally.  The first room was native reptiles, amphibians, and fish. Then as the clock neared 12 we gathered around a huge pool full of freshwater longfin eels.  An employee brought in a plate of cow heart bits where visitors two at a time were allowed to feed them.  We learned the eels lived to be 200 years old and only mating once in their lifetime.  Then we saw the feeding of a pair of kiwis who are part of a breeding program.  They are nocturnal, so we had to be quiet and not use any cameras, but they gave us pictures when we left to remember them by. 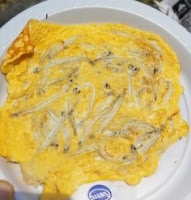 After leaving we had lunch at Porky’s a recommended take away where we tried to local favorite, whitebait fish fritter and fish and chips (which is still wrapped in newspaper).  Mom and Ally walked through jade shops while Dad and Alec hit the grocery for a few items, including the first lamb for the grill.  Back on the road for 2 hours we came to Franz Josef, where we could see the helicopters coming and going from the glacier, which we will be doing tomorrow.

We are staying at Top 10 RV Parks…thus far they have been GREAT!  Clean shower rooms, lots of amenities, and really nice staff.  Greymouth & Franz Josef

This is amazing! We love following your journey! keep the “artsy” photos coming ;) xoxo Liv

Great write up Alec! Can't believe you kids are so tall! Glad you still all travel together and get to see the beauty and opportunities travel brings. The best way to learn about all the different people culture and stuff is to be there! :-) Happy 8years later Birthday Avis! Love, Aunt Kathy