How We Spent Our 4th Of July

This weekend we drove to Beit She'an which is located next to the Gilboa Mountains. We were going to Gan HaShlosha National Park.  An ancient Arab legend claims the park is the Garden of Eden.  This national park has many pools filled with natural warm water from a spring.  So when you go in the winter the water will be swimmable. The year round temperature of the water is 82.4 Fahrenheit. The Amal Stream passes through the park and has been widened into pools. There were many places that we could climb waterfalls (small ones). I even climbed through the old flour mill. Many fish live in these waters to. Some waterfalls bigger fish try to jump up. Nobody setting off fire crackers, but everyone was having picnics and barbecuing. It felt like the 4th to me. 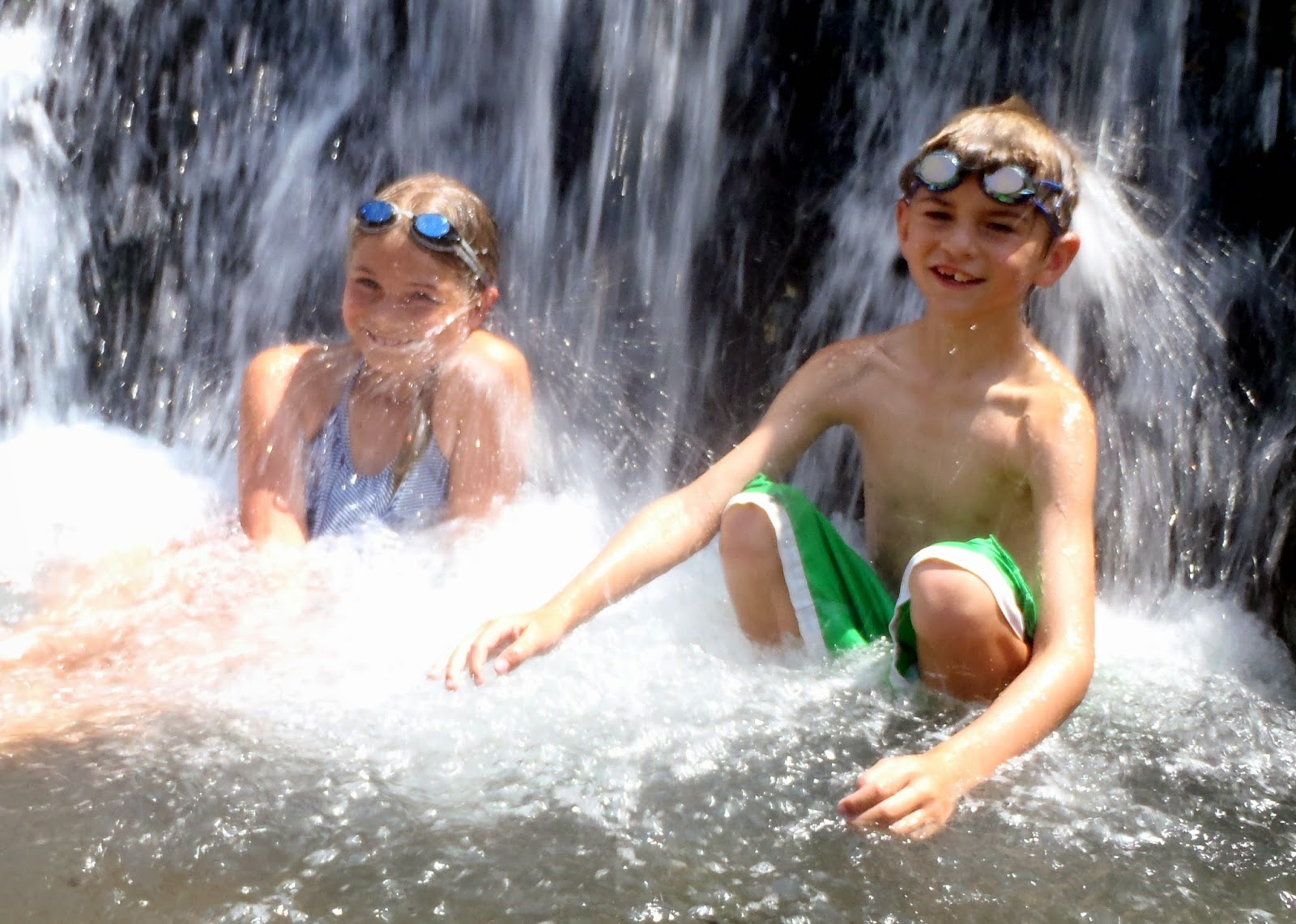 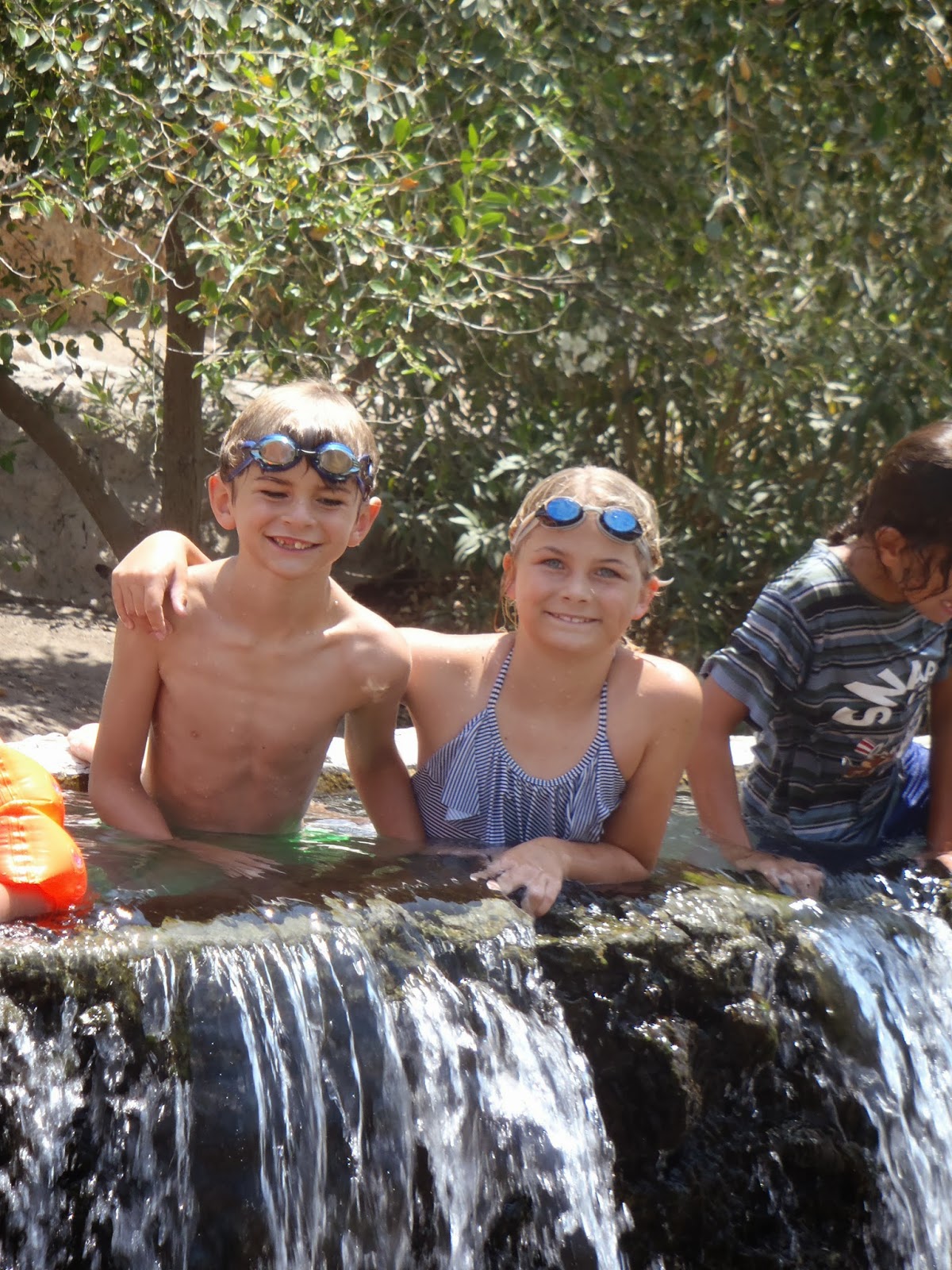 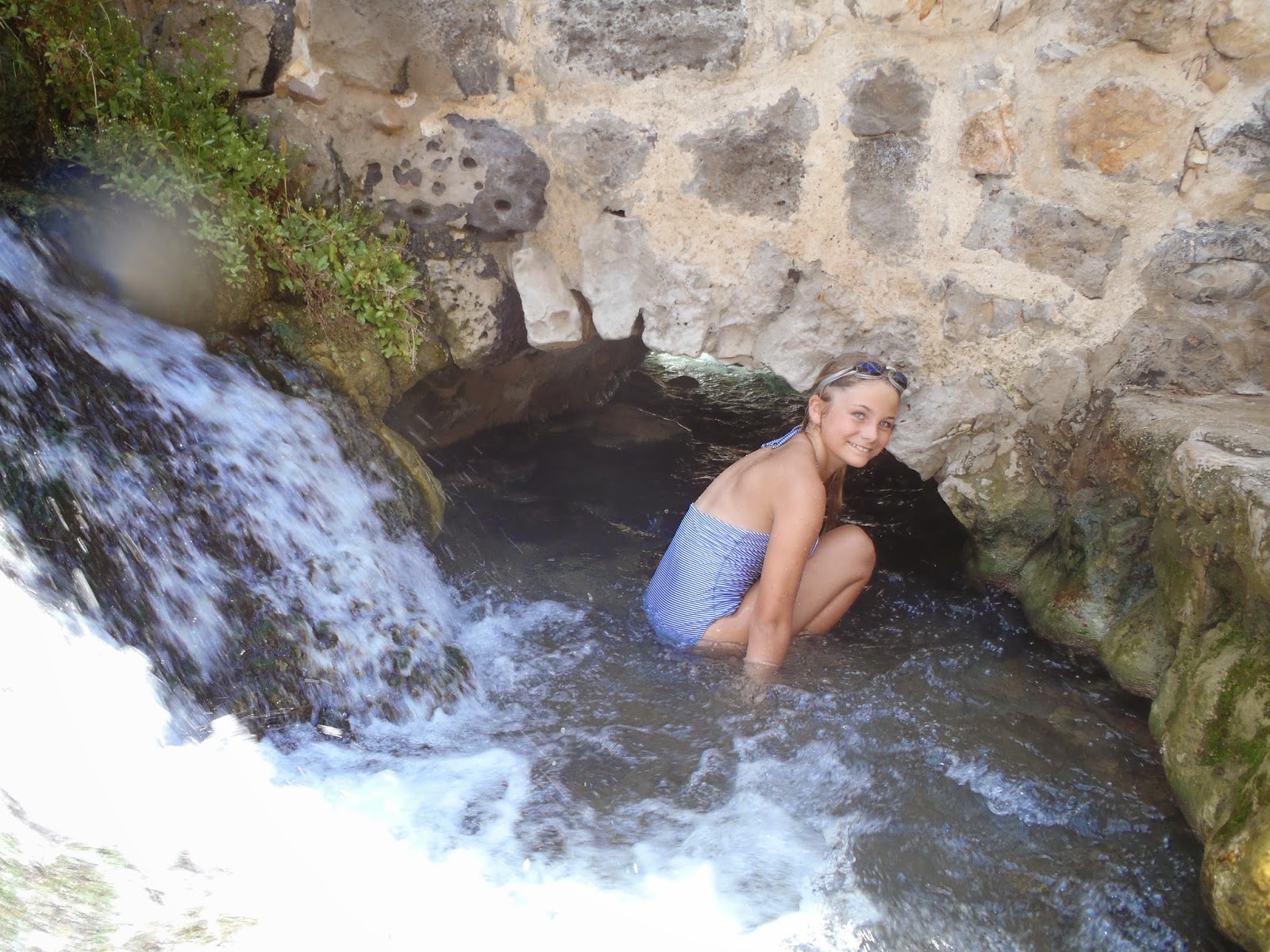 Did you think I would stop there? Nope, still going. We drove to a zoo called Gangaroo. It was an Australian zoo in Israel. In the beginning of the 1990's Kibbutz Nir David decided to build a big tourist attraction.  Kibbutz traditionally is a communal way of living where it's members share the work and the payment from that work and all work together to take care of the community.  Many original kibbutz depended on agriculture and with changing times they have had do other things for their economy.  Yehuda Gat, a member of this kibbutz, in the 1990's started creating relationships with the Australian ambassador to Israel. And eventually Australia agreed to send animals from koalas to big kangaroos over to Israel. That is how the zoo came to be. 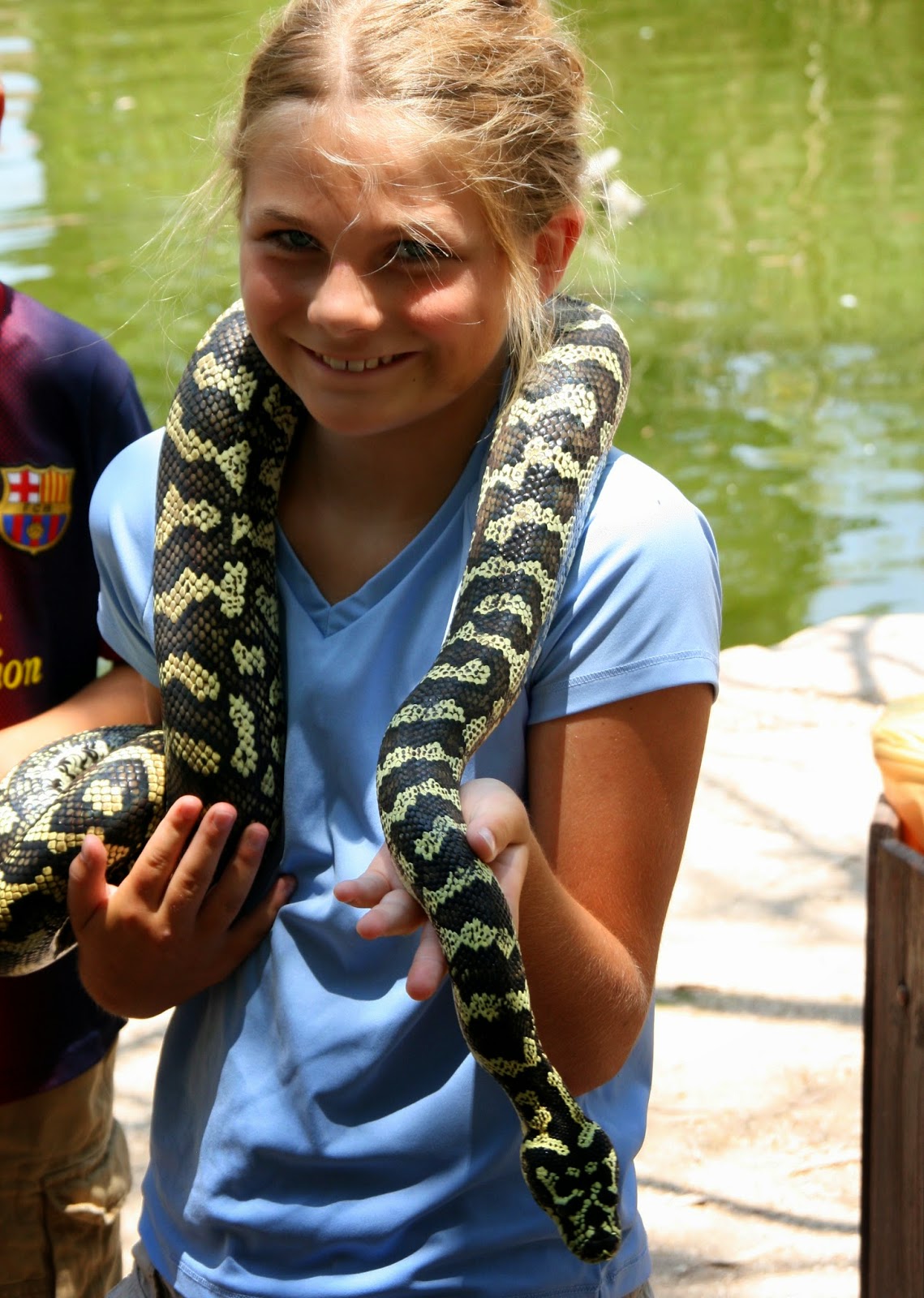 First we held a python. I had a new scarf! Then we saw 2 koalas. One was called Mindy. She was 15 years old, that is old for a koala.  Usually koalas live to be no more than 12 and they die from starvation because their teeth get worn down and they can no longer eat eucalyptus.  Mindy has lived longer than most because she eats baby food and only fresh, tender eucalyptus. HERE COMES MY FAVORITE PART! Next we walked up to a gate. We opened and latched it again and did the other. First we saw nothing but mounds of dirt. They started to move. They hopped around. KANGAROOS! We fed them and pet them. Next we saw emus and went in a room filled with Flying Foxes. We went to the gift store. Mom bought me a pair of opal kangaroo earrings. I can't wear them till I am ten and get my ears pierced. Dad bought Alec a kangaroo puppet. 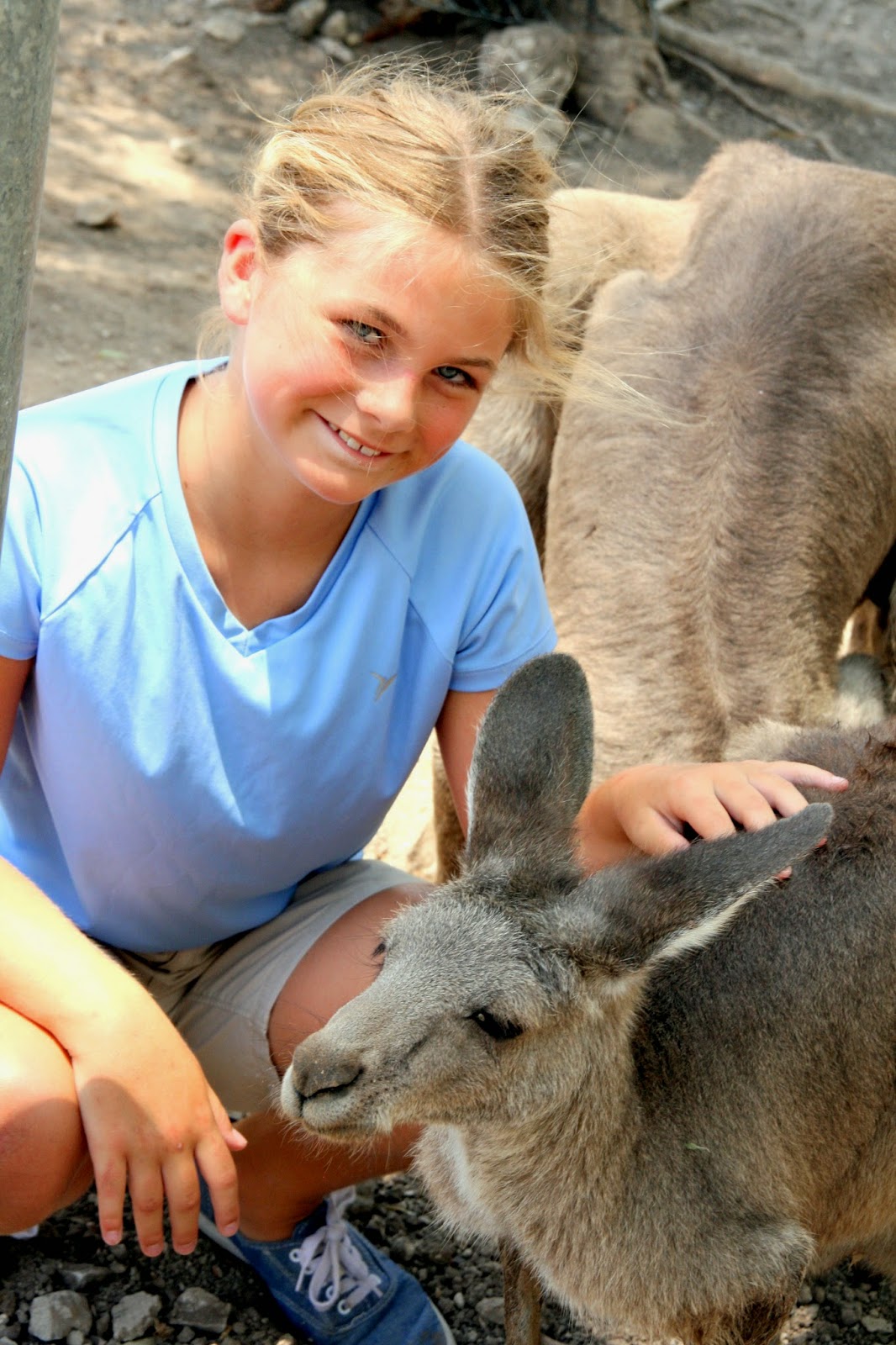 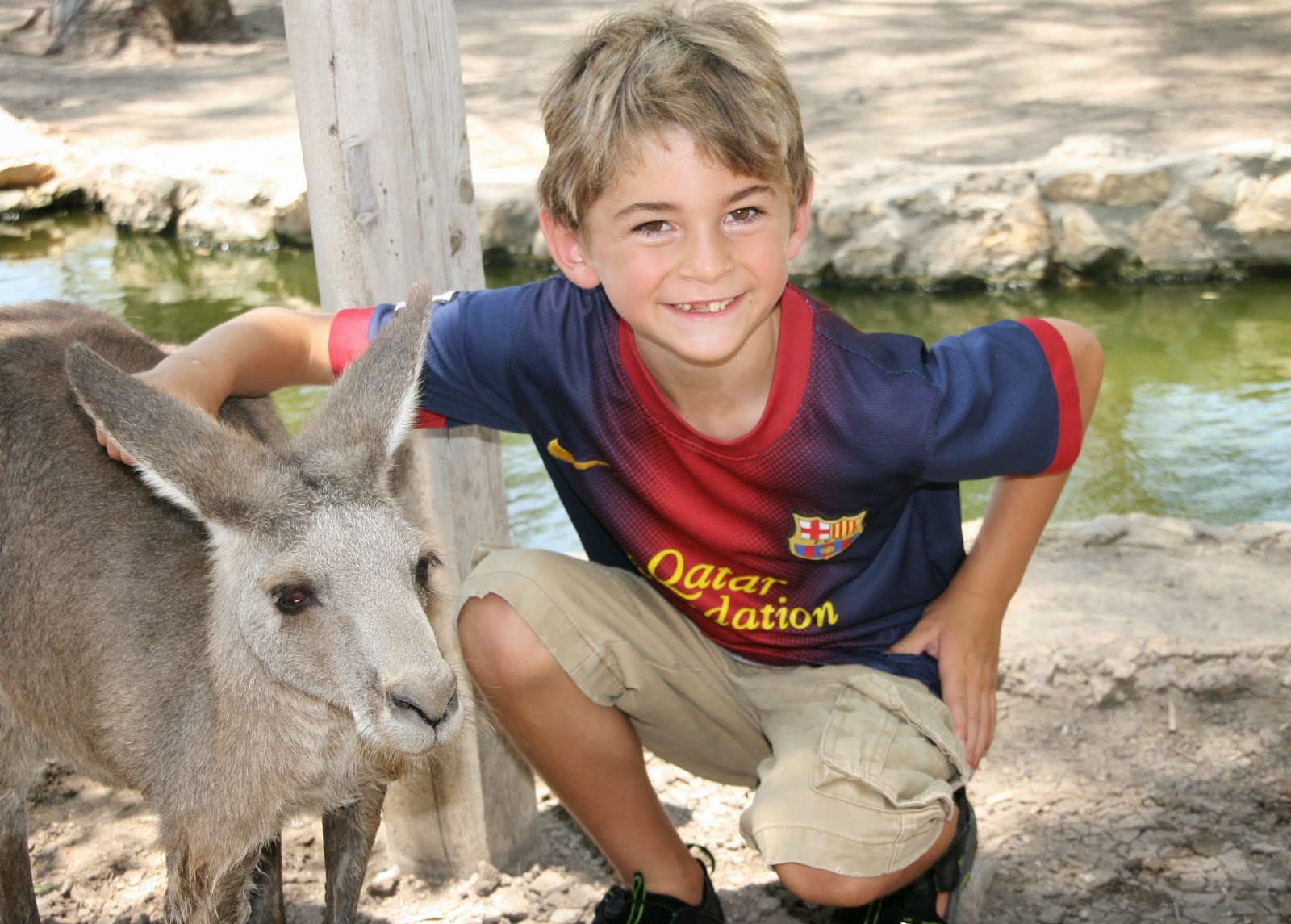 It was a GREAT day.

Facts About Kangaroos (source: National Geographic's AJ Jump Game)
~Kangaroos cant move their legs independently
~They cant walk or jump backwards
~Females are called "blue fliers" because of the blue hue in their fur.
~Some can hop nearly 40 mph
Posted by A. Jolly at 6:46 AM

That is so cool I wish I could do that! What did the flying foxes look like?