Remember the girl I met in Surf camp named Maya. Her mom lived in California for 8 years. Maya has an older sister, brother, and a younger sister. Her younger sister is starting to learn English. Our Moms worked out a couple days where they would tour and hang out with us.  Her Mom remembers what it is like to be in a new city and not be able to speak or read the language very well, so we were very excited to have them as our guides. 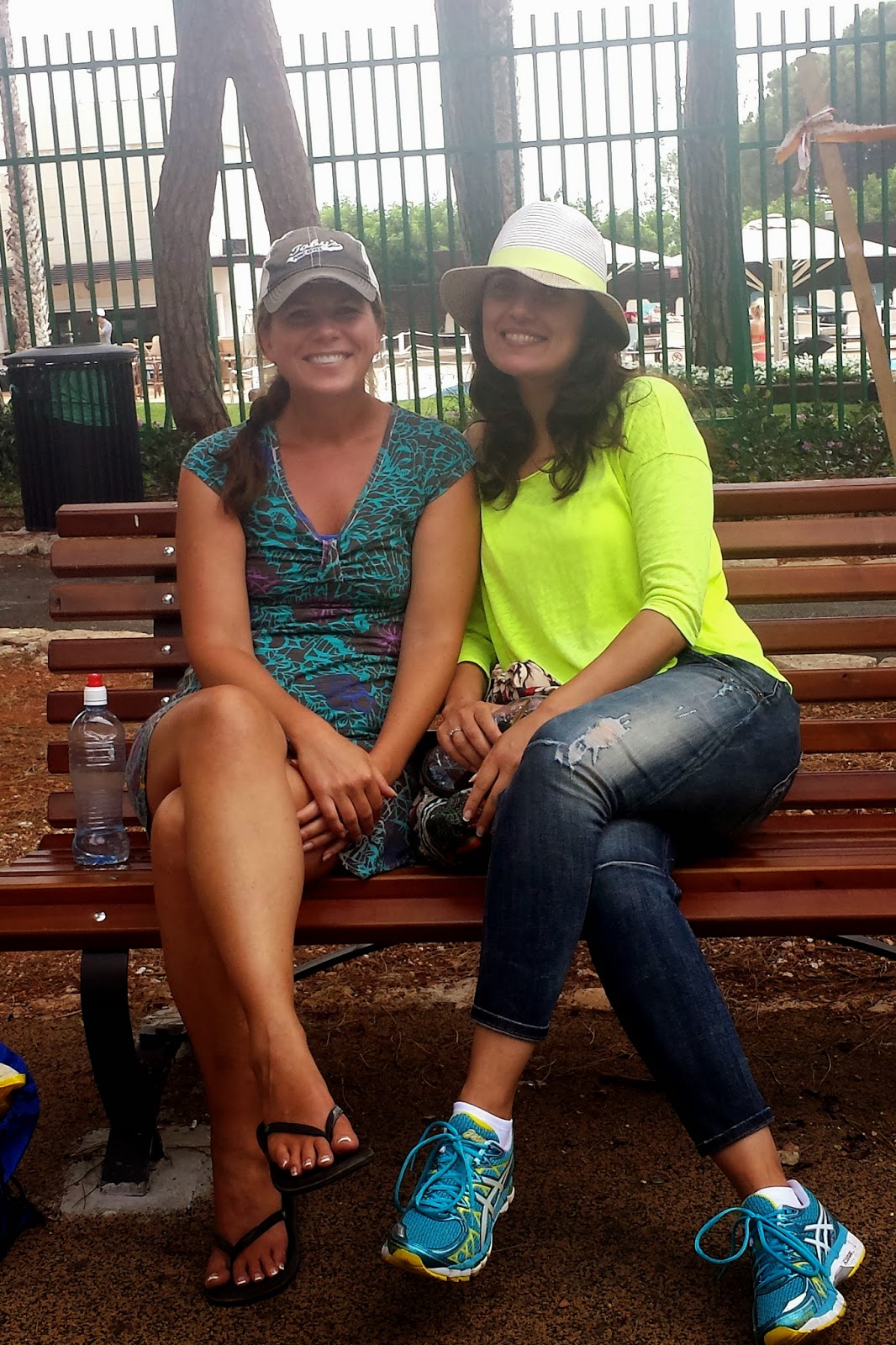 The first day we met them and they brought Maya's younger sister named Guy, which was perfect because she is seven like Alec.  Our first stop was a small grassy field set below the Ein Hod Artist Colony. The artist colony is the only one of it's kind in Israel. In 1953 a group of artists led by Marcel Janco rebuilt the village on ancient ruins. Now it is a home to painters, sculptors, ceramists, actors, and other artistic people. So, what was so important about this little field.  The colony was not open, so we visited this field and the small village that surrounded it.  Maya's family used to have a weekend retreat here to live among the artists.  At first the only thing I saw were huge rocks.  Then I realized that these were sculptures. My favorite one was of a cat that you can climb on. 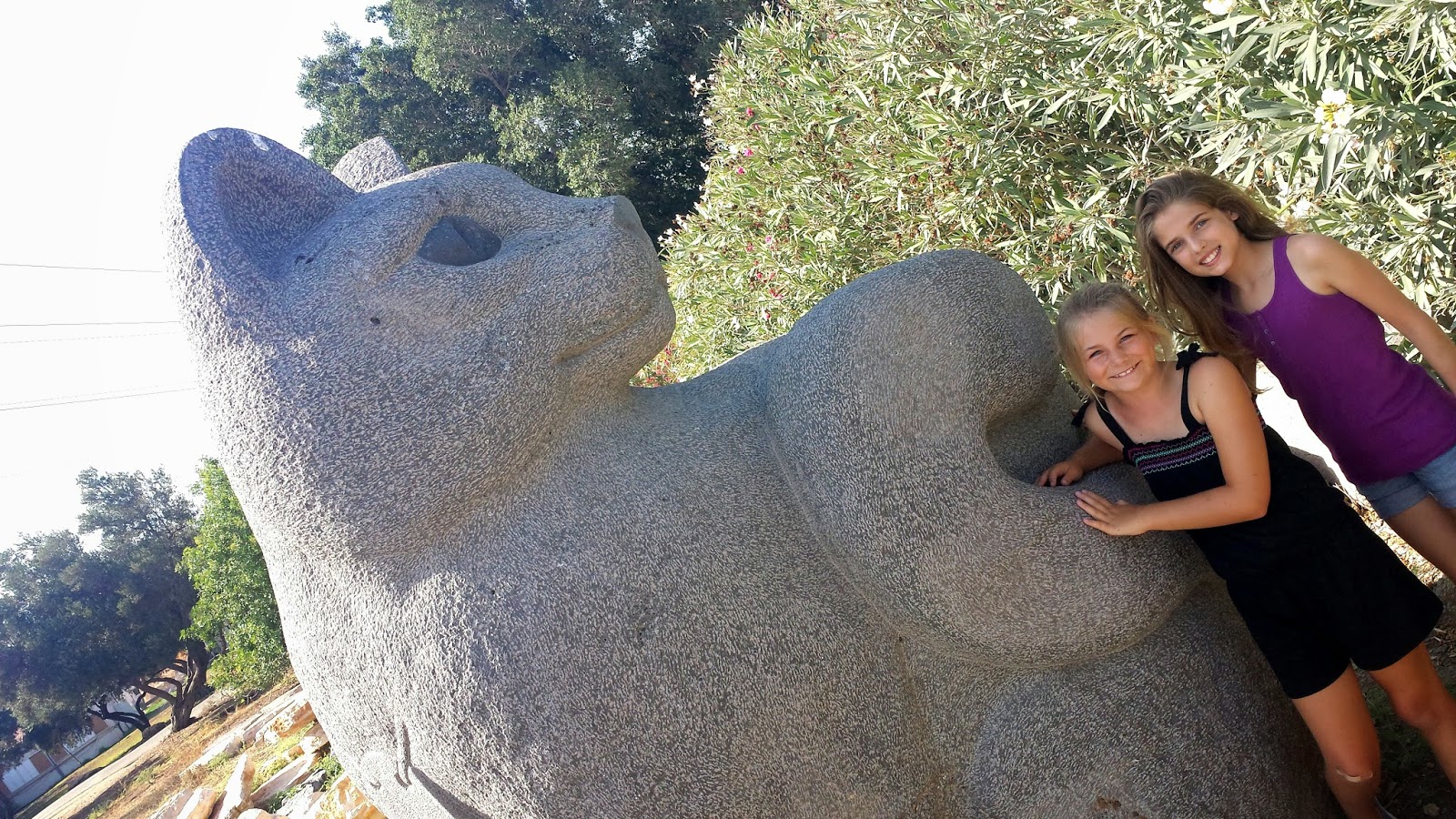 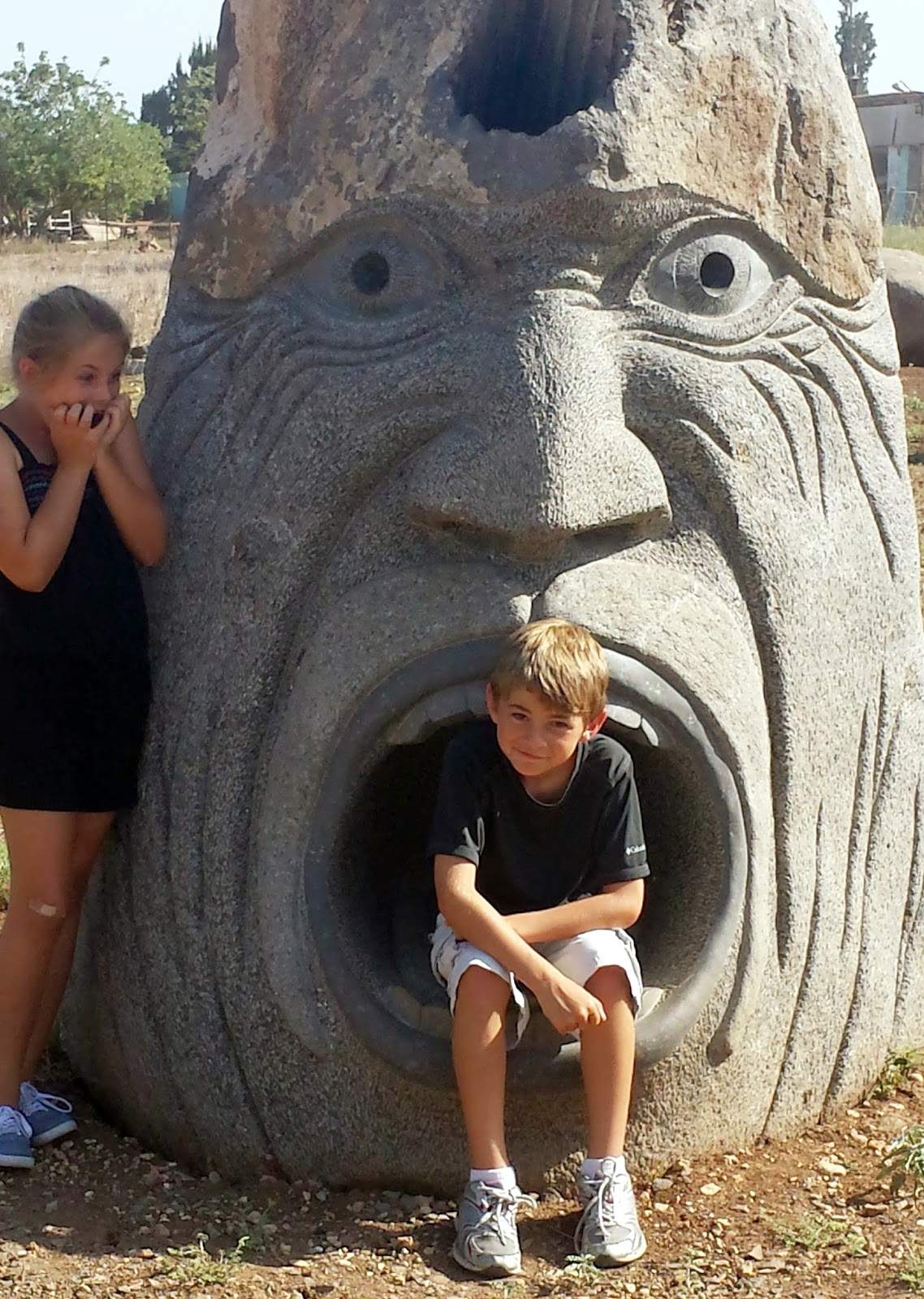 Next stop was the swinging bridges as Nesher Park. Did you know Nesher means eagle.  The swinging bridges are two long suspension bridges that stretch over a deep canyon. We kids loved it because we would run back and fourth on the bridges. It was SO fun. 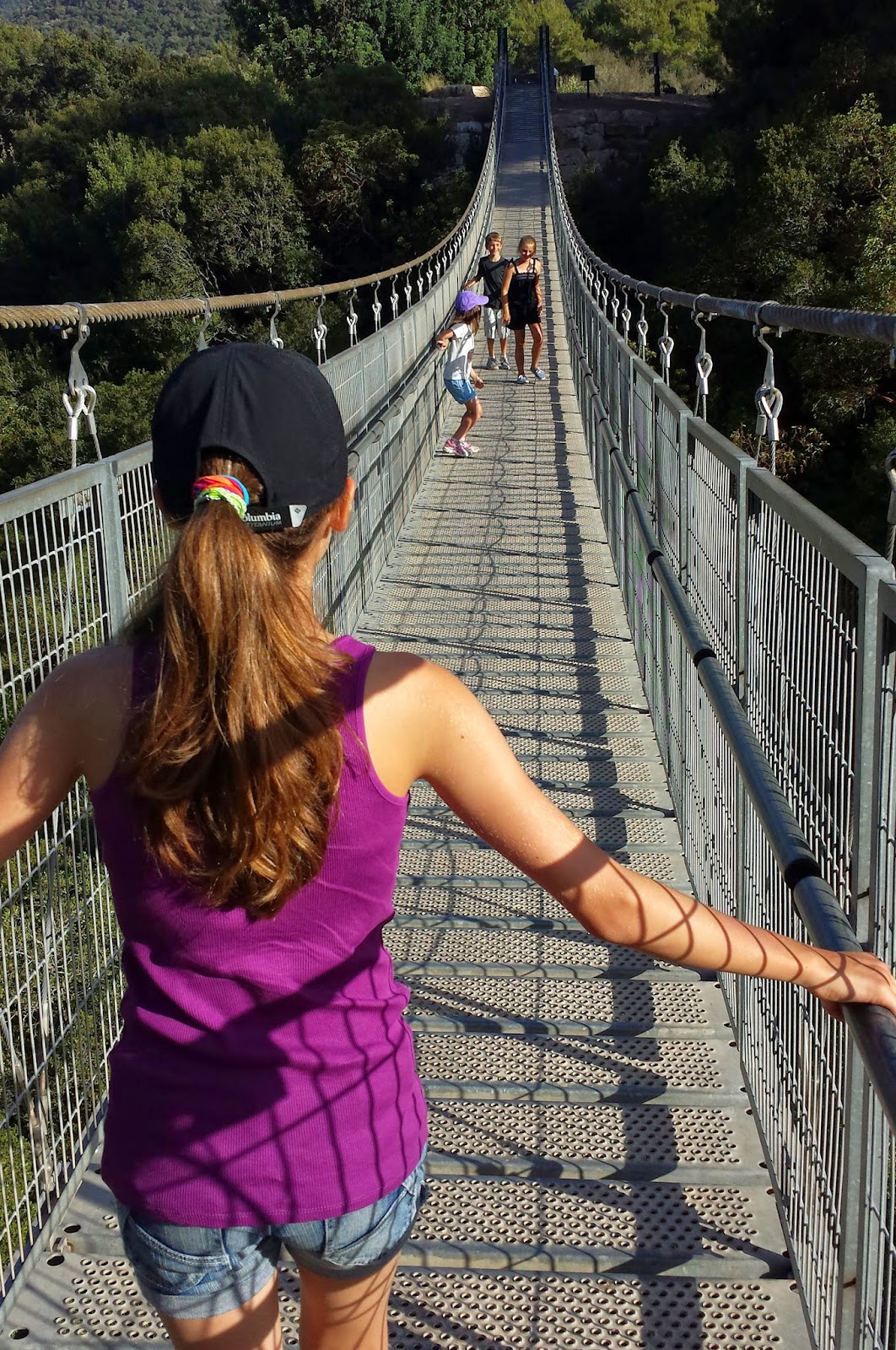 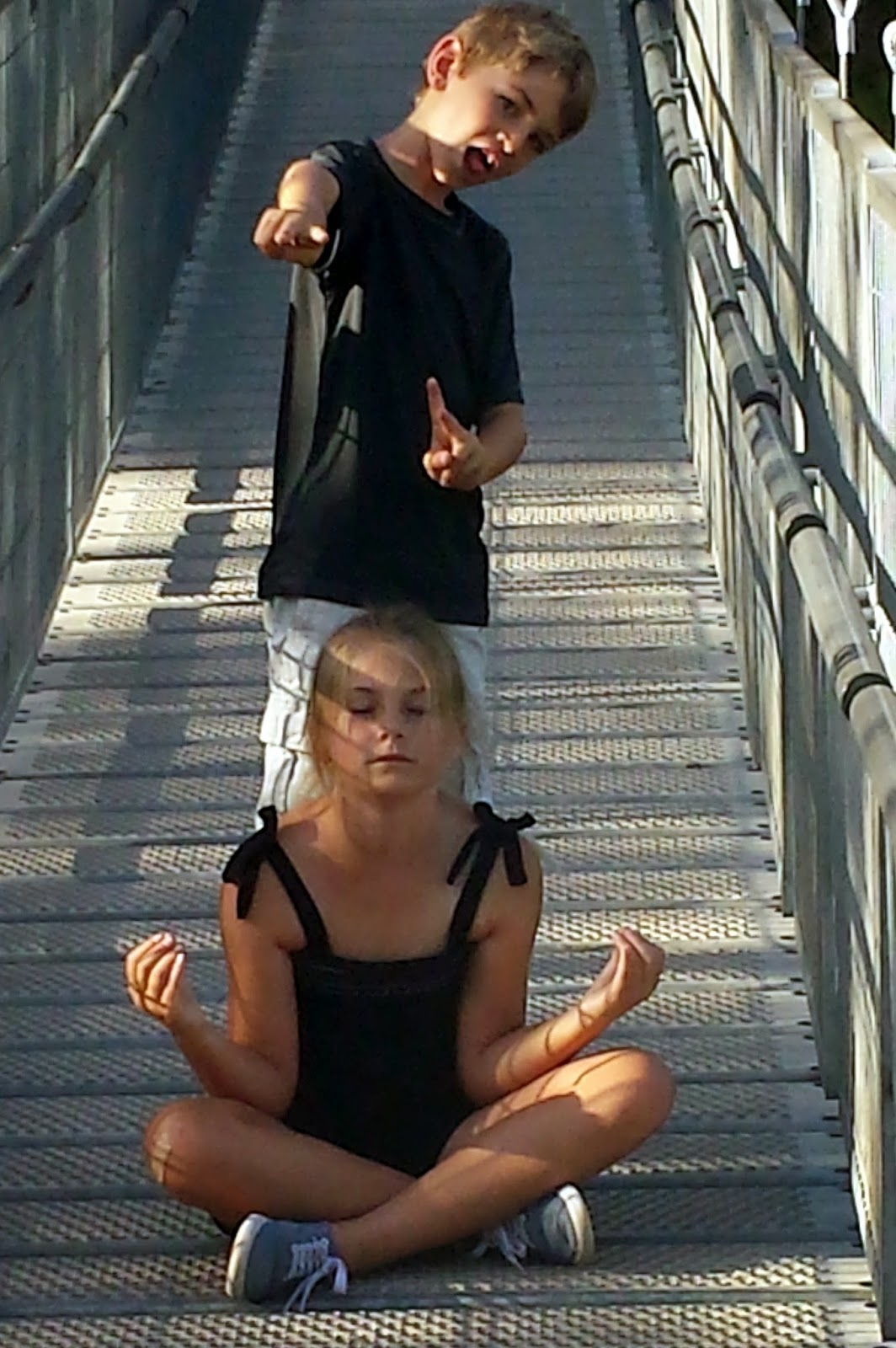 A few days later they picked us up again and we went to Hecht Park.  It is our favorite park and very close to our apartment.  It has a small zip line they call an omega, circle swings with rope bottoms, and a climbing structure. We played there for 2 hours until we were hungry for lunch. We went to McDonald's for lunch.  We may be from opposite sides of the world, but all kids love McDonalds.  Oh and the game rock, paper, scissors. 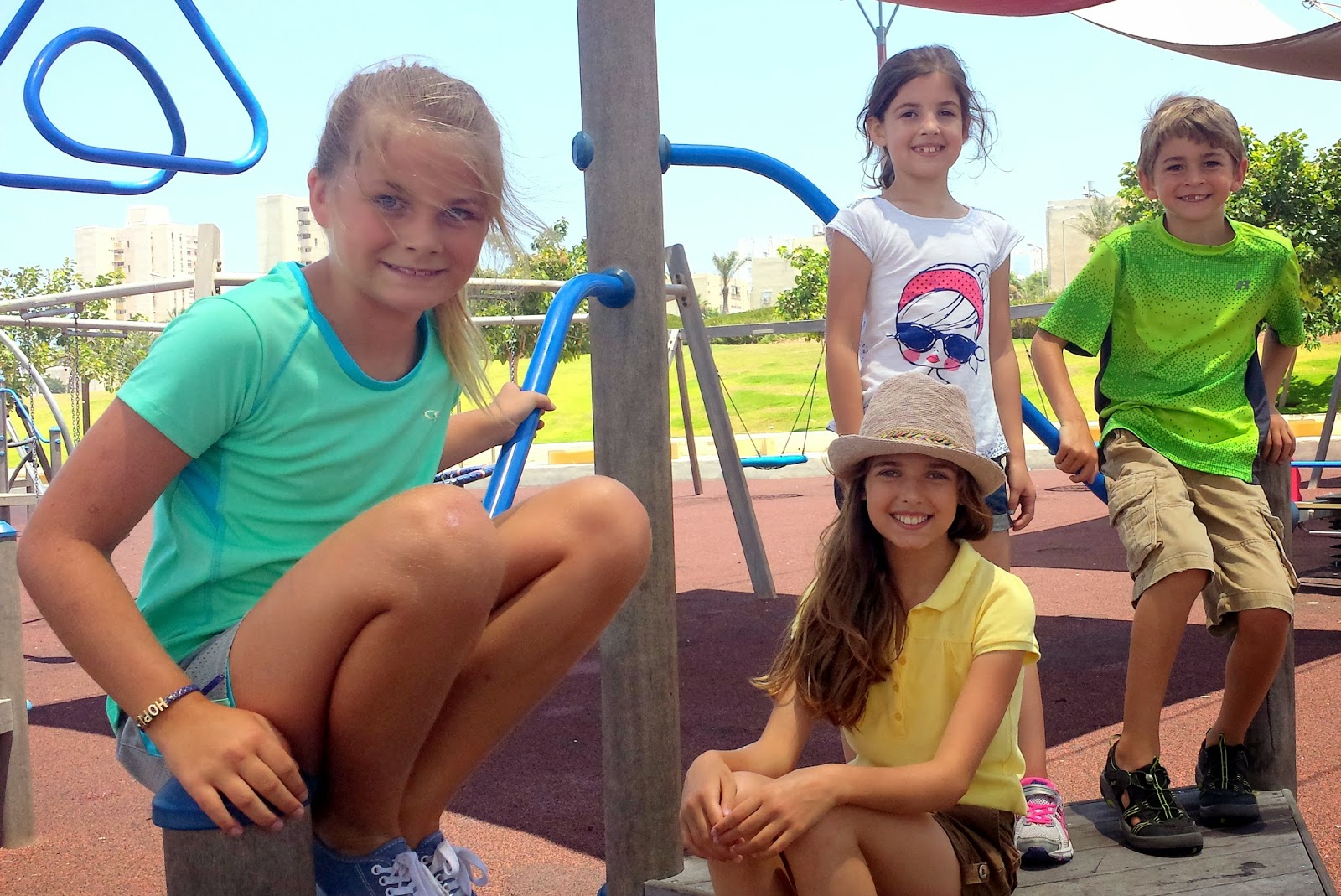 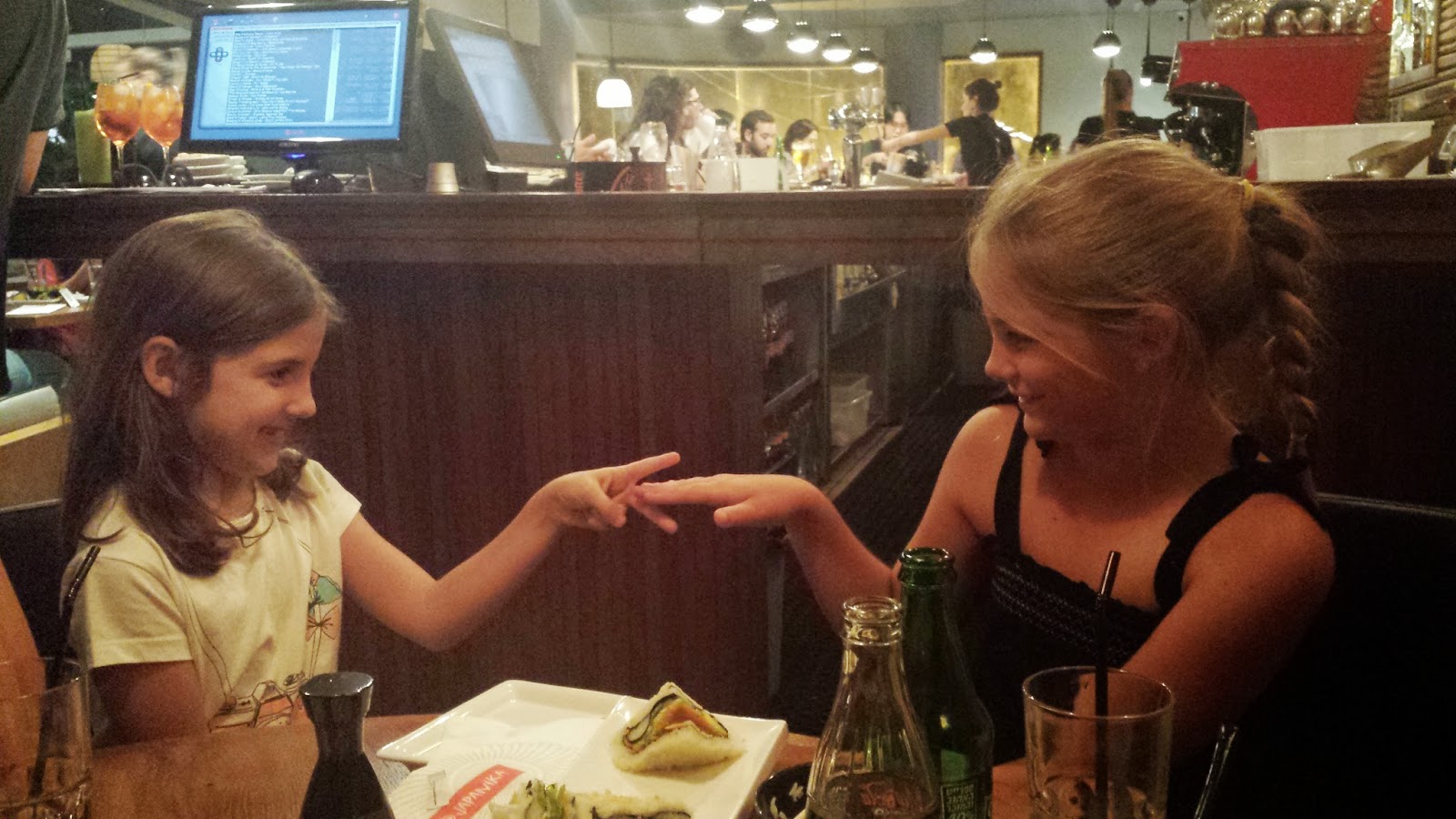 Next we went to a newer park, only three weeks old, with a giant climbing ropes and if we got up there were the same circle rope swings but hanging a lot higher. Also a vase looking thing that you spun in.  They definitely have the best playgrounds we have seen in all of our travels, even better than San Francisco's. 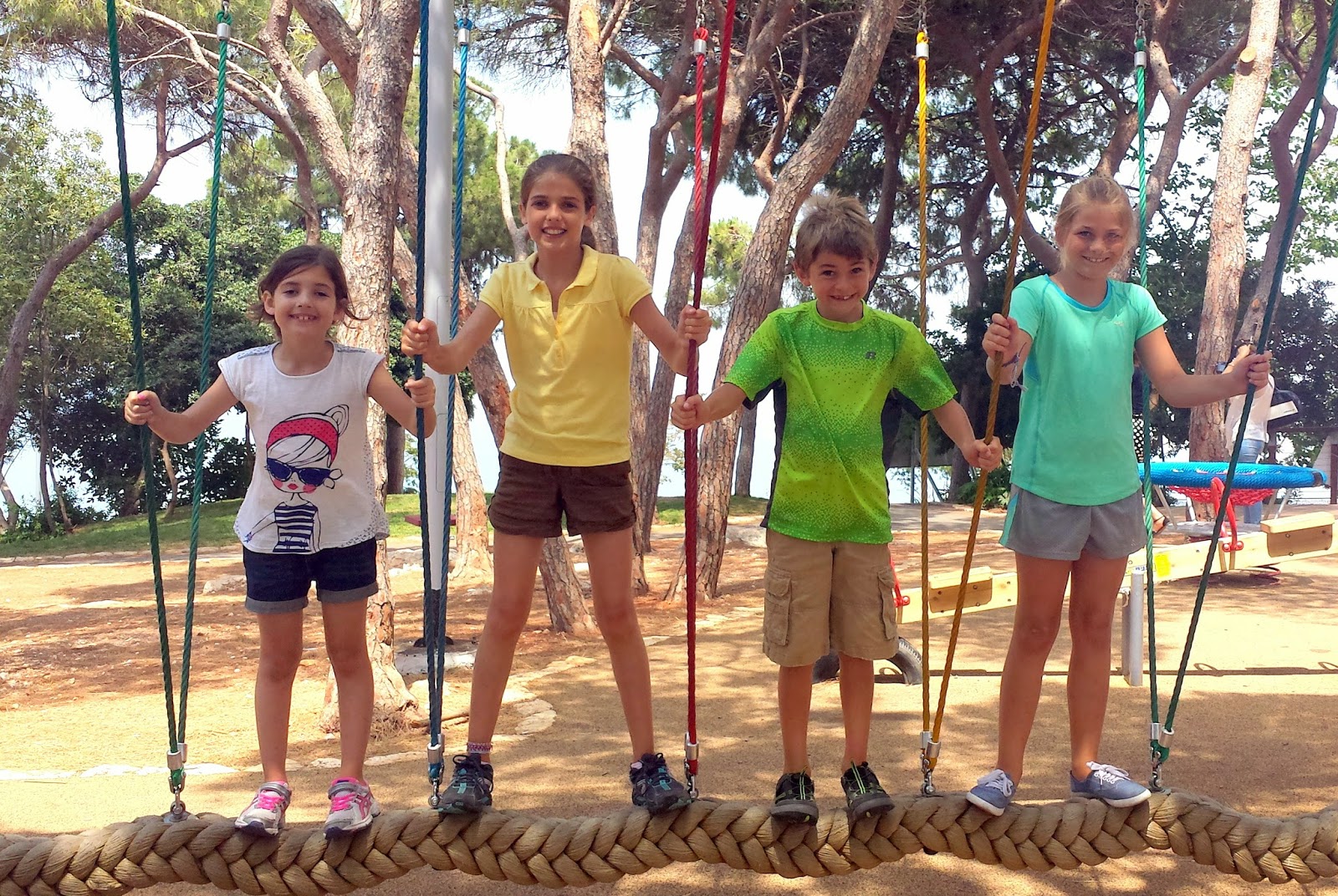 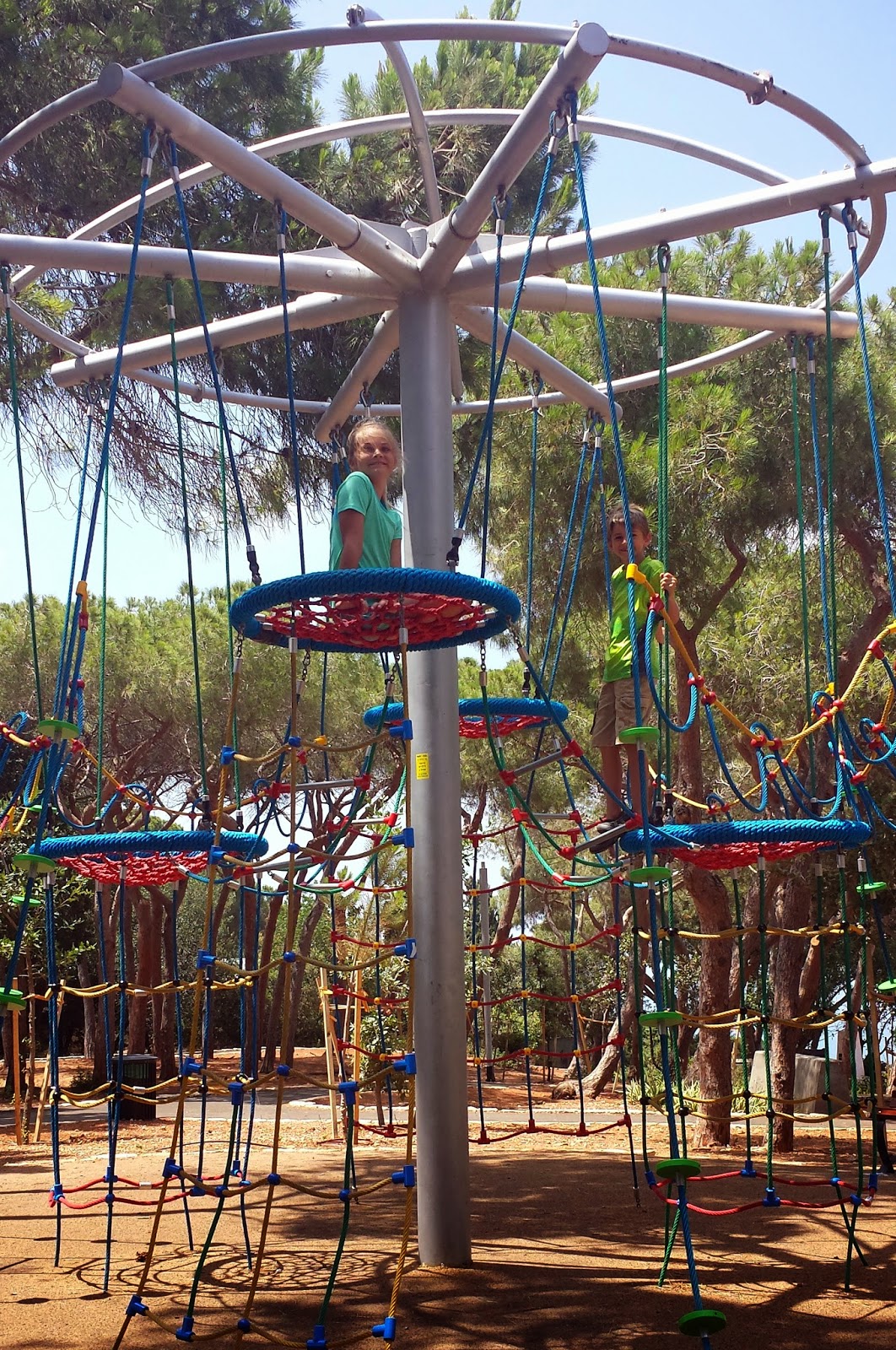 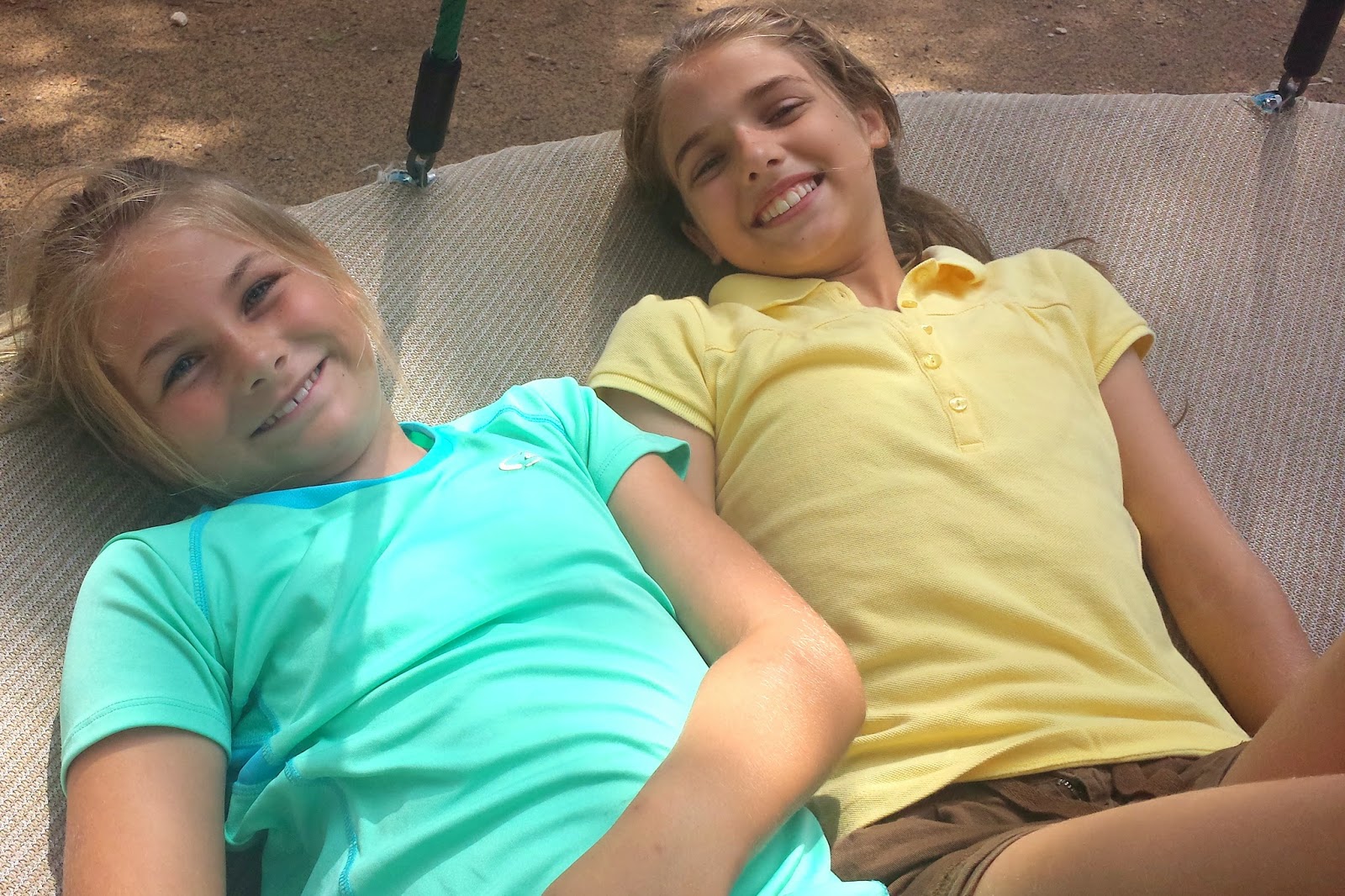 On the way to the car we stopped to look at The Bahai. This place is on the World Heritage list. To be on the list you must meet one of the ten criteria set by the United Nations Educational, Scientific, Cultural Organization.  There is a rumor that under the gardens is an entire city. Their Mother talked the guards into letting us in for a quick peak without a ticket...we had to promise only whispering, no gum, only water, no running, or climbing on anything.  Their Mom called them the "hanging gardens" because the gardens cover nineteen terraces going all the way up the northern slope of Mount Carmel.  In the middle is a golden dome where the prophet of the Bahai faith is buried. 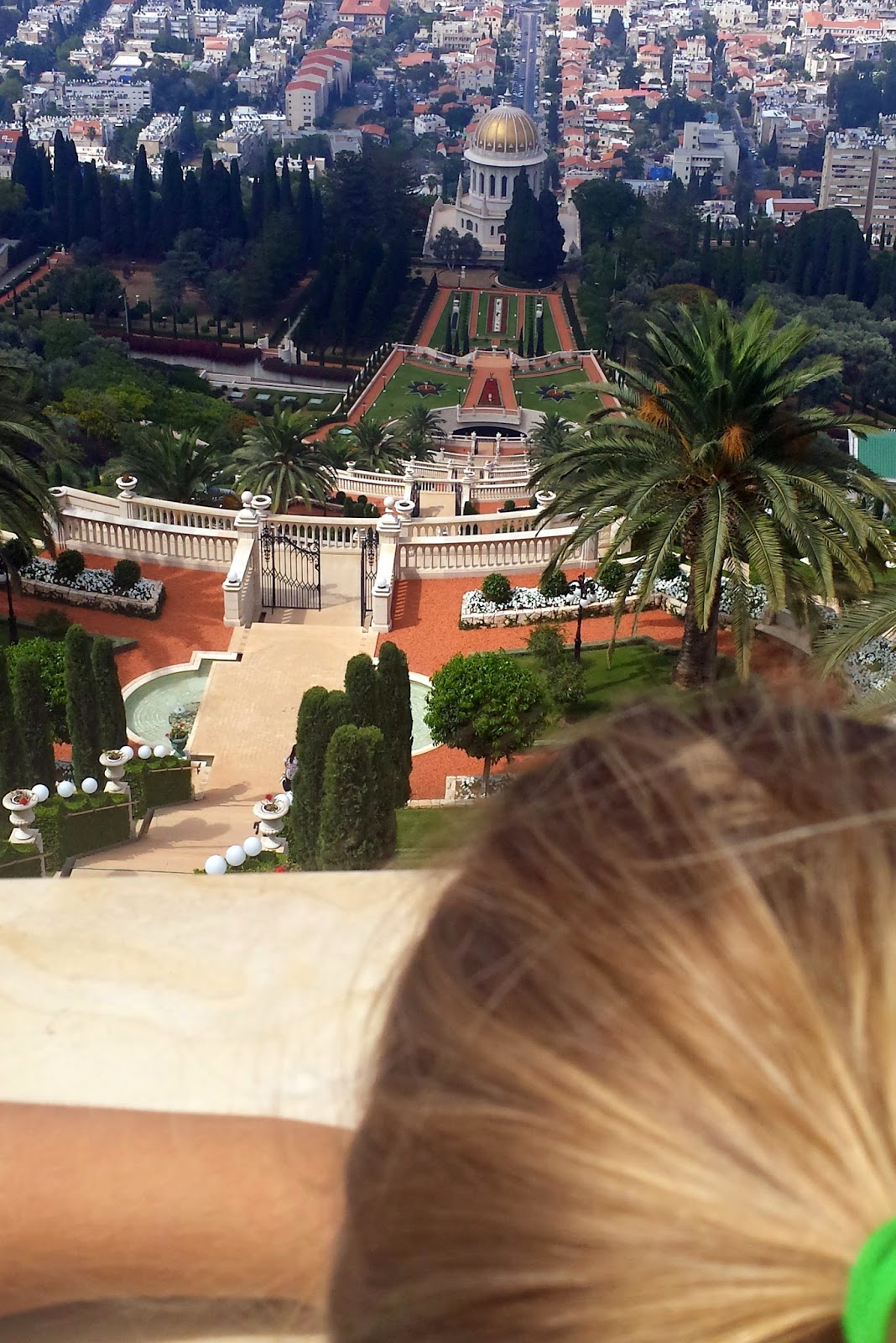 Next year is Maya's Bat Mitzvah (Ba-Mit-sva). It is a Jewish tradition that when a girl turns 12 she becomes Bat Mitsvah and get the rights of an adult. Normally there is a religious ceremony, a party, and a significant gift. Maya's wish for her gift is to come visit California.

I sure hope she gets her wish and we see them again and are very thankful for their kindness.
Posted by A. Jolly at 5:37 AM

Looks like such fun!! I am sharing your posts each day with my walking friends. They are so impressed with your writing and adventures!! Stay safe and have a good trip to France. Love, Grandma

Ali i'm so glad u had such a great experience. Safe travels jome. Hi from ohio

What a wonderful summer you are having. I hope Maya gets her wish too:)

Miss You, school, and everything else. Thanks for your help on the essay.
~Ally~

Hello Cousin Ann, Thanks for your note. We hope to visit Ohio next summer. ~Ally~

I am sorry I have not been able to write much. I have been busy training for Nationals. I competed this past weekend and got Bronze! I am now ranked 3rd in the nation! I am so excited and can't wait for you to come back home so I can show you my medal!

Astarra misses you too. She said "Sweet" about the picture of you and the python from the last post. She also really likes the park with the circle rope swings.

I'm glad your having some great adventures and making new friends. We look forward to hearing about your adventures in France. Enjoy, Monique & Astarra

One of the places I visited that I remember the best is the Baha'i Gardens! Beautiful! Glad you are having fun and you have a friend, Maya! I will have to find out if your friend Maya is the same Maya that my friend and hair stylist Angela is friends with!
Hugs to Alec!!
Be safe and enjoy!
Ms. Singer

Dear Brandon,
So Happy For You! I have to watch on of the matches. Cant wait to see you.
~Ally~
PS BOO RAVENS GO STEELERS!

Dear Ms Monique,
Miss you and Astarra so much!
~Ally~

Dear Ms Singer,
I miss you and school so much!
~Ally~