At the end of Gabbianuzzo Mom and Dad went out to dinner with their friends to Osteria alla Piazza. Alec and I stayed at home with our new Aunties, Suzanne from Paris (originally from the US, has lived in France for 14 years) and Jo from London (originally from Cypress).  We ordered take out which in Italy is called "take away"...more pizza and more gelato.

On our last day we woke up, had breakfast, and painted just outside the dining room.  We made caterpillars out of egg cartons with grasses for antennas and fairy houses out of recycled boxes from the kitchen. 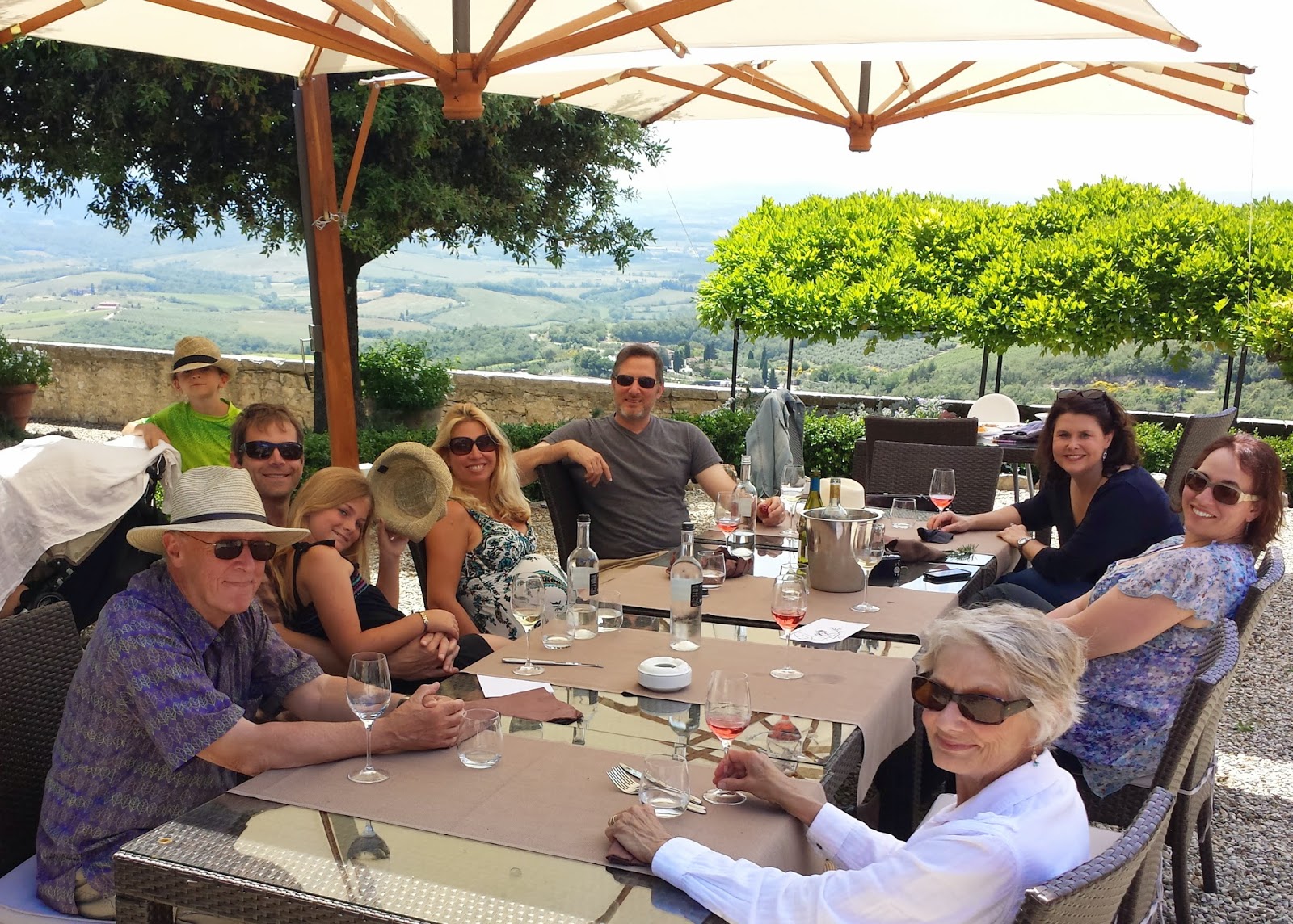 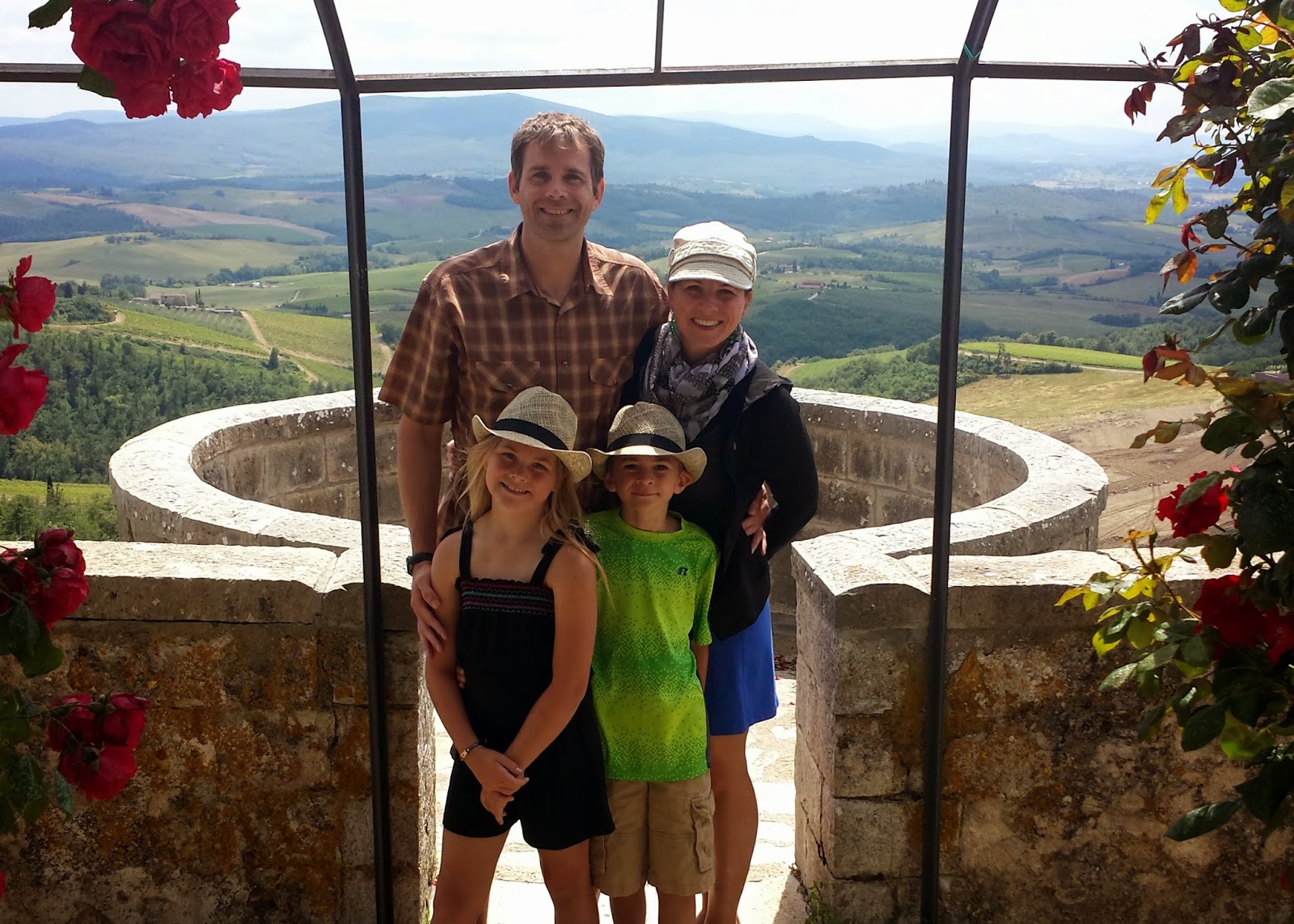 Then we went a short drive to a hotel/winery/restaurant, Castello La Leccia.  There were mazes we could play in until the staff asked us to stop.  Also beautiful views.  We played hide and seek with our friend, Georgia.  After a lunch of breads, cheeses, melon, and salami for Alec we drove back into town for some shopping and more gelato.  We got to go in the grocery, Coop, where I got to help weigh the fruits (fruta) and vegetables (verdura) using a scale and a computer screen and it would print out a sticker with the cost and weight.

After dinner and sleep we got up early to pack, said goodbye to our friends, and drove to Florence.  We think we get to see them next year.  They are moving from London to St. John's after Christmas and invited us to visit. 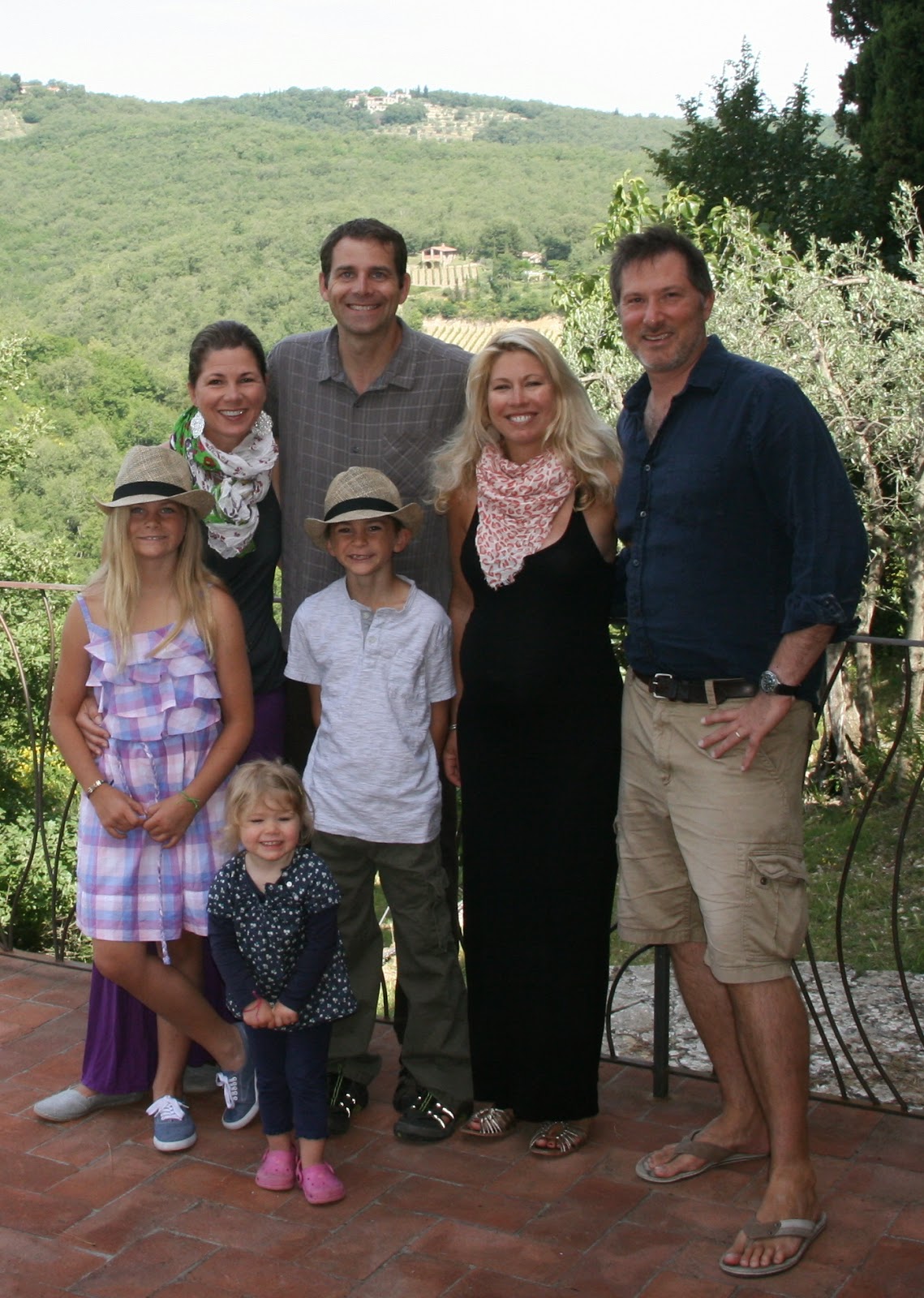 After a 40 minute drive we arrived in Florence.  Wow, parking is tough.  The entire city center is a Z(ona)T(raffico)L(imitato) which means only drive with a permit and tickets for breaking the rule are VERY expensive.  We spent about 20 minutes trying to find parking and then had to walk 15 minutes to find our bed and breakfast.  We passed it once, but found it just before we lost Alec.  We buzzed in and were met by Adrianna, the owner of Piazza Del Carmine B & B.  Wow! We have our own apartment with 2 bedrooms, two bathrooms, kitchen, dining room, and pretty (FRAGILE) antiques.  Alec and I had peanut butter and jelly sandwiches on the terrace before we went to town. 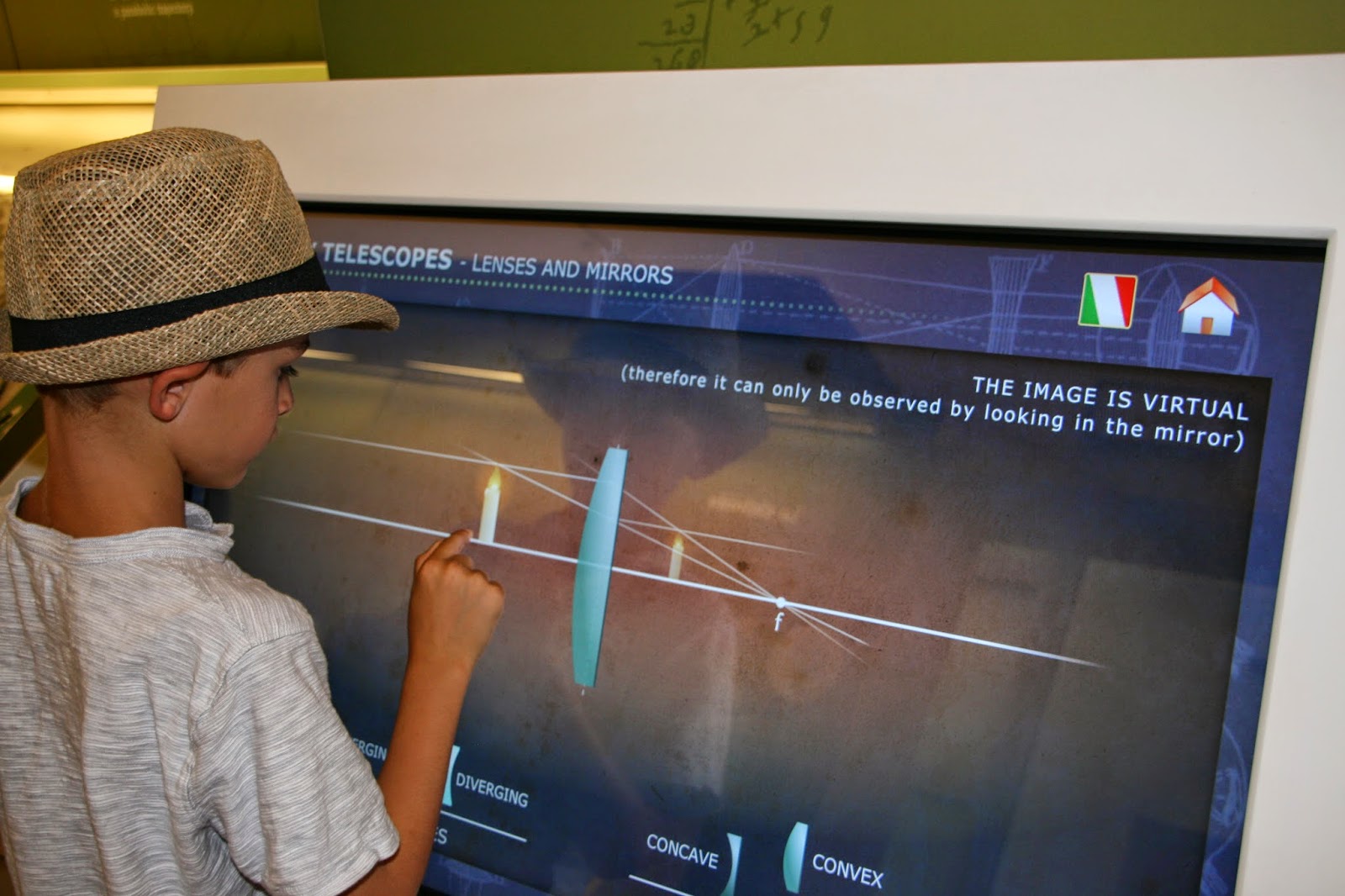 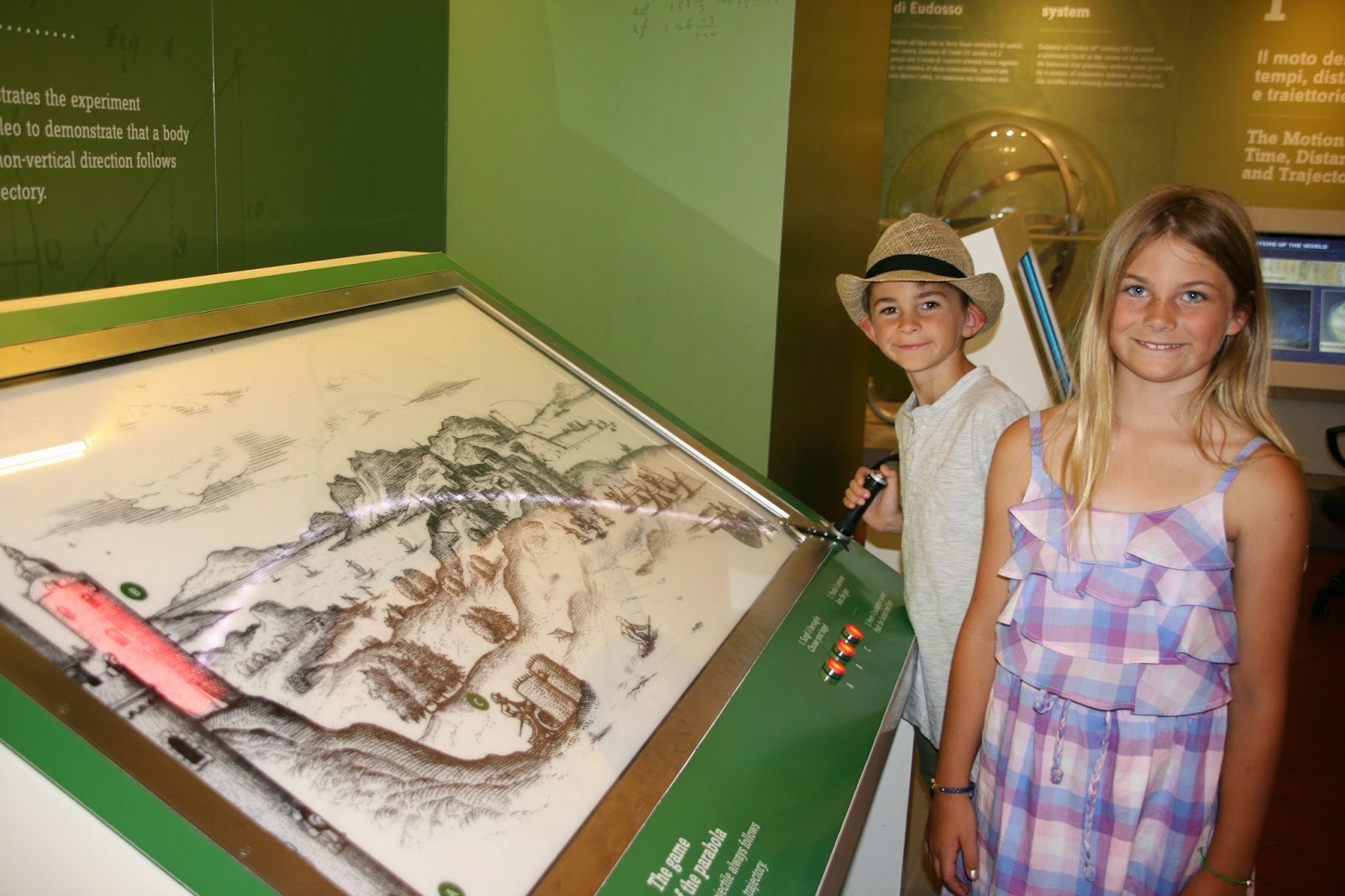 Since we will be seeing lots of art Mom and Dad decided to take us to the Galileo Museum. Some stuff was neat, some boring and we just looked for a couch to sit on while Mom and Dad looked around. But at the end there were two rooms where we could have hands-on with some of the theories and inventions.  For good behavior in the museum...more gelato and then we walked through the walkway by the Uffizi Gallery.  Mom and Dad said we will not go because they said the Louvre in Paris will be our one major art gallery to go through.  But outside the Uffizi in the piazza we saw many of the statues that were inside that were really cool.  And since I've been reading Percy Jackson I liked Perseus cutting off the head of Medusa, Hercules battling a centaur, and the King Tritan (Neptune) fountain. Then we walked across the Ponte (Bridge) Vecchio the oldest bridge in Florence which used to have the butchers, fish mongers, etc of Florence because they could just toss scraps into the river below...now it is lined with jewelers.  I wish my ears were pierced. 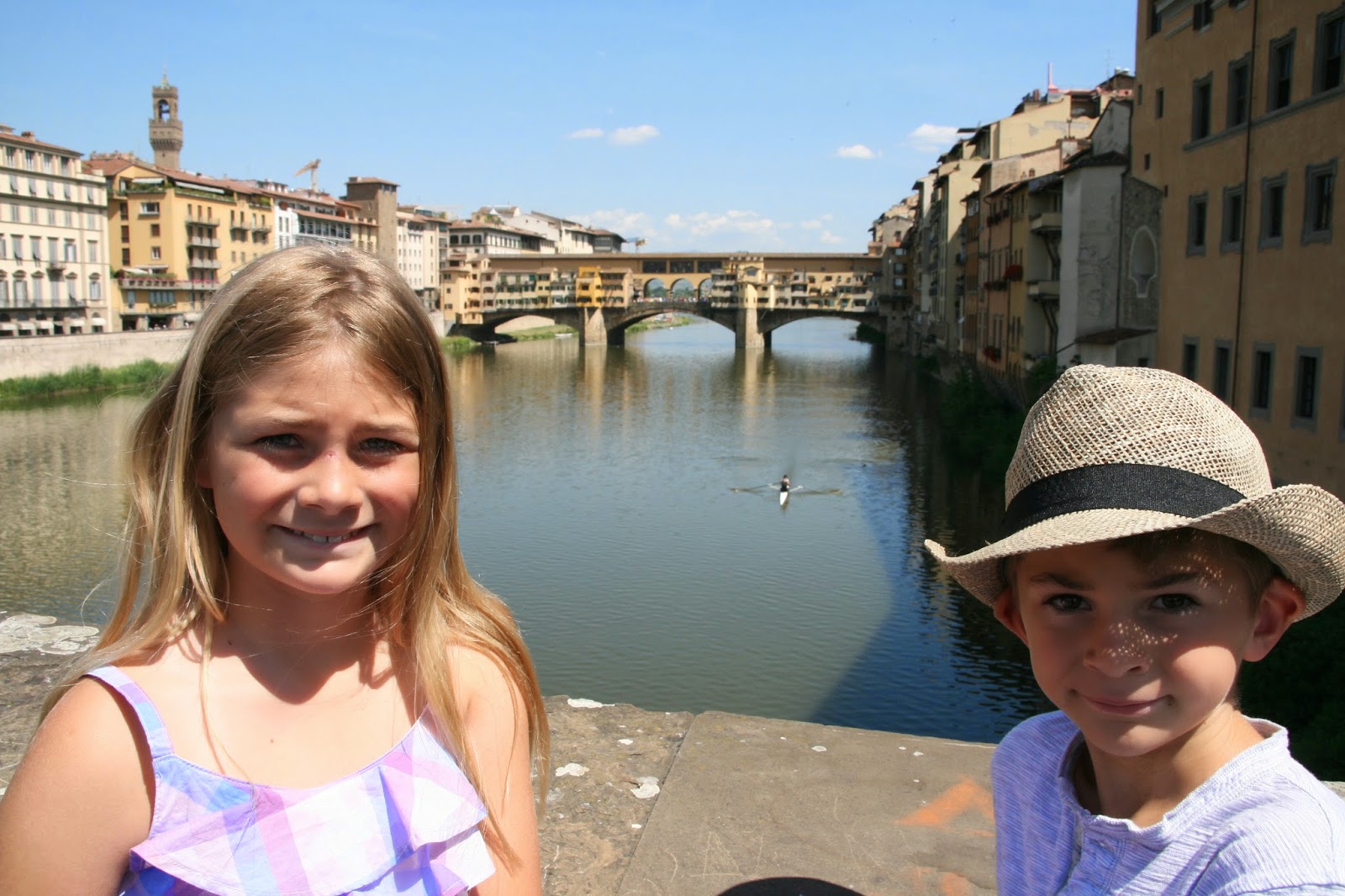 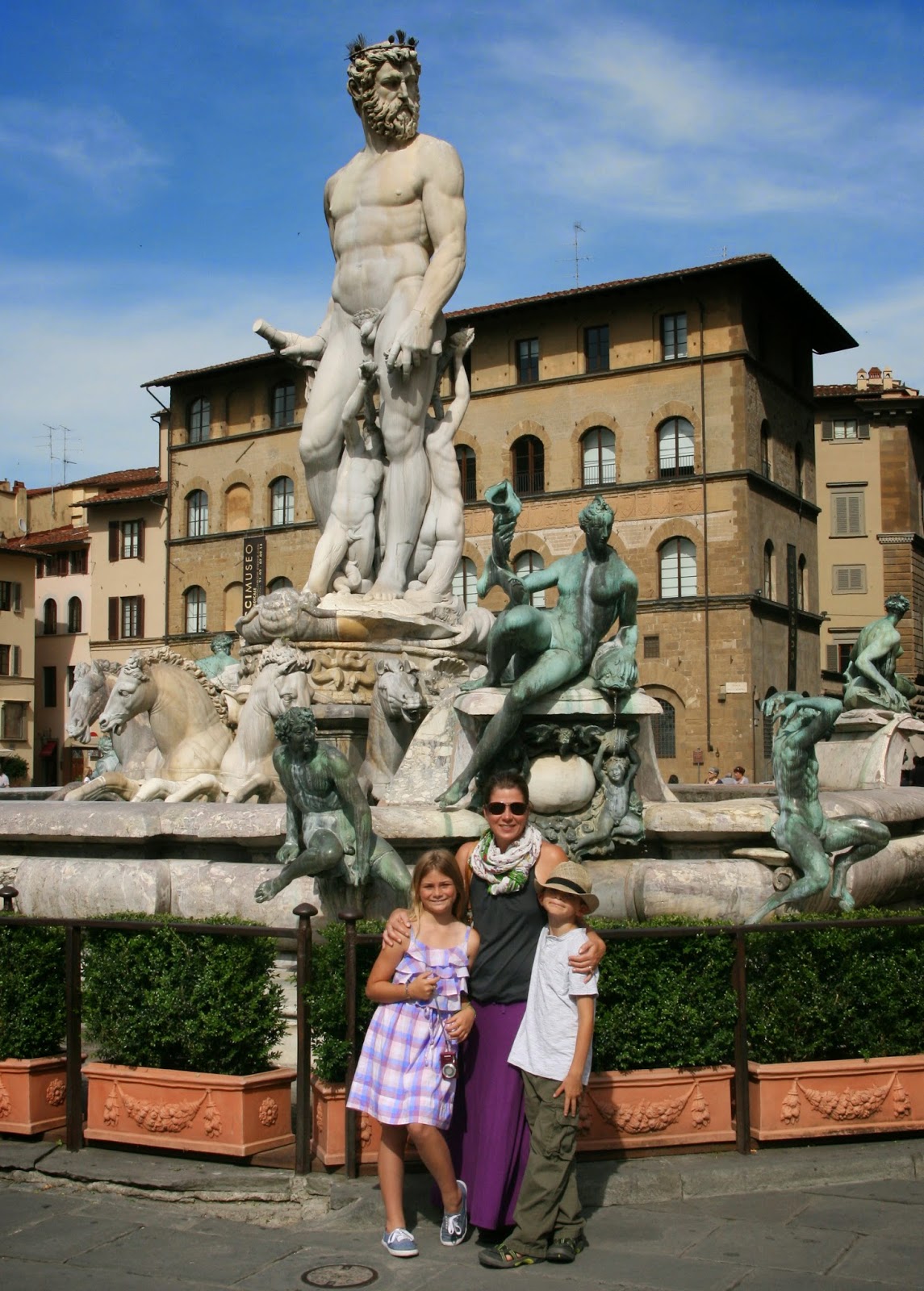 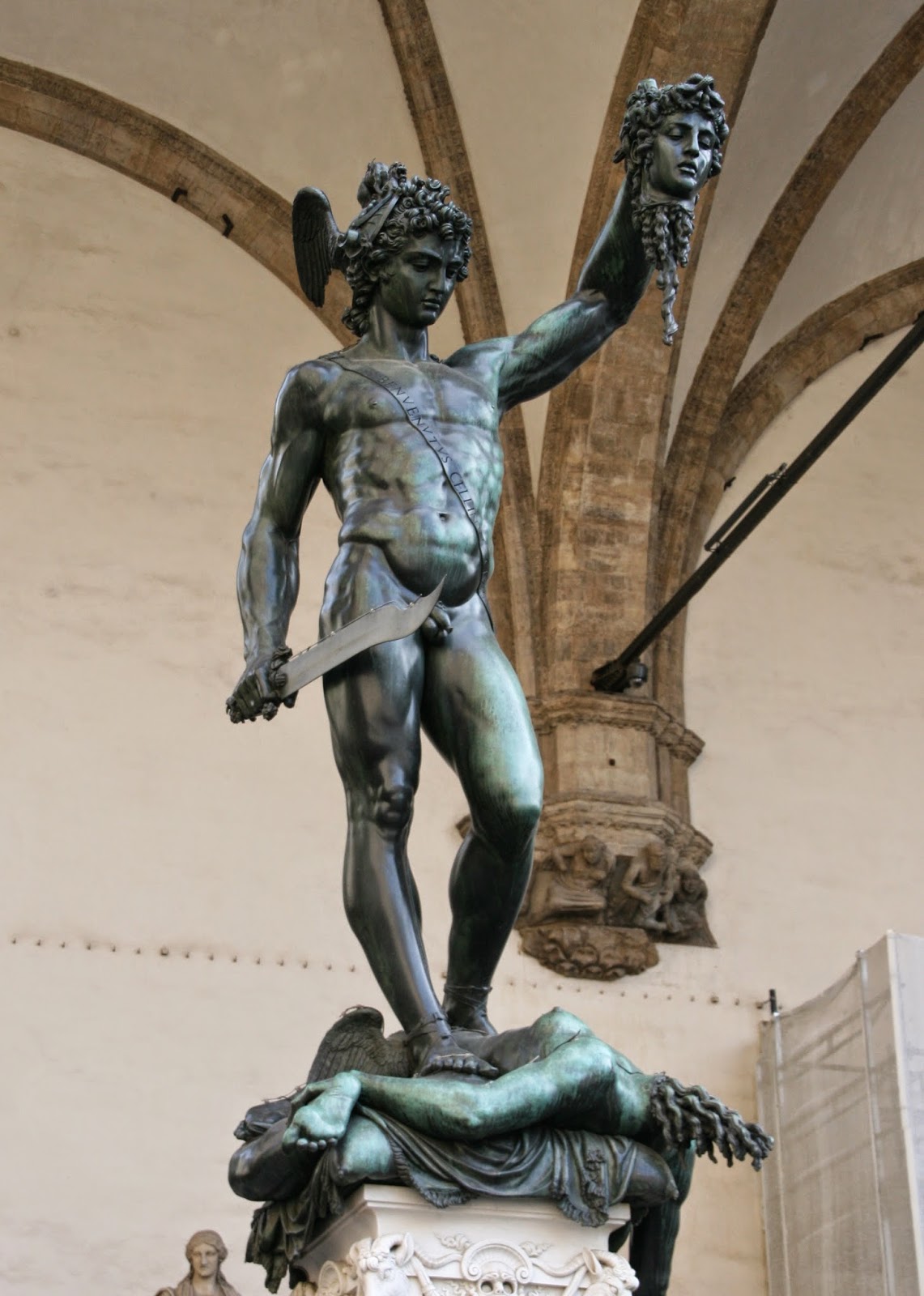 An early dinner, which is 7, in Italy, right across the piazza we are staying in at Trattoria Napoleon. They had french fries, but we decided not to order them.  We tried a carrot soup and I actually found a new vegetable I like...cucumbers I tried from my Mom's salad.  Then to bed because tomorrow we get to see all the big sights and tomorrow evening take a pizza and gelato making class.
Posted by A. Jolly at 1:09 PM

Great writing and enjoy all the history you are seeing. Wish we were there with you!!! Love, Grandma

That sounds so awesome I wish I could be there it sounds like a lot of fun. I got back from my trip on June 6th. On my trip I did a lot of really fun things. The first thing I did is that I went to a lagoon that was right on hotel grounds and a beach right outside our hotel and super close to each other so I could go back and forth. Then on the 2nd and 3rd day I caught fish at the lagoon I even caught 1 medium-sized fish. Oh ya did I tell you we had to go shopping, every food was different at sams club. On the fourth day we went to my brothers golf tournament (he came in 1st place) and when I was walking on the side of the lake on the golf course a mommy duck attacked me because she was protecting her babies I saw the baby ducks. The day after that I went to sea life saw dolphins preform, turtles swimming, sea lions dancing singing and playing acts in movies and my favorite part was when i fed the birds, they land right on your hand. On Wednesday I went jet skiing and parasailing that was so fun. Parasailing was more fun. When I got off the boat I saw sumo wrestlers from Japan. I took pictures with them. I looked like a scooby snack to them. I will have to show you the pictures when you get back.
On the last day I road waves on the ocean on my boogie board. I had sooo much fun!

Brandon, Sounds like your trip was a lot of fun. Please tell your brother congratulations. Alec wants ti know if you really saw turtles. I can not wait to see your pictures, especially the ones of the sumo wrestlers (Alec) and the sea life (Ally). We will get together and share pictured when I get home.

Grandma, We wish you were here too. We had so much fun yesterday making pizza and gelato. We saw Grandparents traveling with grandkids last night from Evansville, Indiana. Maybe we come back here with you. Love, Ally & Alec

I did see turtles and sumo wrestlers.
I got to see turtles at turtle bay. They were swimming in and out of the ocean. A few of them even decided to sun bathe on the beach. They are protected animals so we were not allowed to touch them or get very close to them. The sumo wrestlers were enormous and the ones I saw were juniors, just wait till you see the pictures.