Masada and The Lowest Place on Earth

Yesterday we woke up, packed up, and ate breakfast.  They had the normal stuff like cereal, yogurt, and pastries.  But they also had salads, fish, cheeses, and meat.  All items would have been prepared in advance because it was Shabbat, so no pancakes, waffles, or scrambled eggs.  Next we sent the boys to get our rental car. We met up with Lily's family and caravan-ed to a place hot and dry.

Can you guess? Judaean Desert.
After about 30 minutes and several check points, as we were driving through the West Bank, we came to a sign that said "Sea Level." 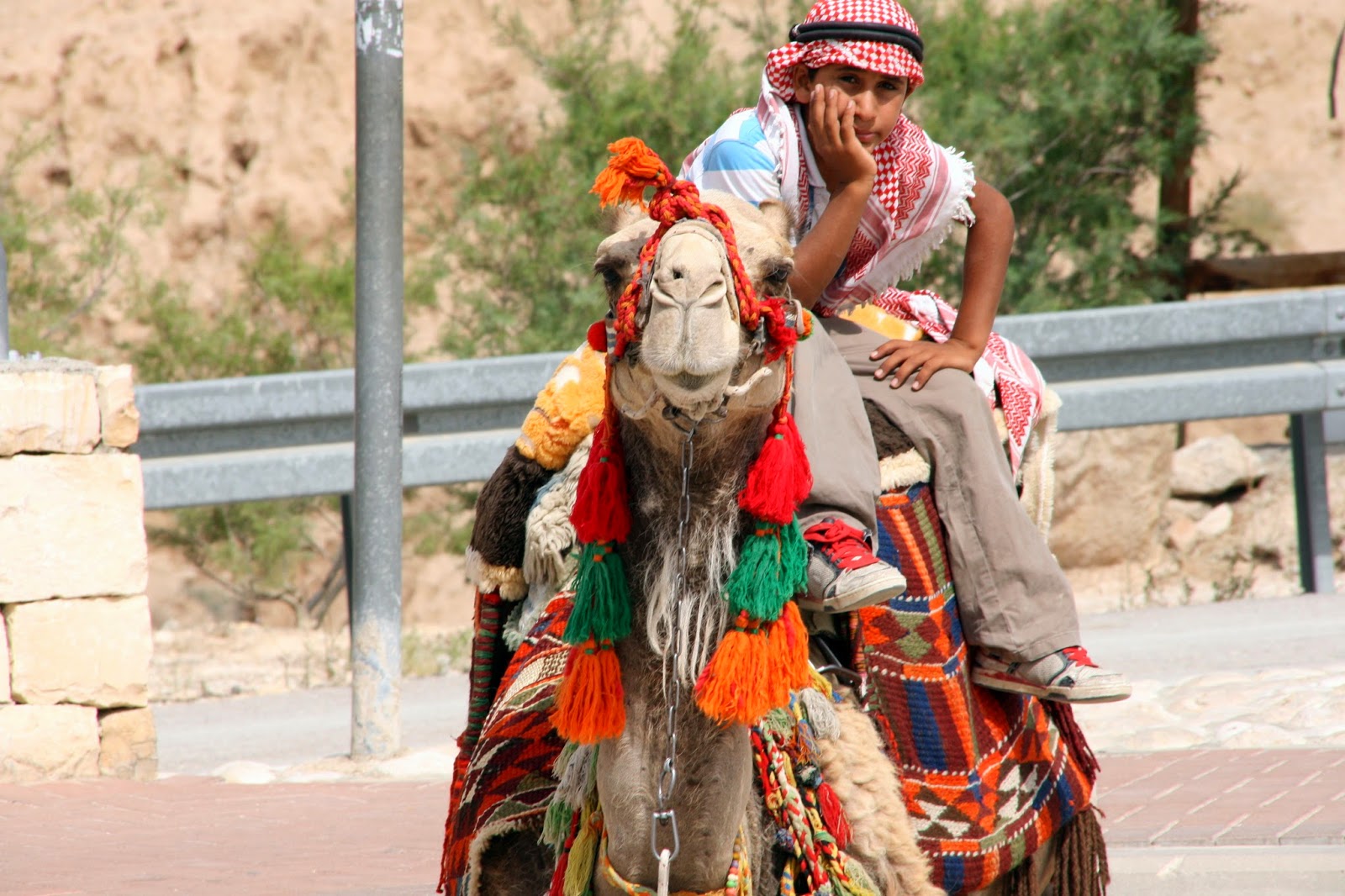 On the other side was a camel. Wait, what is a CAMEL doing here?! I begged Mom and Dad to let us take a picture with it. When we got out we motioned to Lily's family. Soon we were all out staring in awe. A man tapped Dad's shoulder. "40 shekels for a ride", he said gruffly. I begged dad to let me ride. He said yes. 40 shekels is about $11 US Dollars.  I hopped on the camel's saddle. Alec got on too.  The man's son who was probably my age led the camel around.  We posed with the camel and rode in a circle. After we were done I peeked at some of the souvenirs we could buy. I saw a charming piece of wood that was carved into a camel. We bought it and one other thing. 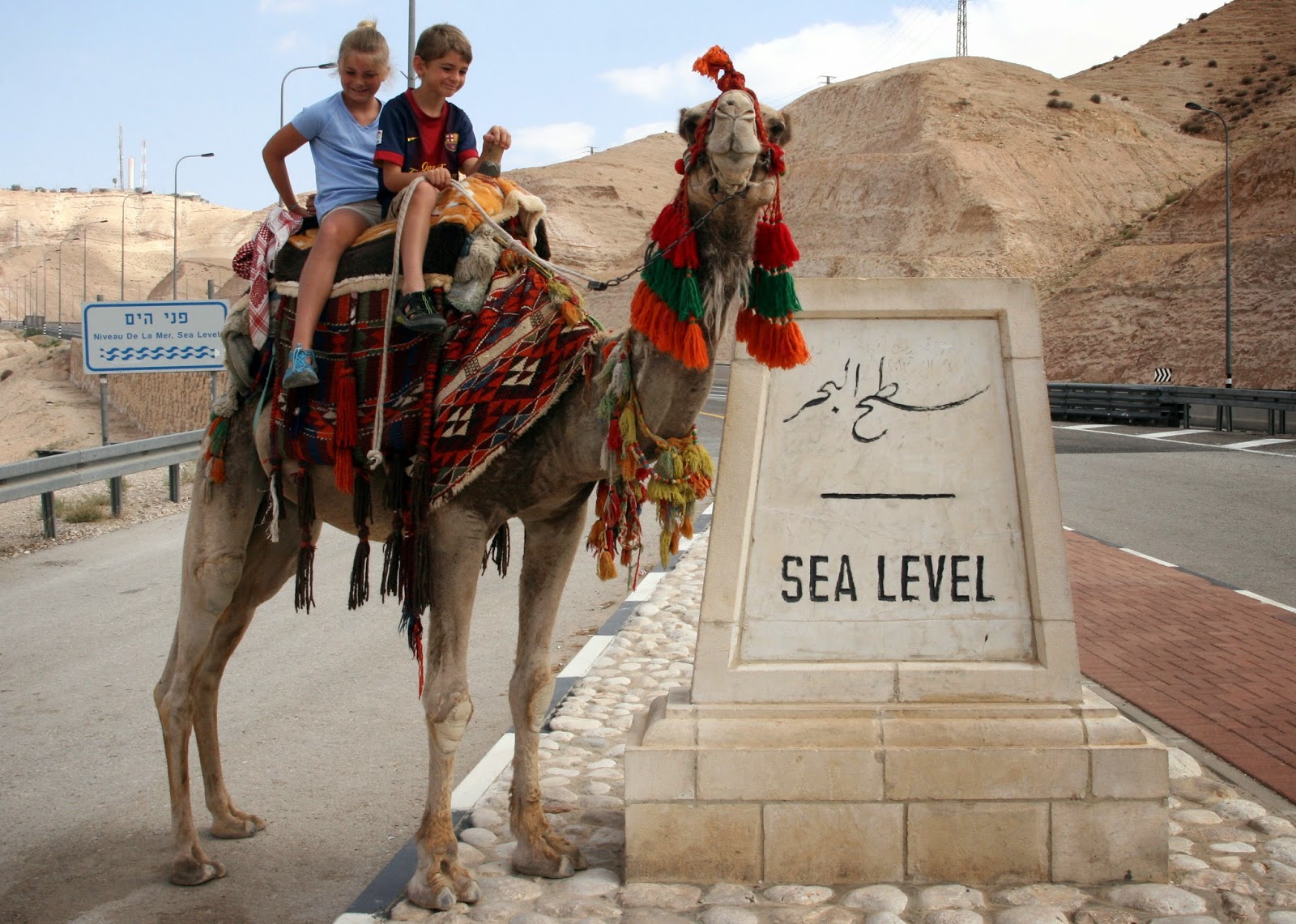 We got back on the road and 40 minutes later we arrived at  Masada, where there was a building that had a tram that led way up to a huge cliff. Did you know why it was so famous?  Originally it was built by King Herod and had several palaces, two giant bath houses, store rooms for grains, wine, fish, etc..  Later when the Romans attacked Jerusalem many fled to this mountain top for safety.  They held out for quite a while eating things they found in the stores from King Herod's time and using the water that still flowed into the cisterns.  But the Romans would follow and built strong catapults that launched heavy boulders.  They also built a ramp and tried to burn the gates. When the Jews realized they would not win they had a meeting. They decided to kill their wives, children, and even themselves rather than become slaves of the Romans. 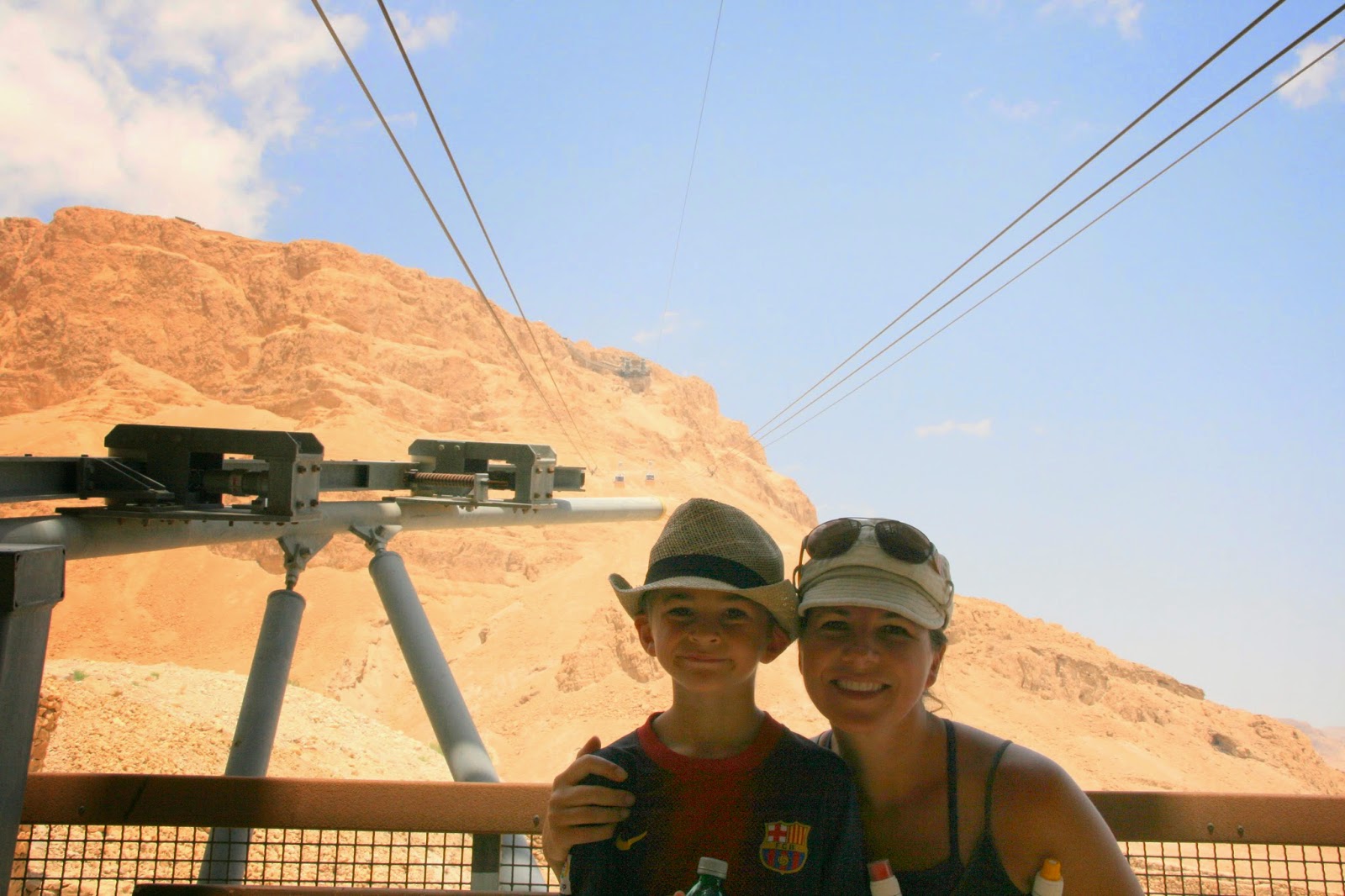 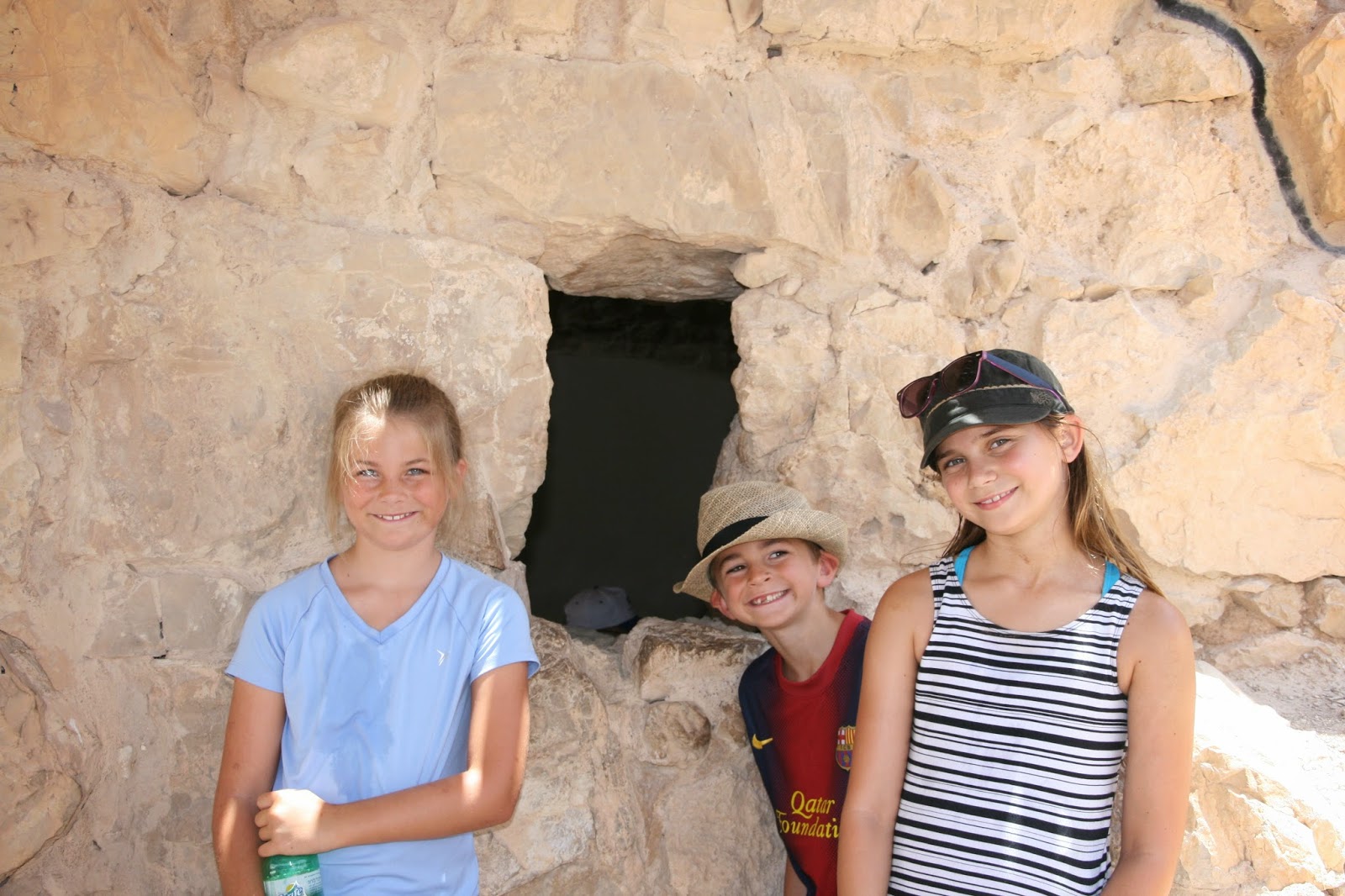 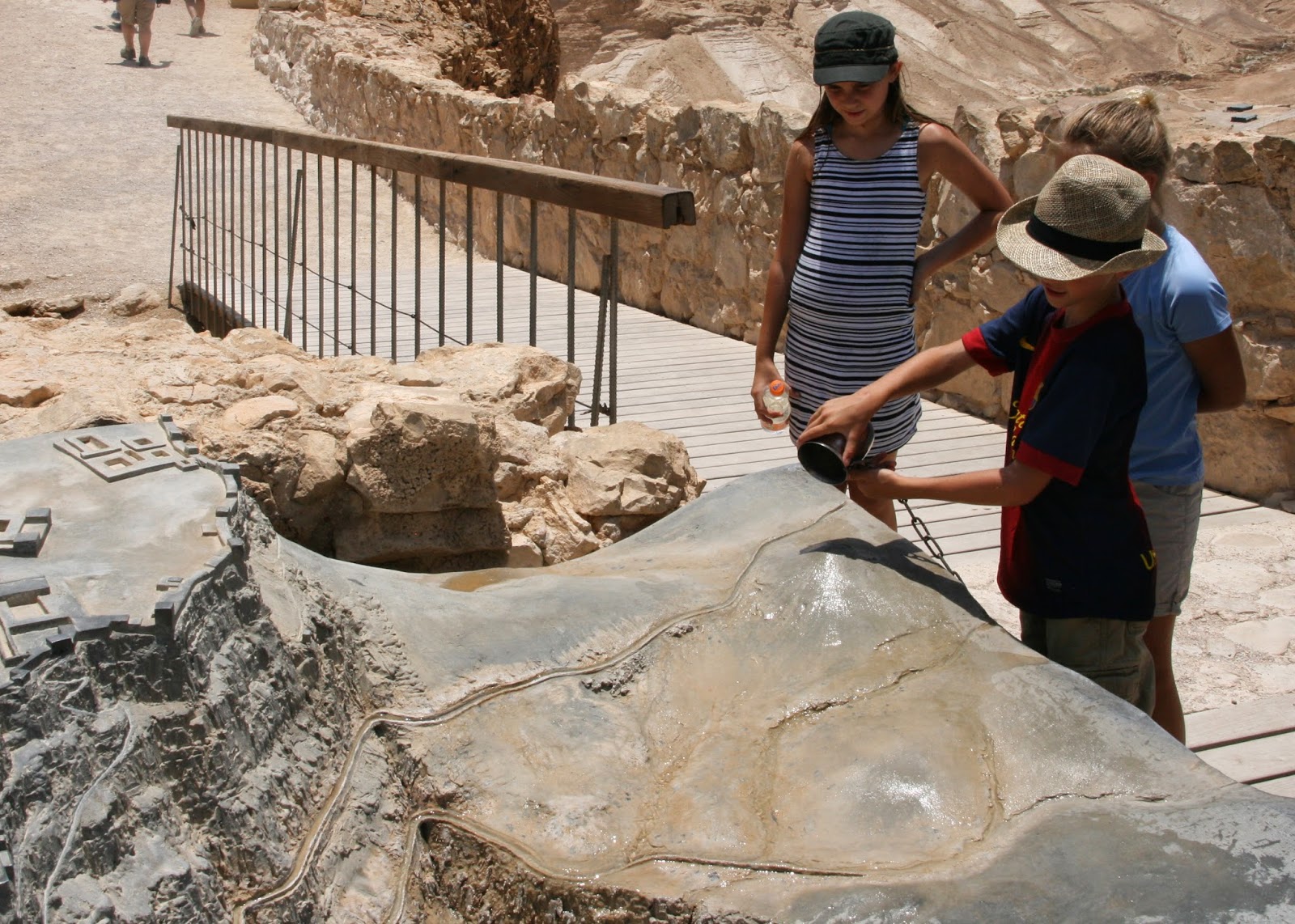 After a quick lunch at the bottom of the tram we were off, but not before an ibex came by to say hi, right there on the deck with everyone eating. 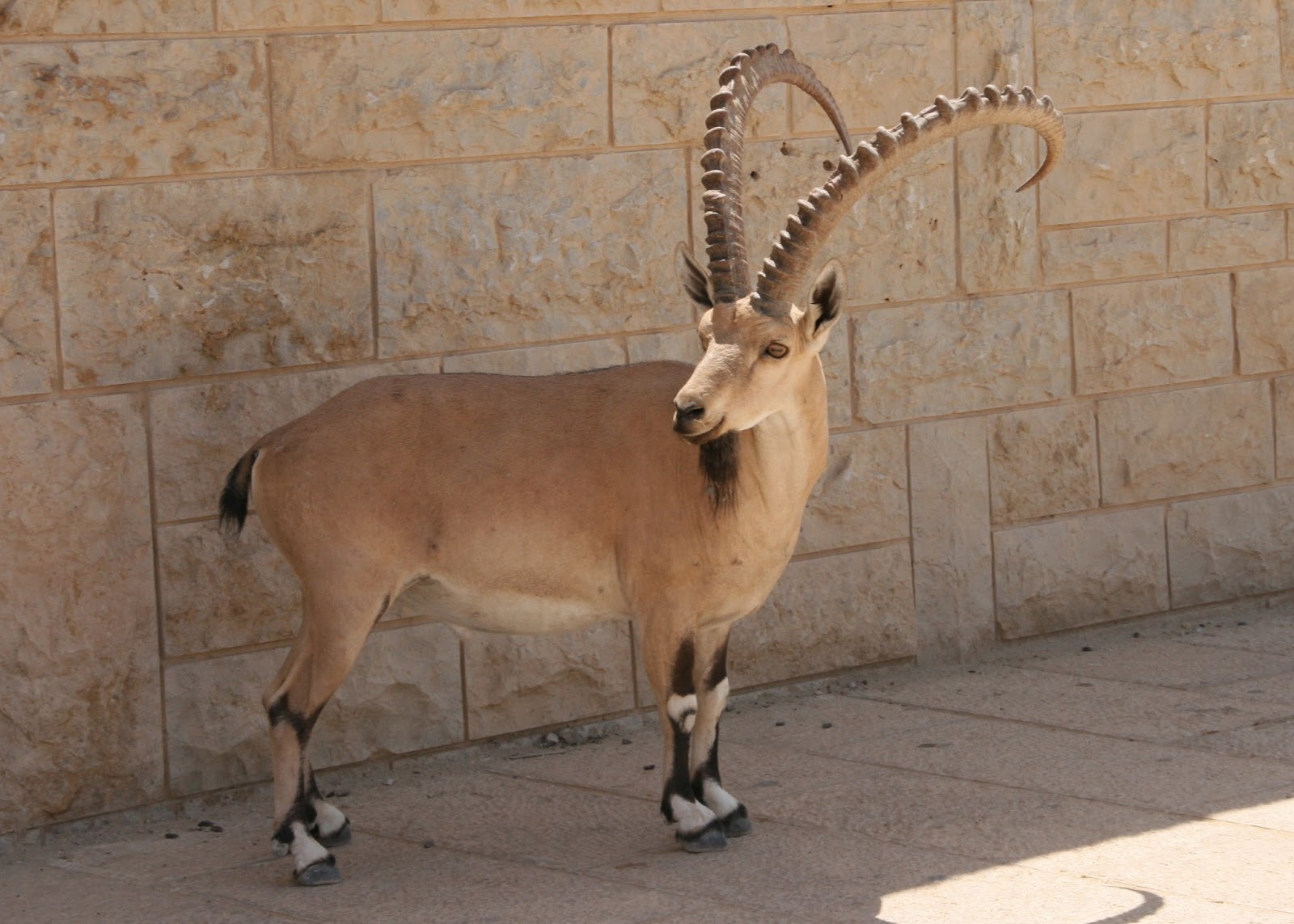 Next we went to the DEAD SEA, actually the Mineral Beach at the Dead Sea  The Dead Sea is the lowest place on Earth at 1401ft below sea level. There we floated in the salt water.  Yes, we floated because a normal ocean is only 4-6% salt, but this is over 34%.  So we not only floated but had to make sure we did not get a drop of water in our eyes.  And this is also why nothing can live in it.  Then we covered ourselves in mud from the Sea. Why with mud you ask? Well, some say that the mud is good for your skin.  In fact King Herod who built Masada above used it as the world's first ever health spa. 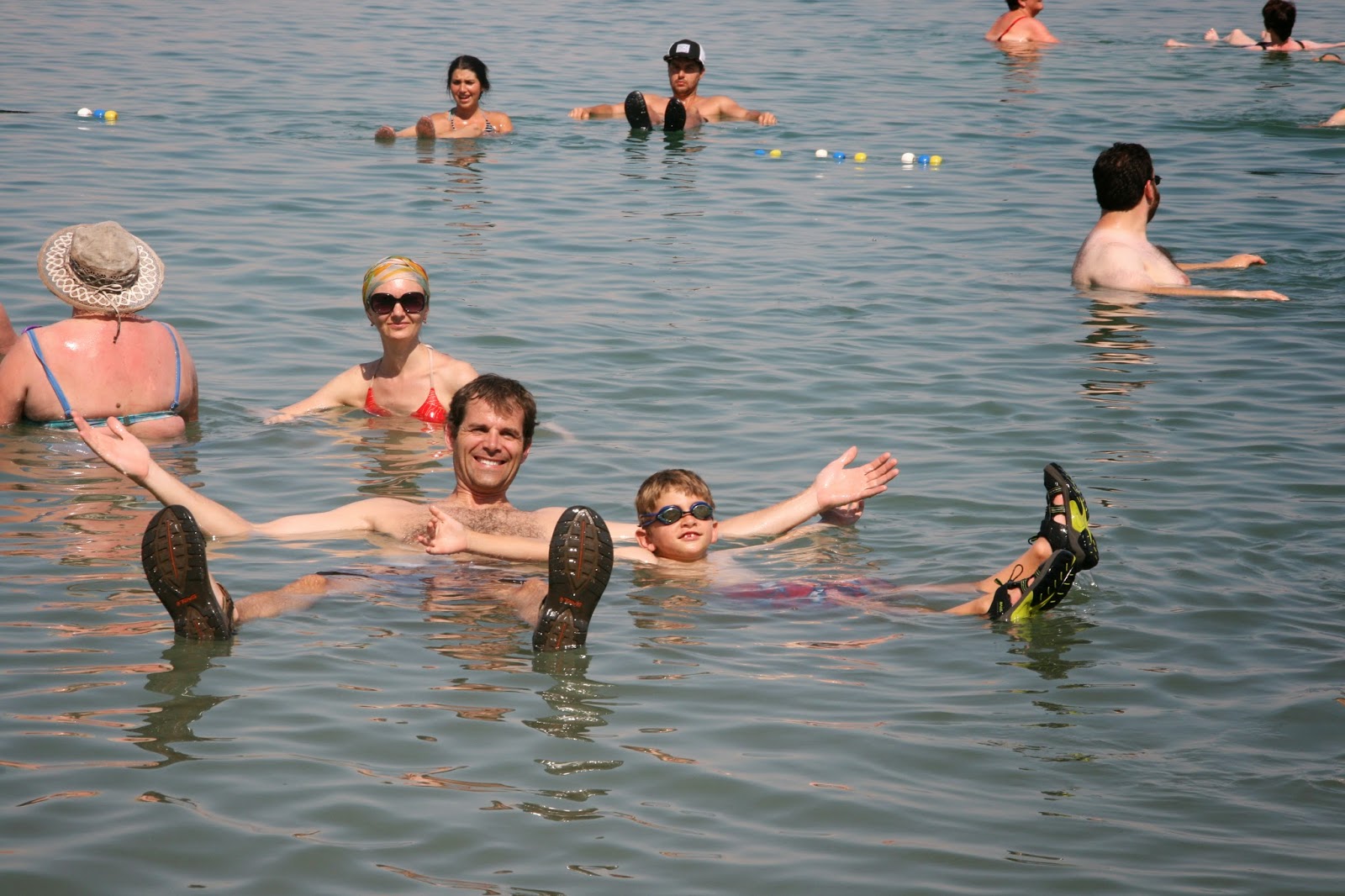 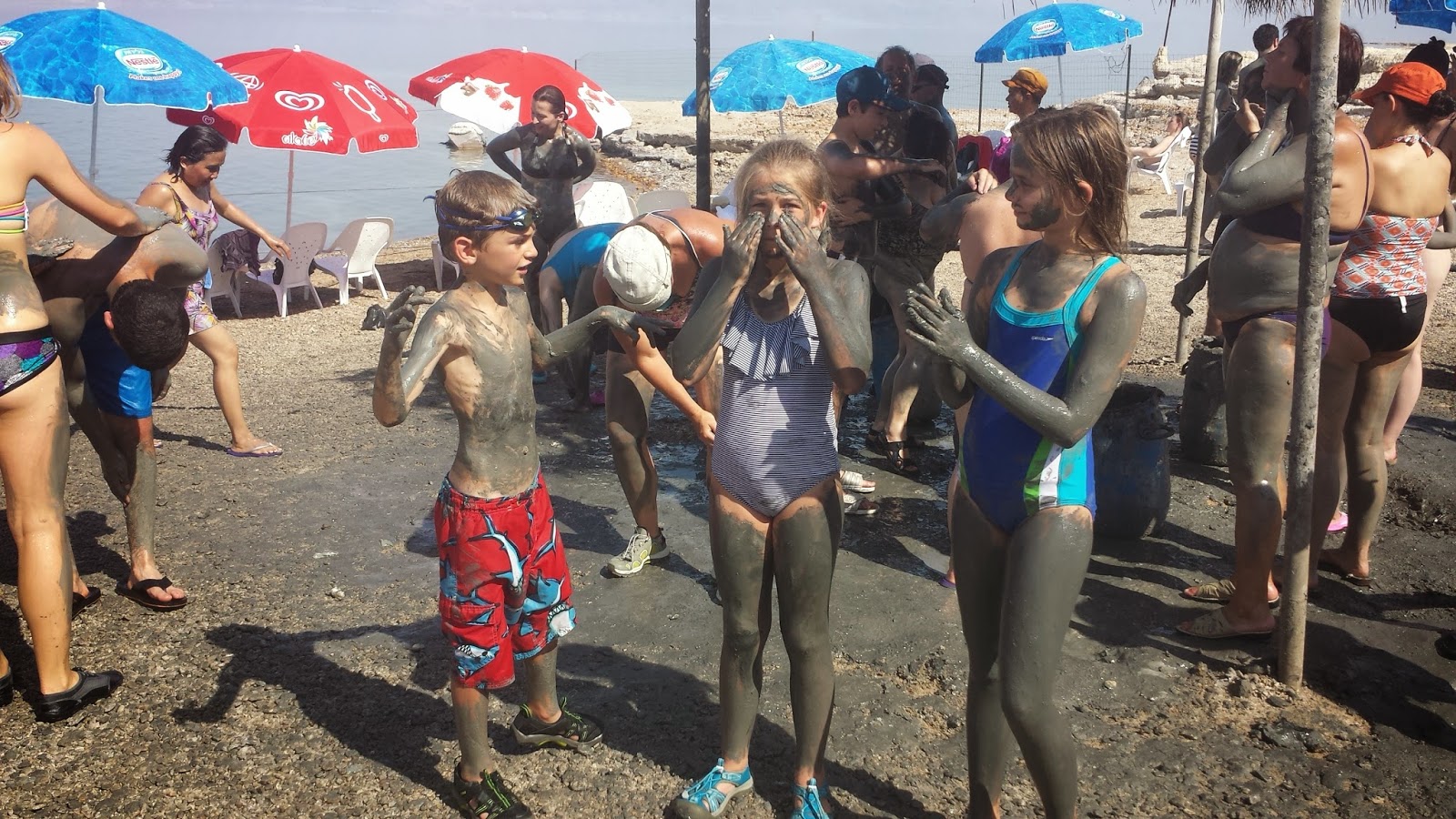 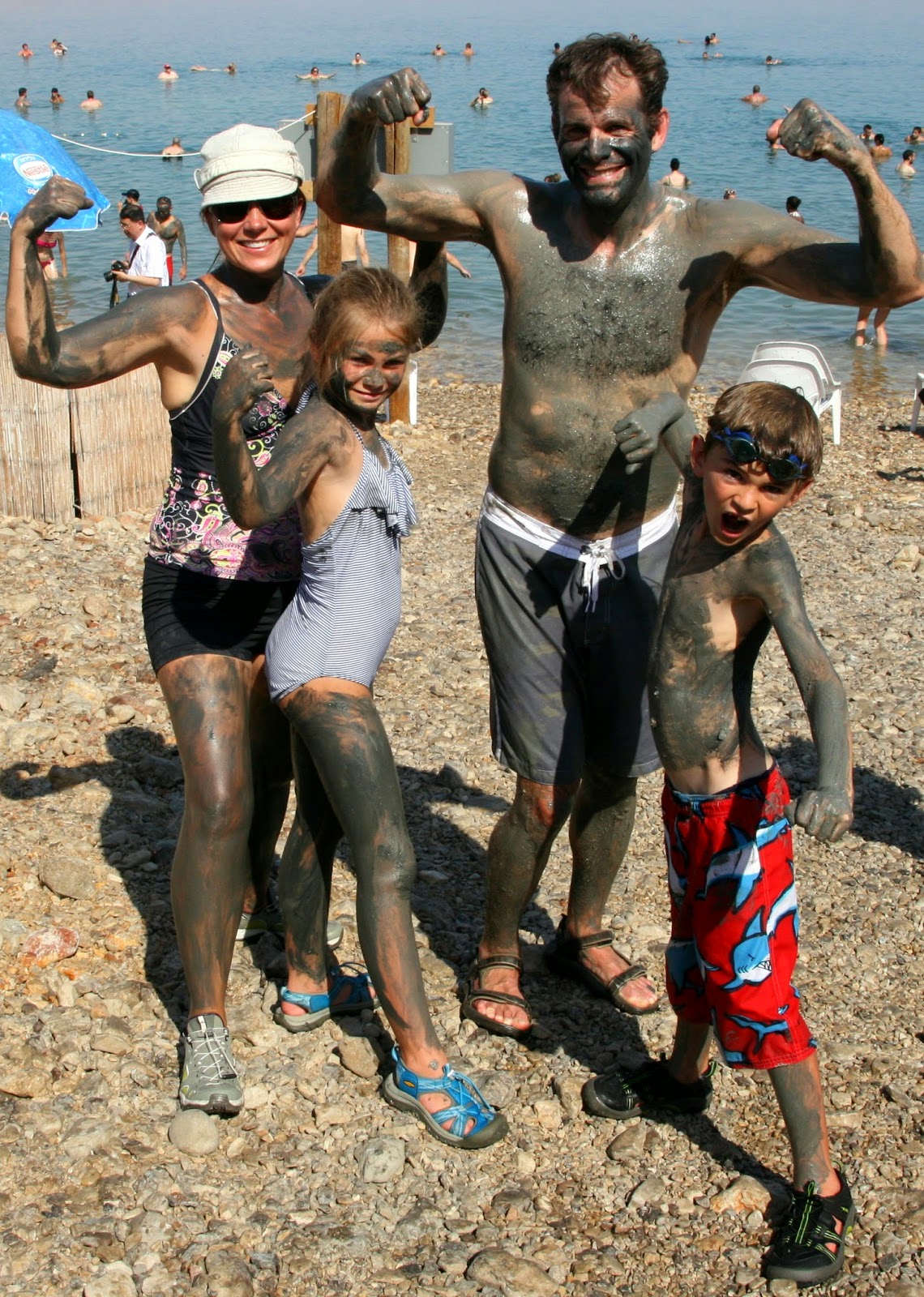 After our spa treatment we drove back to Lily's house and had a wonderful home-cooked dinner.  The adults ate a lot of things I wouldn't but Lily's Mom made me bow tie pasta and for dessert (not desert) a very yummy chocolate caramel pie.

It was a great weekend and we are very grateful for Lilly and her family hosting us. 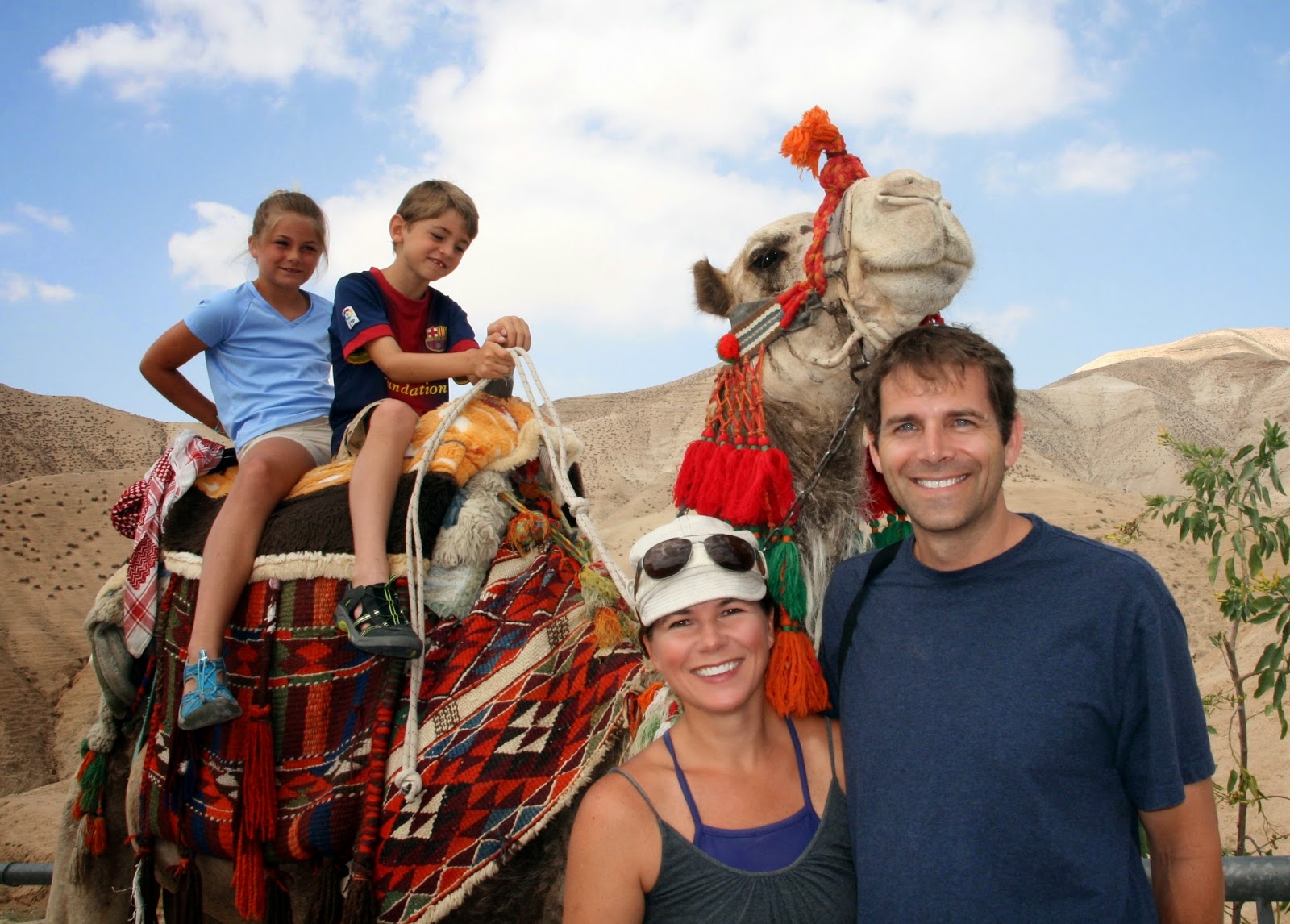 Wow! you are learning a lot.Glad that you are having a good time, now eat some ethnic food. :)