The Home of the Gods

This morning got breakfast at our hotel again, got a van and went to the Rome airport.  Once we checked in and past security Aegean Air was nice enough to let us all in the lounge, even though Dad again was only supposed to have one guest.

Aegean Air is much better than the US airlines.  Our flight was only one hour and thirty minutes and we got fruit-flavored candies before take-off and a small meal during the flight.  Next we landed in Athens, Greece and had a ten hour layover.  And did you know Athens is named after the Godess of Wisdom Athena.  Since our layover was so long we decided to take a tour.  Especially because I am a huge Greek Mythology fan after reading the Percy Jackson and the Olympians series. 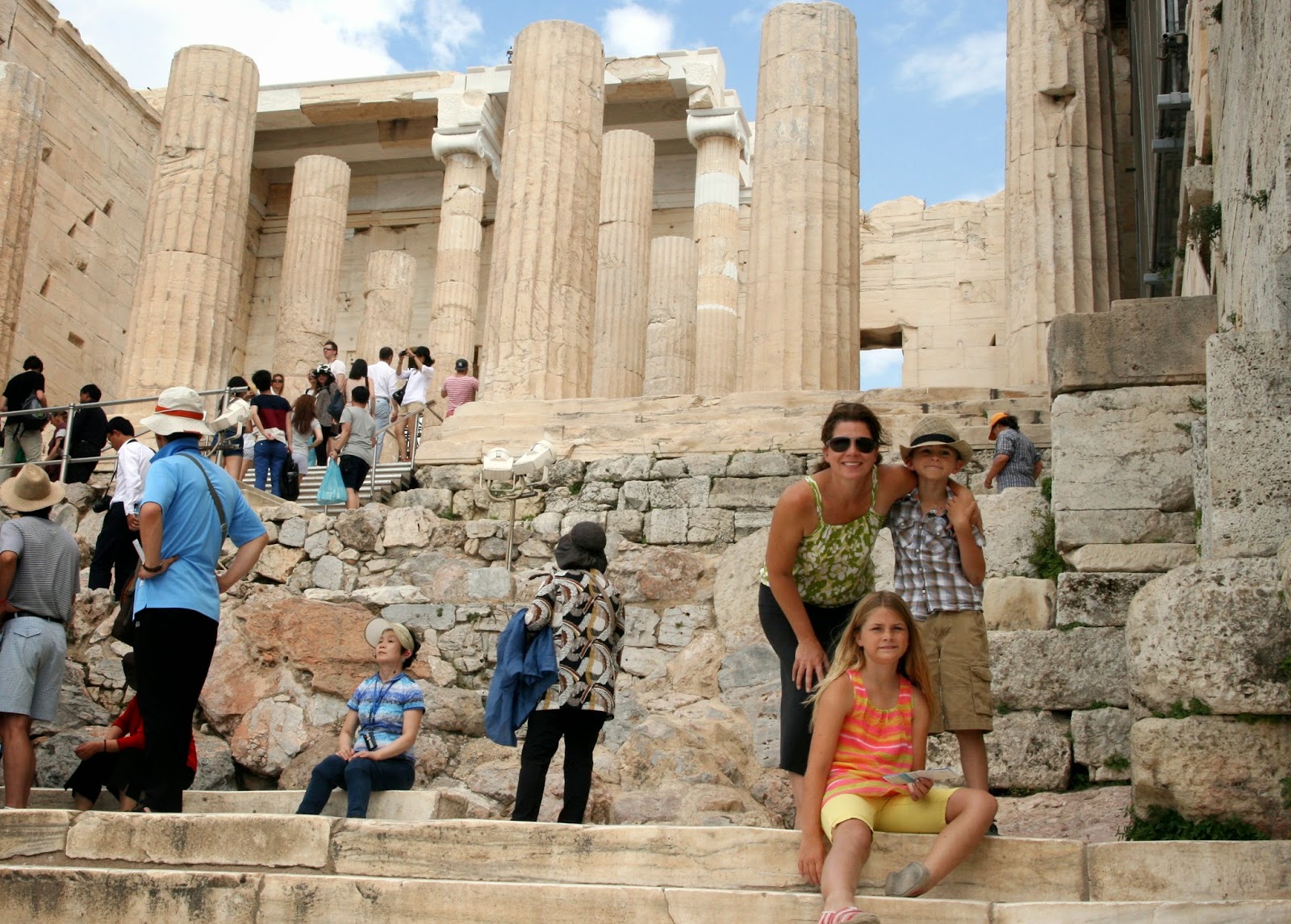 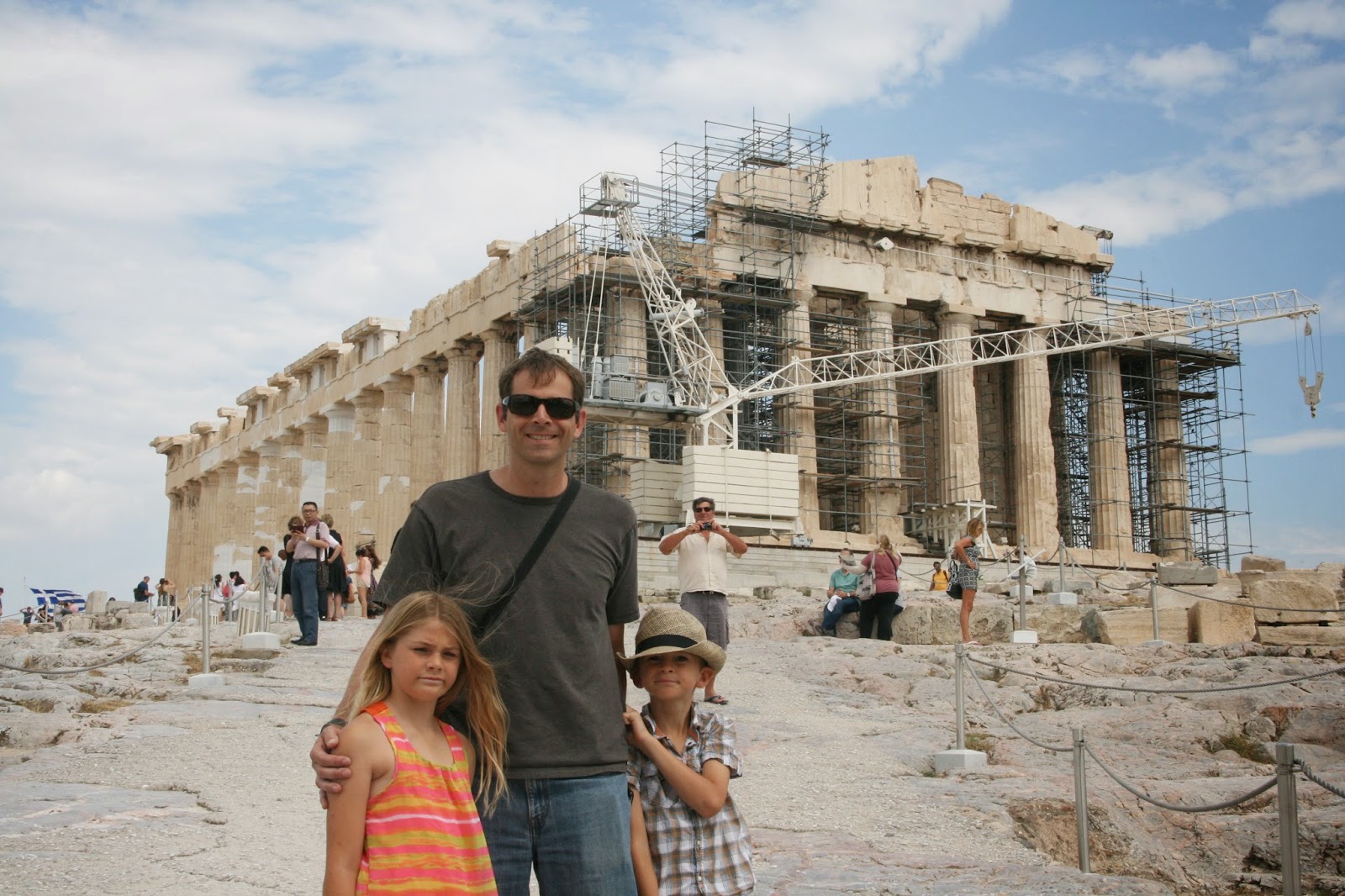 We left the airport with only our carry-ons and met our driver named Fotis.  Fotis is a very nice man who likes to share his love for his family (wife and three daughters) and his country.  First we dropped us off at a large hill and we walked up.  He had dropped us at the Acropolis and we walked up and saw the Parthenon, and several other temples.They are rebuilding the Parthenon right now to ensure it lasts another 2500 years.  The view from up there was amazing...we could see the whole city of Athens and many of the other places we would visit. 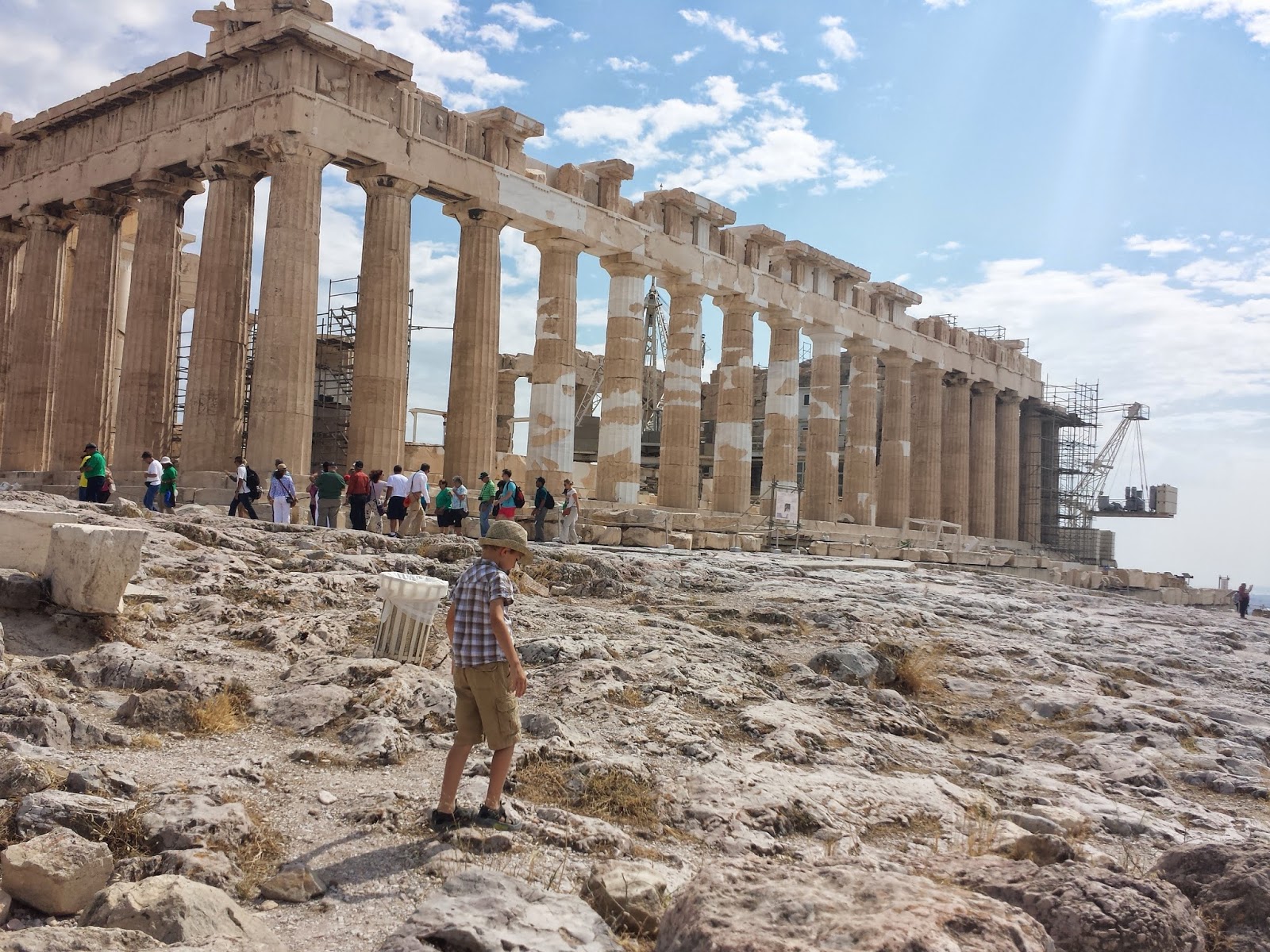 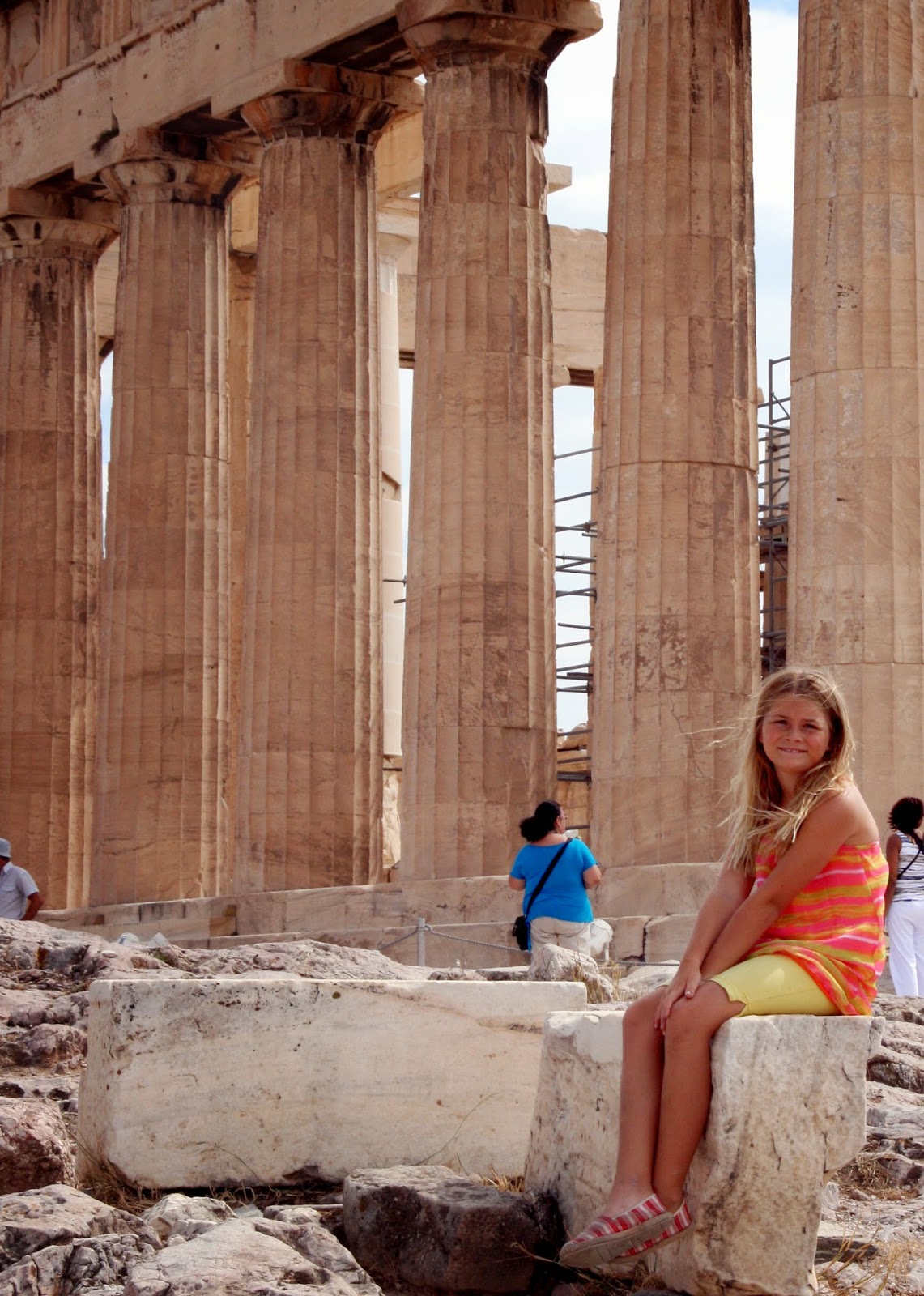 After about an hour we met Fotis and he took Alec and I into the market and purchased drinks.  They have a lot of fruit drinks in Greece.  In fact instead of decorative trees along their sidewalks they have citrus trees, like oranges.  Next we saw the Acropolis Museum.  We started upstairs and watched a video that told us about all the details of the Acroplis, including the layout, sculptures, and how it has changed over time including as a Catholic church, Muslim mosque, and it's destruction by war and looters. 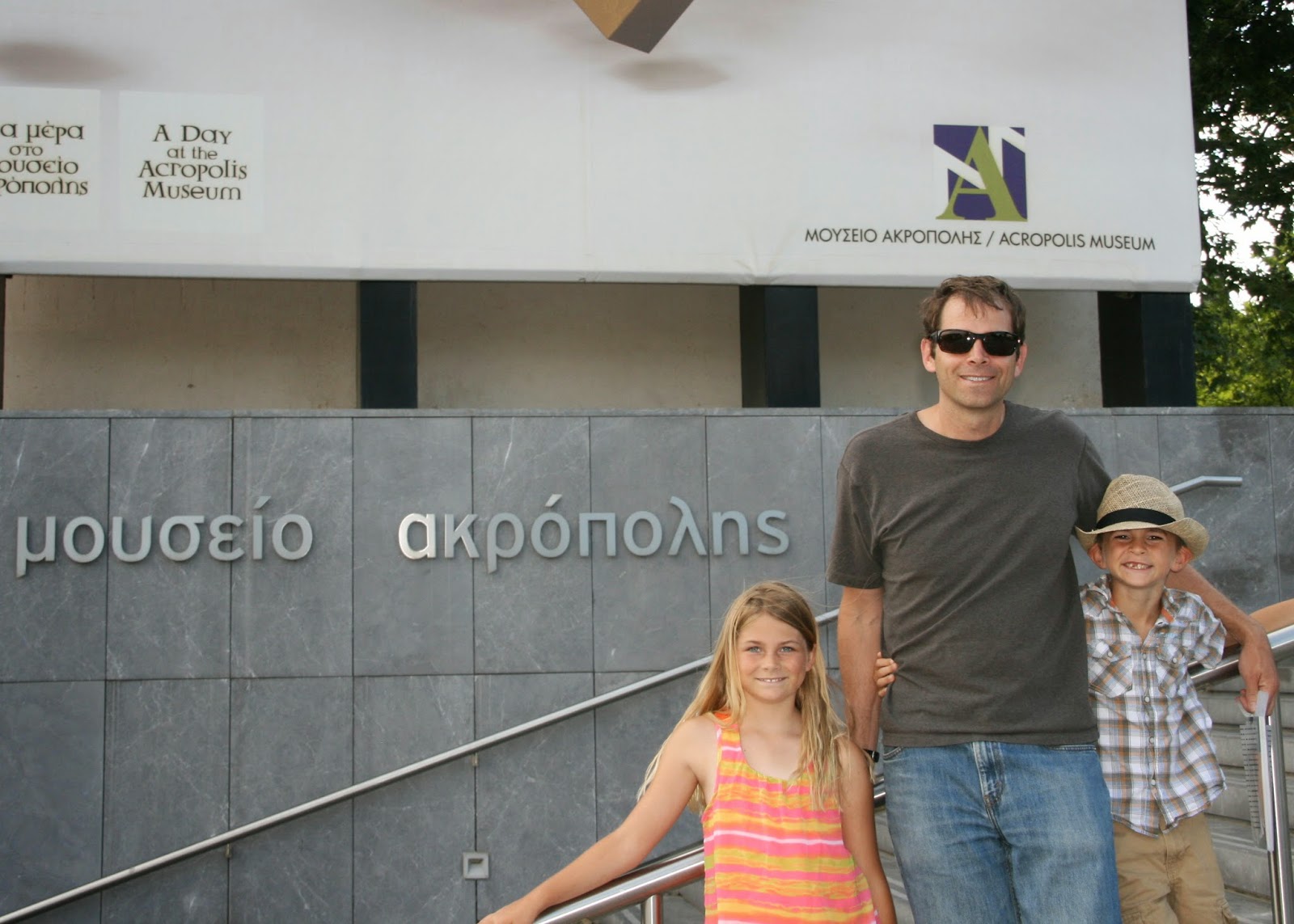 We finished and perfect timing we were able to go see the hourly changing of the guard in front of their Parliament. The guards wore long tassles on their hats and boots.  They were wearing the traditional uniforms that looked a little like dresses with tights.  We were allowed to take pictures with the guards, BUT DO NOT TOUCH OR SALUTE. 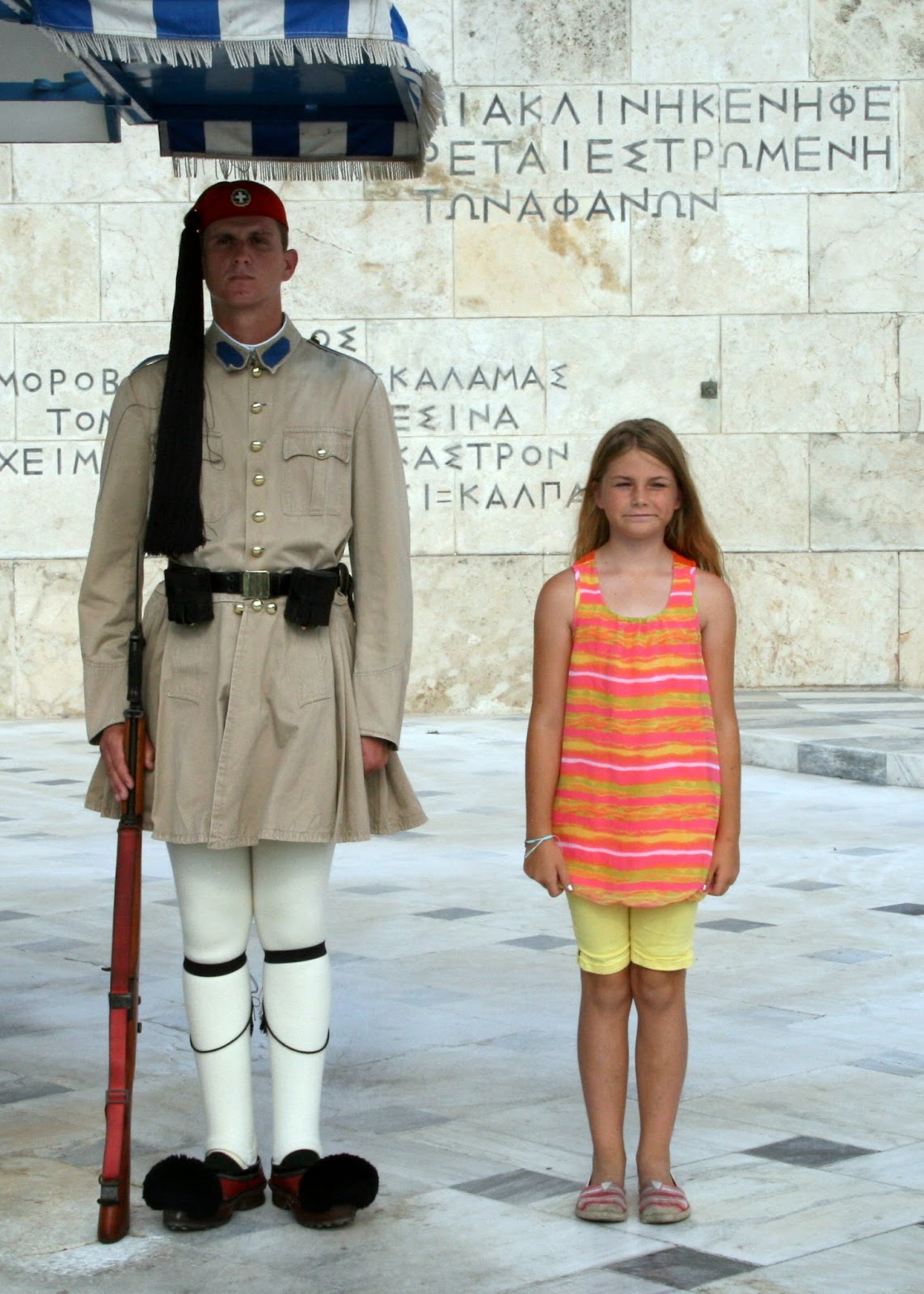 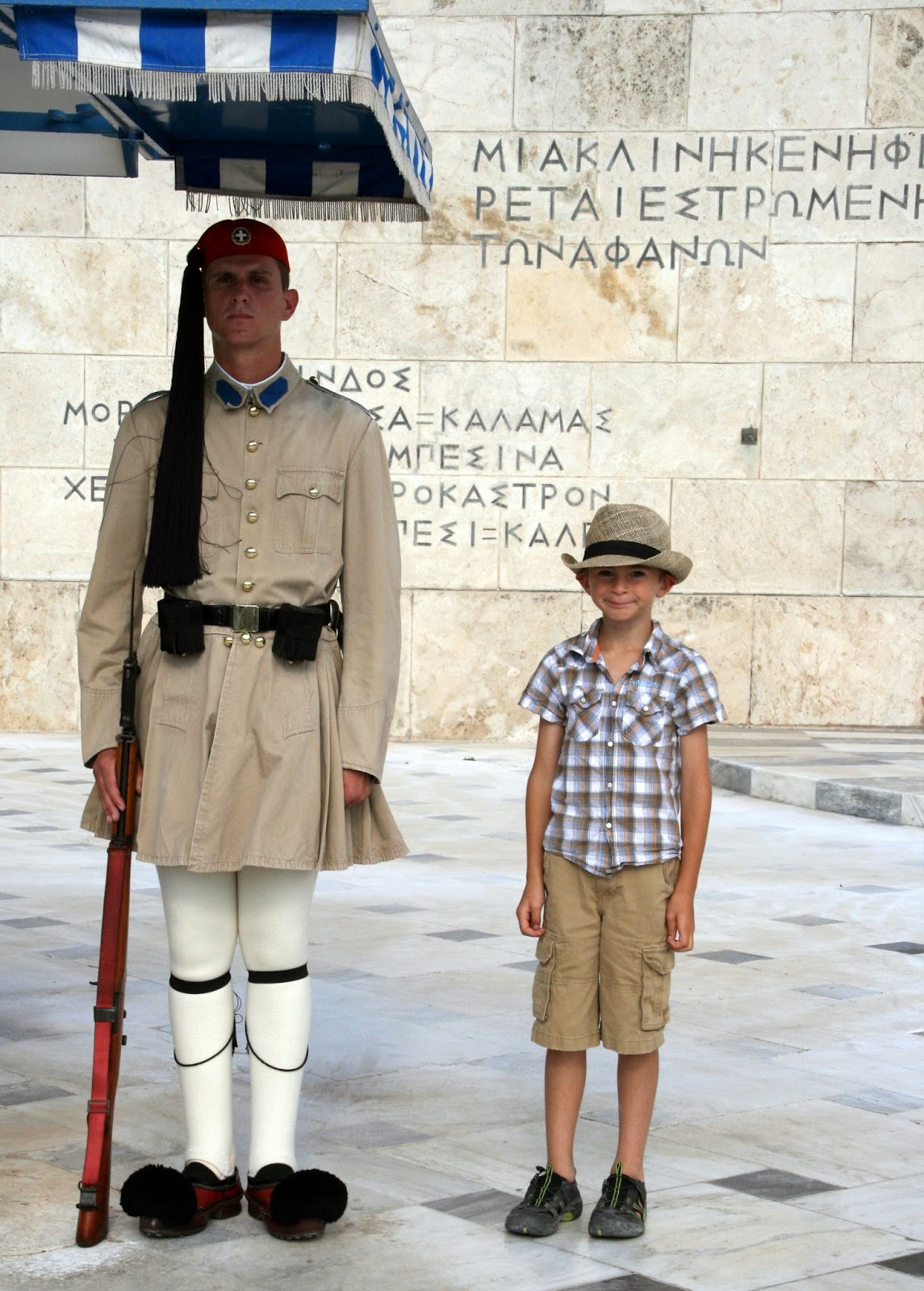 Next Fotis took us to a traditional Greek restaurant named Fagopoteion.  Alec and I still were able to order pasta...mine plain and Alec with meatballs.  Mom and Dad had the more traditional meals with Greek salad, beer, wine, gyros, and more.  It was yummy, including the ice cream for dessert and baklava.  We must be starting to blend in because the people that worked at the restaurant thought we were from the EU and not America. 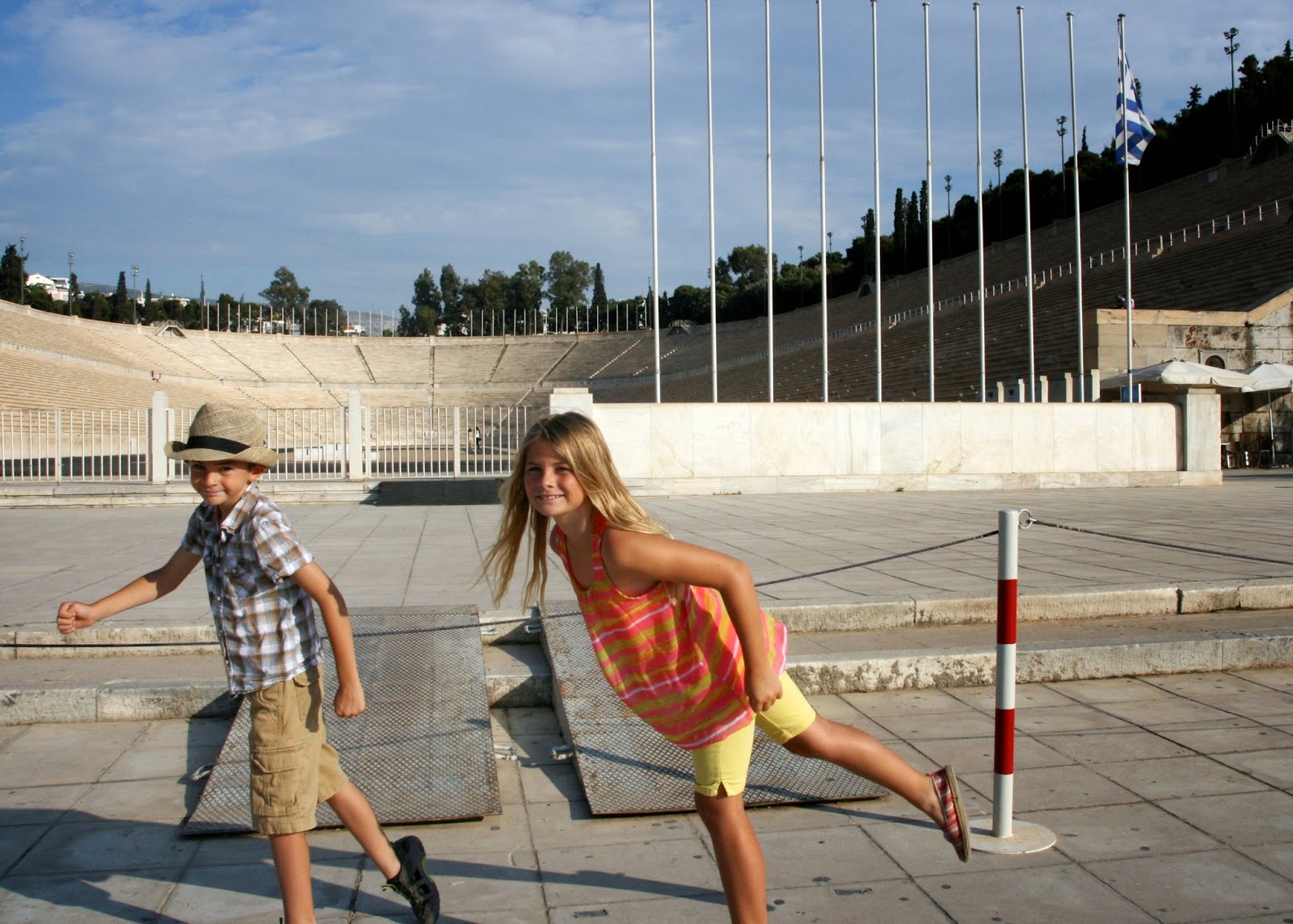 Next we made quick stops at the Temple of Zeus (King of the Gods) and the stadium for the first modern Olympic Games.  The torch still starts at this stadium for every Olympics and then travels to the host city by runner, plane, car, boat...and when it was in Russia even by spaceship.  They still run a marathon here every year that starts in Marathon, Greece.  Sunset was coming, so Fotis drove us to the highest point in the city called Lykavittos Hill for the view and pictures.  As we started to get our pictures taken we heard a rustle in the bushes.  It was a wild turtle.  Alec was very happy...he loves turtles. 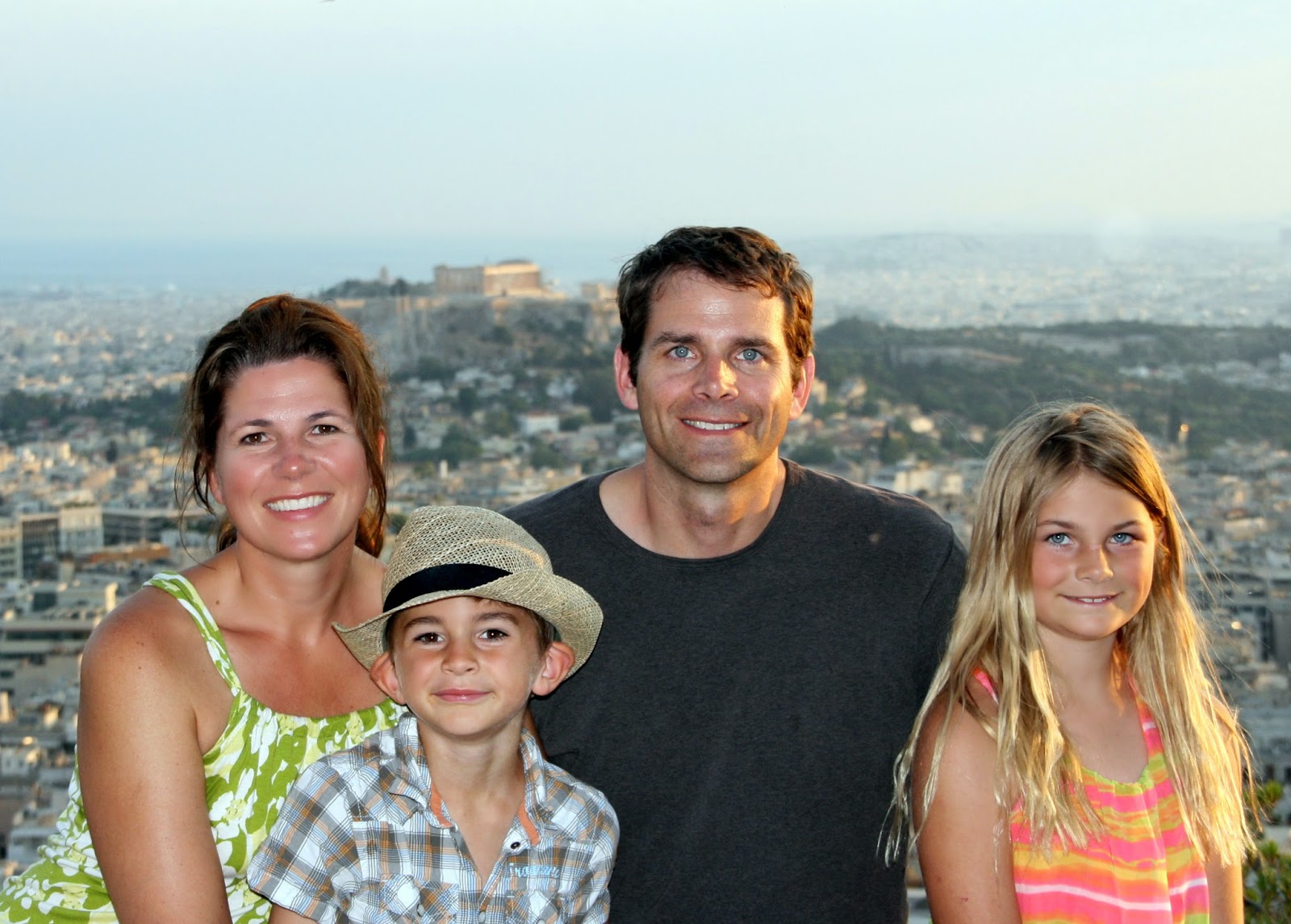 One quick drive through the Plaka area with restaurants and shops for the tourists and we headed off to the airport.  Fotis told us to always call him for recommendations in Greece because a lot of restaurants only open for the busy season and then close down and there food is not that fresh. We were all very emotional saying good bye...in only 8 hours Fotis had become a very good friend who we hope to come back and visit some day.  He helped us cross the streets, opened the doors, bought us drinks and gifts.  I hope I see him again. 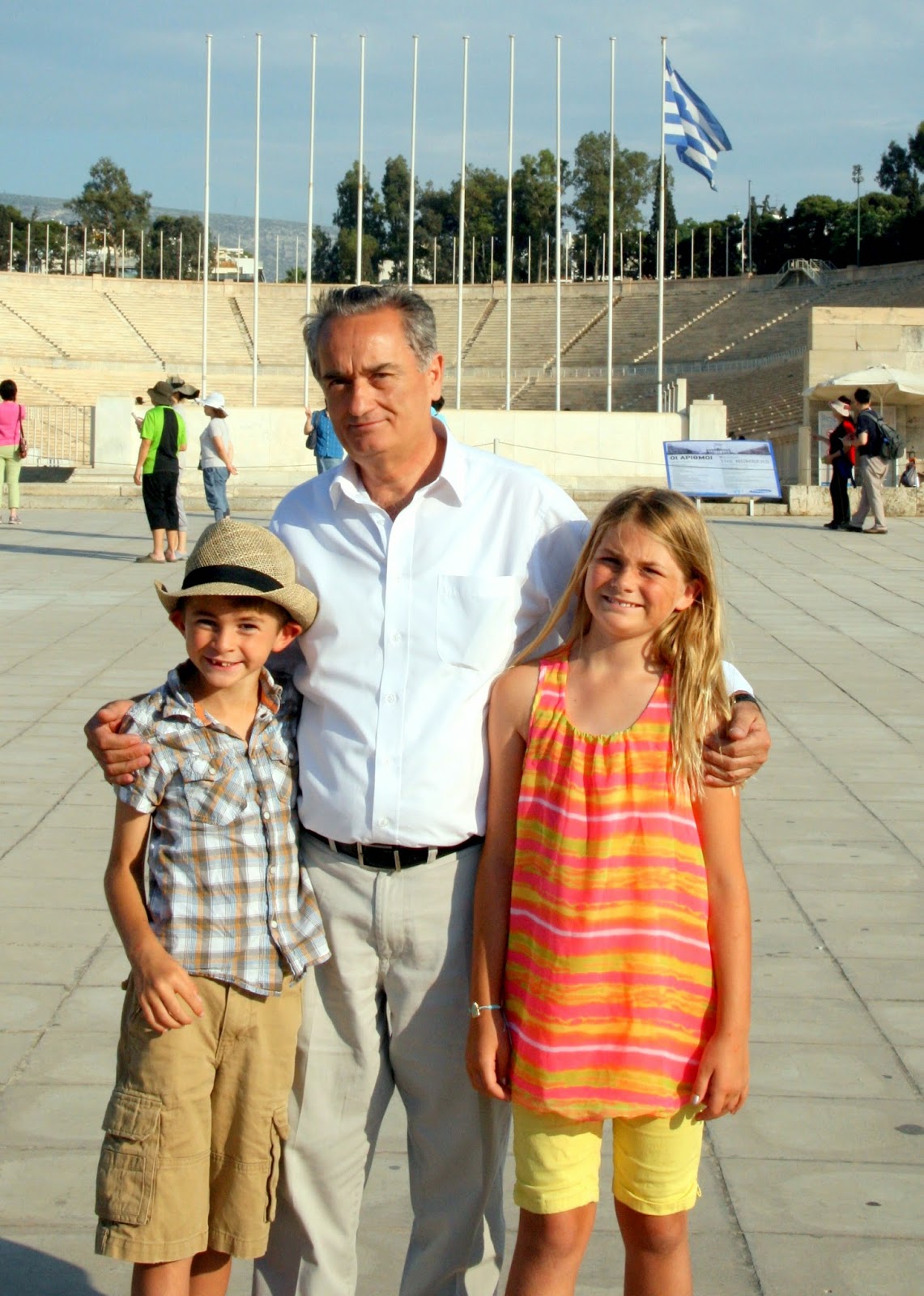 Mom's Comment: We again downloaded the FREE Rick Steve's Audion Guides for the kids' to listen too versus paying for the audio guides offered at the sites...this time Athens
Posted by A. Jolly at 12:23 PM

hi! i just caught up on reading the last few entries after being off my computer for the weekend. sounds like you all have hit so many of the big sights as well as some of the more "off the beaten path" areas in italy. what a great contrast to be able to see both. i always write in a daily journal when i take bigger trips and it's so great that you are not only doing that, but also sharing your thoughts and photos with all of us along the way. it's such a great way to capture the moments, people and how you feel while you travel, and it's great fun to read along over here. i love that you are tracking your way back through the some of the cornerstones of western civilization and already linking the influence of each on the other - it's one of the things that makes history so interesting. hope the next leg of the journey was smooth! hugs to the whole family!! -blythe

I love reading your blog! I am so happy to see that you are having a wonderful time! Athens was always one of my favorite cities...lots of great history, fun music, amazing food and the friendliest people! I also loved seeing your blog from Italy, also another one of my favorite places! Did you eat their pizza with eggs on it?? Enjoy every minute! Can't wait to read more!!! :)

Dear Mrs Marhaj,
Your right about that. No I didnt try that kind. I am not a big fan of eggs but my brother probably would love it.

Dear Blyth,
I am glad you are reading this. I hope you are having a great summer.
Love Ally

Shalom, Ally. Totally enjoyed touring Italy and Athens through your blog, complete with literary references. As an English teacher, I was really thrilled to see you comparing the sightseeing to your reading!! The pictures of the Parthenon particularly delighted me--so much stone on the ground, and yet so beautiful. I'm interested in life in Israel, too, and find your comparisons very insightful. Good thing your mom can cook things you like from scratch. Hope the surfing lesson goes well. How high are the waves near Haifa? Thanks for such a creative and interesting blog. Jeanne Bedwell [friend of Grandpa and Grandma Jolly---and your dad's old National Honor Society adviser.]