An Eye-Opening Experience at a Lake, Unchanged Temple, and Apsara

Day two and a brief break from temples.  We loaded up in the van early and were headed about an hour+ out of town.

The highway we were taking is the one to the capital of Cambodia in Phnom Penh.  It is a 6 hour drive.  Along one stretch we saw stall after staff of bamboo pieces over small fires.  We stopped and would find the best road side convenient store dish yet Kralan.  It is a shaved down thin bamboo stick, stuffed with rice, coconut milk, black beans, and palm sugar.  Then the ends are stuffed with rice hay/grass and then cooked over the fire.  Then you just peel it open and eat.  At 50 cents each it is the snack of choice on long drives.

Eventually we turned off the main road and eventually the straight, nearly single lane road went to dirt and for a few miles we would flanked on either side by houses on stilts.  Our guide told us these were the newer homes, newer families, who have moved into the floating village. Floating village? Where's the water?  We learned we were on the way to the world's second largest fresh water lake, Tonle Sap...second largest because during wet season it would increase 5X in size and these houses miles from where we would find the lake would be sitting above water.  By the way...the lake's average depth...1 meter.  We also learned these homes have only had electricity for a few years, before that they used car batteries for power.  These days some are converting to solar.

The closer we got to the water the larger the homes.  Eventually we arrived at a bridge and there our guide would meet our boat driver and we would take off on a long tail boat through the homes...and eventually to homes that were actually floating.  As the lake fills up the floating homes will be moved closer and closer to the ones on stilts, so they have access to the land.  We also learned when the water is lower many families farm it with a rice that will go from seed to harvest in 3.5 months.  Out into the "main" lake we could not see to the other side (and eventually when we flew from Siem Reap for Sihanoukville we would see how incredibly massive this lake is...even now when it's just starting to fill).  Obviously life here is fishing and this lake supplies 70% of the fish for the Cambodian people. 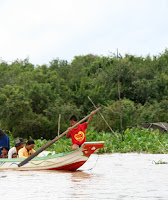 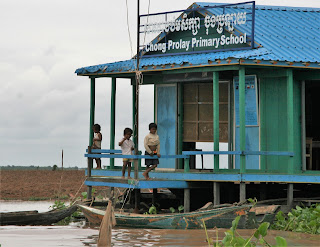 Floating along with the homes were floating schools. Our kids would learn here there were primary and a middle school.  But most students don't make it long in school as their families need them to help generate income.  Most help with the fishing, but yes we were greeted at the bus with many children selling things.  It is highly discouraged to buy from children or to give them money as it only supports the notion that they don't need school.  Our kids were quite affected by these sights.  And Ally being only one year away from high school on our way out from the village would see the high school girls leaving for school.  Not on a bus, not even on a scooter like in Thailand, but on a bicycle.  We learned they would cycle 1 hour each way to school, if they were lucky enough to stay in school.  Another profound moment...

We also learned Cambodia is facing a difficult situation with the lake.  Laos is building a dam on the Mekong for power.  Somewhat understandable, but this lake which also connects to that has a incredibly odd dynamic in that rivers flow different ways in and out (literally reversing direction) depending on the rainy or dry season.  By damming up a major branch this will have a massive impact on environment and people who rely on it. 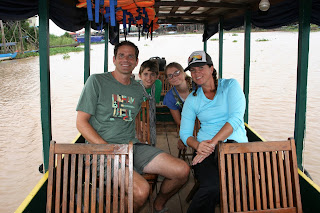 On the way back from the villages we stopped at Beng Mealea temple.  Access to this one has only come in recent years and it is still very much in the state one sees when taken over by the jungle. Very little restoration has been done, so you truly get to see the power of the jungle and how these can go undiscovered.  Our guide even said there are certainly many more temples still hidden within the jungles waiting to be discovered.  Alec, the first day was very excited about archaeology.  This one and the work required I think overwhelmed him and he's turned his thoughts back to architecture.

Back at our hotel we had a little down time, then we were off to an Apsara show at the Koulen  Restaurant.  A huge open hall with long tables and a buffet we met our guide who had secured us a very good table.  The food was so-so, but enough there to find something for everyone.  Loads of tour groups were there.  We enjoyed the show which had several acts, including Alec's favorite a dance involving coconuts and Ally's a little story about a boy and girl in a fishing village crushing on each other.  As the temples are covered with Apsara dancers it was really amazing to see the dancing live. 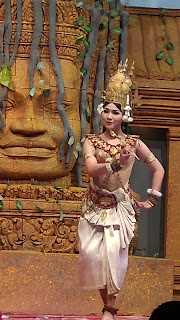 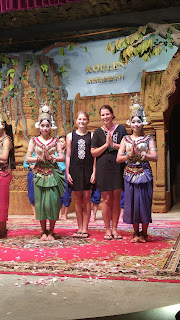 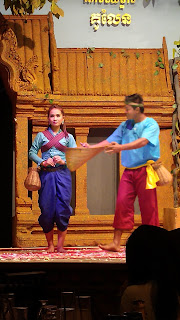 Straight to bed as we had a very early wake-up ... in the van at 5AM we would be headed to Angkor Wat for sunrise.

That snack does sound yummy. The dancers were very pretty. The whole story of expanding lake and floating homes were fascinating. Hope to hear more when you visit. Love, Nana

That snack does sound yummy. The dancers were very pretty. The whole story of expanding lake and floating homes were fascinating. Hope to hear more when you visit. Love, Nana