The next two days are going to be blogged by Mom and Dad.  Reason being…our guides gave us another term to use…like Happy House means bathroom.  Sticky Rice means we need to gather together closely so they can talk to us.  There’s also one called “Temple Out”…which means OK…we’ve had enough temples and for the next two days we would travel north through the first and second capitals of Siam and do a bunch of temples.

So our next day we would travel north to the city of Ayutthaya.  Ayutthaya was the longest capital and second of Siam.  On the way there, we made a stop at a roadside delicacy vendor, barbecued rat.  The Thai people live off the land and do not eat much processed food.  So in the area we were traveling there were a lot of rice fields and the rats love to go there, so that is where they are hunted.  They are grilled and served with a chili sauce.   If they are really lucky, they find a snake in the field to BBQ and sell as well. 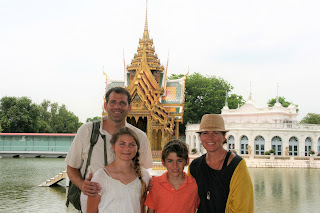 In Ayutthaya we visited the king’s summer palace called Bang Pa-In.  It is very different from Camp David…the king who built it wanted to show Europeans they were just as civilized, so it almost felt like you were walking in Epcot…there was Thai architecture, Chinese, European, and more. 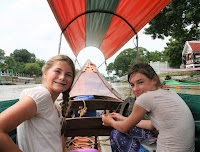 From the palace we took a longtail boat down the river and were picked up by our vans and taken to a local restaurant…very good.  From there we went into town, checked into our hotel, and quickly changed for a bike ride.  Very refreshing, we rode through the rain to Wat Phra Si Sanphet.  We were there at dusk and in addition to the beautiful stupas we got to witness hundreds of bats exiting the buildings.  This evening we would dine on a rice barge…and yes as loved in many cultures in Asia we enjoyed a little karaoke.  Lots of temples and we were all tired, but the kids enjoyed the roof top pool before crashing out at Kantary Hotel. 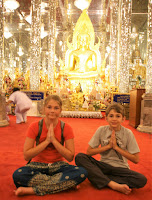 Up early again the next morning we were on the road again, continuing north.  This time to the Sukhothai, the first capital of Siam.  We stopped at the Wat Tha Sung ..btw Wat means temple.  This temple is also called the glass or crystal temple as it is very opulent inside with chandeliers and little diamond-shaped mirrors covering everything.  It was built to enshrine a monk who is believed to have reached enlightenment because when they went to cremate the body it did not burn.  Along the way we stopped in the town of ____ (back to you later with this one).  Here we stopped and toured a local market and tried several things.  The item the kids enjoyed the most was lotus flower seeds.  They taste very much like snap peas.

From there we went to the river and climbed aboard a rice barge for a trip down a river which is home to the last river families in Thailand who’s homes are built floating on the river.  Many have fish farms right along side their home.  The government has allowed this one to stay established as in the past they moved their homes and children never went to school regularly…by allowing them to stay in one spot children can attend school.  From here we went onto Sukothai, checked into our hotel, Legendha Sukhothai Resort, and again biked out at sunset among the temples, including one containing a very large Buddha.  Back at the hotel we enjoyed dinner and a Thai cultural dance and drum show. 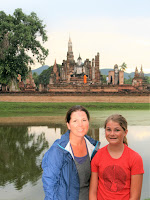 So did you try rat on a stick? Was it cosmetically resplendent? Enquiring minds have got to know! Glad that you are having a good time.