Awake at 4:15 Kanha and our driver would be arriving at 5AM to drive to Angkor Wat.  Now this seems really early and yes it is open all day, but now that we have do it we totally agree the way to go.  For starters it is much cooler and and second it is really neat to watch all the features pop out as the light brightens. 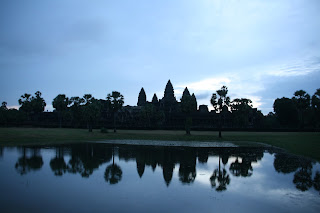 As we cue'ed (lined up...we know America seems to be the only country in the world that does not use the word "cue") up we saw how popular this was...buses, tuk tuks, bicycles, were all flooding into the park.  And here's where the guide knows best...we crossed the floating bridge (a replacement while the restore the original...which the kids thought was so cool to walk on) with everyone else and then proceeded right across the lawn to one of the less crowded reflecting pools.  They would not allow anyone actually in until it was light enough to be safe.  There were hundreds of people...taking pictures or just sitting on the lawn taking it all in.

Once we got going we admired a large outside wall depicted the story about the demon and the monkey king and the epic battle for a beautiful girl.   Alec asked "why are all the battles over pretty girls?" Good question. We walked and saw several libraries, which impressed Ally.  We also saw the four inner pools representing earth, fire, water, and air.  We also went into a small room opposite a large Buddha where several monks were.  Here our guide told us to make a wish and thump on our chests.  It echoed and apparently this activity is one many Cambodians do. (BTW, the video does not give the echo justice, but you can tell by the looks on our faces). 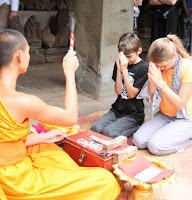 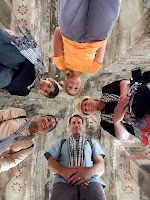 We proceeded then over the the opposite side and along the way passed the "center of the universe."  It is believed that Angkor Wat is created and laid out as such to have that point at the middle.  On the other side we came upon the Buddha and two monks.  We decided being in the largest religious site in the world it only made sense to get blessed here.  After that we

then proceeded to the back towers where Andy, Ally, and our guide got in a ten minute line to go up (much better than the 45 min one our friends who had visited some days prior passed on).  Alec and I explored more areas while waiting for them.  Towards the end of our waiting we noticed the monkeys were starting to come out of the forests and move into the temple (I am sure as they knew the tourists were there to feed them).  Kanha always knowing how to avoid the crowds had us exit the back of the temple.  Much less crowded and a beautiful view as well.
Back to our hotel we got a good rest until the afternoon then we went to a silk farm.  Run by Angkor Artisans, it is a semi-public and social Cambodian company that was originally created to help young rural people find work near their home village.  It has grown a lot, but still maintains the same guiding premise, but now a lot of sites have lodging for the students to live there.  We got a beginning to end tour of the silk process...including the raising of the silk worms, how they manage the cocoon creation, how they harvest the inner and the outer silk of the cocoon, how they remove the gum, and how it is spun, dyed, and then weaved into incredible creations.  Having seen the process and the amount needed to weave even a simple scarf made one appreciate the handicraft skill...and honestly the cost then attached to pure silk.  We did learn it is mostly women working in silk due to the patience required in all the steps of the process.  Did anyone see our trying deep fried silk worms, bbq-flavored in Thailand, well Andy was daring enough to try a boiled one straight from the de-cocooning pot.  The guide was very proud of him.

Before returning to our hotel we got to finally get up close to a large beast we have seen in our travels in Thailand and here.  A local community has started giving ox cart rides as a way to raise money.  They take turns between community members, so there is still plenty of time to get field work done.  The boys took one cart and the girls the other, even with Kanha joining us.  We enjoyed the ride, especially as the kids got to see many animals they are missing from their own farm at home, ducks and chickens.  By the way...ox...are actually water buffalo. 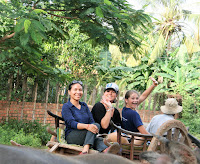 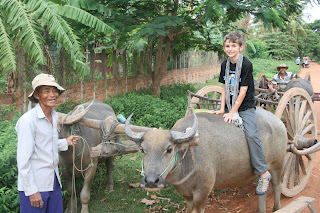 We had the pleasure tonight of meeting some friends from our REI trip on their last night in Siem Reap for dinner.  We enjoyed the Marum, which is is run by Kaliyan Mith, an NGO that has been working with street children and other marginalized young people since 2005 in Siem Reap, Cambodia.  It was a beautiful place and we sat outside in the garden area and enjoyed some creative cocktails as well as meals, including a dish that included red tree ants.  Biding our friends a safe journey back to the US we were off to bed because tomorrow.

NOTE:  We have figured out our dinners are off one night in every blog...opppssss.  We have literally lost track of time.  Between it being a wonderful vacation and the time difference to the US we are constantly asking what the day and date are.
Posted by A. Jolly at 5:45 PM