Last Day in Singapore and On to Thailand 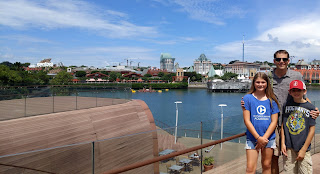 Thank you so much to Mrs Ringham, Grandpa Steve, Nana, Cousin Lisa, Mrs Tenorio, Papa, and Ms Kent for leaving me messages on my first post.

This is our last day in Singapore.  Today we are going to a place called Santosa Island, which is a little island off Singapore filled with shopping, restaurants, and attractions.  Instead of taking a cab or Uber today we walked to the subway/metro station.  Unlike in New York City the subways here are very clean.  There is no eating or drinking allowed (in fact chewing gum is illegal in the country).  And instead of everyone pushing to get on and off…there were markings on the floor and you stood in a certain place to board the train and there was a space for people to exit the train. 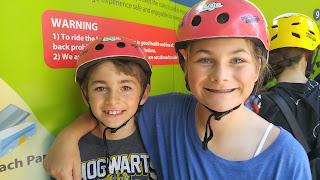 After we got off the train we walked across a bridge/boardwalk to the island of Santosa.  After getting onto the island we had some trouble finding the monorail that would take us even further towards the shoreline.  After we got off the monorail we walked to a ride called “The Luge.”  In case you don’t know what a luge is..it is a Olympic sport.  Normally it is a sled with blades on an ice track…this is a sled with rollers on a cement track.  We got checked in, got our helmets, and were on our way.  We actually rode a ski chairlift to the top of the luge.  Half way up I got a very good view of the Merlion, one of the symbol of Singapore.  After a short wait in a line, and a lesson on how to drive, the race began.  We raced down the course.  We did it three times and it was so much fun.
After that we were getting hungry.  We walked to the shore and there were lot so of little beach restaurants/bars.  We stopped at Sand Bar for a tropical drink and crepes.  We had a lemon curd and pineapple one and another with yogurt and berries.  Both had vanilla ice cream.  YUM! 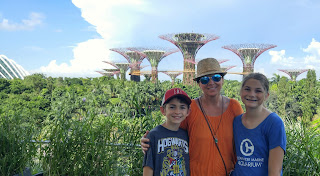 After that we went back to the monorail and back to the metro and we were off to the Gardens by the Bay.  It is very big with lots of gardens and giant metal trees.  There were also two HUGE glass domes.  We bought tickets and the first one we went in was the Flower Dome.  Besides lots of plants there were many literature themed areas, including Alice in Wonderland, Winnie the Pooh…and lots of dragons.  My favorites were the dragons as they were carved from wood. There was also a cottage in the center surrounded with lots of flowers, including Great Grandma’s favorites hydrangeas in lots of colors.  After we went to the second dome called the Cloud Forest Dome which was much larger and had a huge waterfall several stories tall.  We got to see many cool trees and plants and took an elevator to the top and then walked a skywalk all the walk to the bottom through the misty cloud forest.

We were too tired to go out to dinner, so back at the hotel we ordered room service and went to bed because we had an early flight to Bangkok.

We got up very early and flew to Bangkok.  After getting through Immigration we collected our bag and took a shuttle to an hotel right there at the airport to meet out REI guides.  There were three guides…Anon, TK, and Vicky.  Vicky is training to be an REI guide.  They were very nice and gave us welcoming gifts…first a flower bracelet called a Phuang Malai for welcome and good luck.  Second a beautiful bag with the very popular elephant pants.  We also met the other 3 families on the trip. Everyone was very nice, but there are mostly girls.  Only one other boy named Charley and he is going into 3rd grade, but has become like a little cousin.

We divided up and climbed into vans for our 3 hour drive east to Kanchanaburi.  Along the way to stopped at the “Happy House”…what the guides told us to call the bathroom.  We also stopped at the JEATH Museum which was about the POWs, Prisoners of War, from WWII who built a bridge over the River Kwai for the Japanese army.  After visiting the museum we drove to the restored bridge and walked across it. 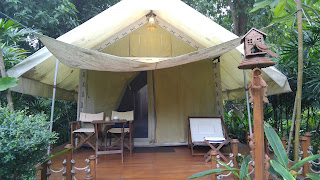 Then we drove to our first hotel.  It was actually a river camp on the River Kwai called Hintok River Camp.  I thought since it was a camp it would be little tents.  It was not.  It was large cabins made out of tent material.  It even had a bathroom and air conditioning.  We had some time before dinner and went swimming in a natural pool by the river.  It was refreshing.  We then sat at one big table for dinner.  I tried some new foods, but was very happy they have my favorite soda, Fanta.  Then off to bed as we had a big, busy day tomorrow with biking, kayaking, hiking, and swimming in a waterfall.
Posted by A. Jolly at 8:10 AM

Good story, Alec. Glad that you are having a good time!

I, too, would have liked the dragons. I was born in the Chinese year if the dragon. The Luge sounded Fun!!

Alec: I liked your detailed description of the transportation and the indoor gardens. I tried to picture having a place to stand to board and exit---so polite. It's interesting that these countries where terrible wars were fought are now our friends and welcome tourists. Thanks for blogging!

I enjoyed hearing about your trip, Alec. A literature-themed garden sounds like my dream!

Hugs to you all,
Ann Van De Water