We woke up in the morning bright and early, got dressed, and went to breakfast.  Today was going to be a very busy day.  This breakfast was really good with lots of western choices including donuts and hot chocolate. 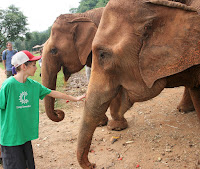 After breakfast, we drove to Elephant Nature Park where they rescue elephants (and dogs and cats).   When we got there we sat down at our tables and our guide explained how the day would go and introduced us to Mike who would be leading us around the sanctuary.  Mike’s English was very good and all self taught from working with the western volunteers who came to the sanctuary.


The first thing we did was we feed two elephants fruit.  I think the elephant's favorite were the bananas!  After we were done feeding, we walked around for quite a while and we got to see lots more elephants and water buffaloes. While we were there, I learned a very cool thing.  Some dogs get so attached to the elephants they become their guardians and when people come close they start barking unless it is their keeper.

After we walked around for a while they rang a bell that meant lunch.   For lunch I got fruit, rice, soup, and noodles.   Lunch was so fun and after lunch we got to go shopping in the gift shop.   Though I didn’t get anything, Ally got green elephant pant-shorts and a shirt that said “Save the Elephants”.   After shopping it was time for what I think was the most fun part of the day,  washing the elephants.

We walked down to the river and used buckets and threw water on two elephants while they ate bananas.   One time an elephant almost ran away, but came back when she saw the other had bananas left.  We washed the elephants because horse flies can lay eggs on them and we want to make sure there aren’t too many flies.   After the elephants were all washed it was time for them to apply sunscreen.  Since elephants don’t have their own sunscreen like we do, they throw mud on themselves to protect themselves from the sun.  Halfway through applying sunscreen, 3 elephants and a baby walked over.  The baby elephant on its four feet was taller than me!

After that we walked over to fences that said “Danger”.  It was the male elephants.  The strongest of them all was named Hope.  His got his name because he has an infection and they hope he will survive.  Hope was trying to throw full bamboo stalks at the elephants across from him.   After we left the males, we went to an elephant’s pen.  I asked what was wrong with her foot because it was all purple.  They said she had broken her leg.  She had stepped on a landmine.   We went and saw a few more after that.   There was one really cool one that their trainer put a flower in her ear.  She had an earring because one of her injuries was a hole in her ear that would snag on thing and tear bigger, so a keeper designed an earring for her.   She was one of the elephants that I mentioned earlier that had a guard dog.   He was really cute.   This entire time we are walking right along with the elephants...no fences, no barriers, except for the male elephants.
After we went back to our table, there were tea coffee and deserts waiting for us.   When we were walking out, we passed a giant map and dog pictures and an article.  The map had pictures of people who had adopted dogs from the sanctuary.   These dogs had survived things like floods, mean owners, and trash filled areas. 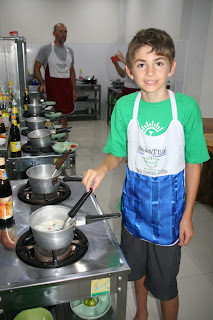 After that we drove for about an hour and a half and we finally arrived at Baan Thai Thai Cookery School!   We were going to make 4 things.  We had a choice of options to pick from.   For the soup, I picked chicken with coconut milk.  We also did a papaya salad,  fried rice, and a dish called Khao Soi.  Mom was most excited for the last one.  I like the fried rice.  My sister learned how to make springs rolls and loved them.  Dad loved his curry.  After a very long time cooking, it was time to eat.  The meal was good but it was mostly fun to cook the food.  I was trusted with a large knife of my own and hot cooking woks…but Mom was always close by.  Though the sad thing was that every kid got burned on the pans but Ally.  My parents enjoyed it because they learned how to make all kinds of things to cook at home.

We got back to the hotel very late at night and got on our jammies and went to bed since we were going to have to get up early the next morning to give Alms to the monks. 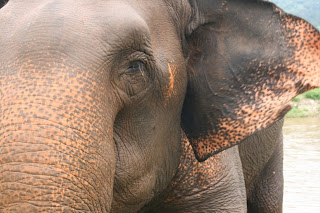 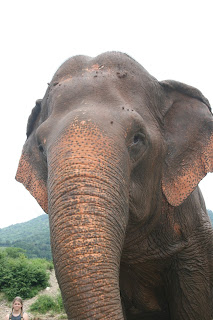 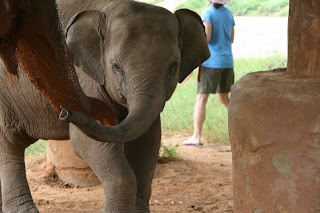 This is one of my favorite blogs. I loved hearing about the guardian dogs..like Christophe guarding the chickens.Alsi, I will be wanting some of your favorite recipes to try in Indiana. Maybe I can have ingredients when you visit, and you can cook. Love, Nana

This is one of my favorite blogs. I loved hearing about the guardian dogs..like Christophe guarding the chickens.Alsi, I will be wanting some of your favorite recipes to try in Indiana. Maybe I can have ingredients when you visit, and you can cook. Love, Nana