Avis, Mom, is going to take over this one.  Even though Alec has enjoyed them writing about the temples is not the easiest of subjects for him.

Landed in Siem Reap, Cambodia, we exited to what felt like a destination in the Caribbean.  We walked onto the tarmac to a tropical breeze and went into a beautiful new international arrivals area all done in the local architecture.  Immigration was easy as we had applied for an e-Visa (note: 2 copies needed...one for entrance and one for exit).  Our driver was a little late, but Mr. Ming was very nice and desperate to practice his English.  Our hotel the Ladear Angkor Boutique is just across the river about 2 city blocks off the bustling tourist area of Pub Street.  A small hotel we were greeted by a super friendly staff and shown the pool, restaurant, bar, and bathroom as our room was not ready and we had a few hours wait. Once we got our room we found even though the advertised "villas" we now know there is just one.  It's a small actual house located right off the reception area, restaurant, pool, and bar.  Yes, literally a small bungalow smack in the middle of the hotel grounds.  It was nice to have the
space, but a little awkward and sometimes loud being located at the hub of the hotel.  We just relaxed and went to dinner down the street at a student run restaurant called "LoveU" where we (the adults) tried our first Cambodian dishes of fish amok and beef lok lak. 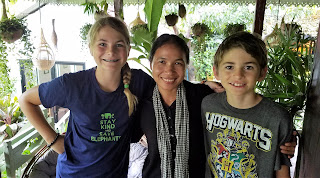 The next morning we were greeted early by our guide, Kanha.  We had been communicating with her for weeks.  She received a scholarship some years back from a NGO called JWOC (Journeys Within Our Community).  Her sponsor was a former Intel employee we met at a dinner party in Folsom. Today we were off to see several temples with our 3 days pass for $62 US per person (children 10 and under are free, but we had to carry a copy of Alec's passport to prove his age).

Our first temple was (__________...we have to ask Kanha as we have forgotten).  This being our first temple is where our guide taught us about their structure...their layout (entrance always to the east, exit to the west aligning to the awakening (sunrise) and death (sunset). 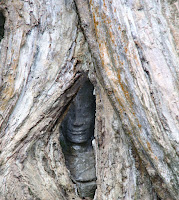 Here we also saw how the trees and forest overtake and destroy these temples.  We also learned how UNESCO has really made a huge impact and most temples have been adopted by a country and archaeologists from those countries work on the restoration.  Sadly we saw no temples sponsored by the United States (going to have to do some research to look into this).

Our second temple was Ta Prohm, otherwise known as the Tomb Raider temple as this was where the movie was filmed. It was founded by the Khmer King Jayavarman VII as a Mahayana Buddhist monastery and university. Unlike most other temples, Ta Prohm is in much the same condition in which it was found.  It was brought into UNESCO in 1992 and has had some restoration work done by India.  Other than the tomb raider tree everyone is intrigued by a carving of what appears to be a dinosaur...after further reading though it's probably more likely a boar or rhino.
Our last temple of the day was probably our favorite located at the city of Angkor Thom with the temple being called Bayon.  Built in the late 12th or 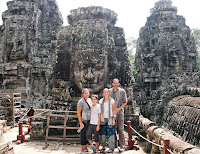 early 13th century as the official state temple of the Mahayana Buddhist King Jayavarman VII, the Bayon stands at the centre of Jayavarman's capital, Angkor Thom.  Following Jayavarman's death, it was modified and augmented by later Hindu and Theravada Buddhist kings.  Bayon was absolutely amazing...49 towers each topped with the 4 faces of Budhha.  A massive complex it was absolutely stunning.  (We must admit even after seeing Angkor Wat who's size is incredible...Bayon is our favorite artistically). 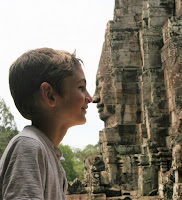 Having had a late lunch we stayed in and ate at our hotel's bar this evening.  Alec has already made friends with a bartender, Chuen.  We chatted with him and learned his English and restaurant/bar skills came from a NGO, which is all hospitality and 4-pronged = Reception, Kitchen, Housekeeping, and Bar/Server.  Ready for your dose of perspective...he makes about $45 a month in salary and says he works to get more skilled and for a meal.  He's been very kind to our family, especially Alec, who his story has made a very large impact on. 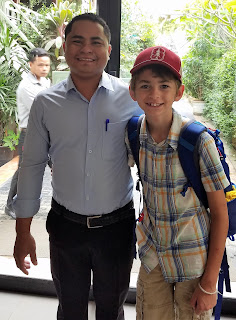 Alec, looks like you made a wonderful friend. Love the pics. Yes, I'd like to know if the US has a temple to preserve, too. Love, Nana