So if you've been reading you now know some how we got our evenings/dinners off by one night, so a quick catch up.  Last night we really had Kanha drop us in town for a little break from Khmer food - PIZZA!  at Il Forno.  Tucked in one of the alleys it was good and quick because we had one hour to eat and get back to the hotel as we were being picked up to attend the Cambodian Circus called Phare. 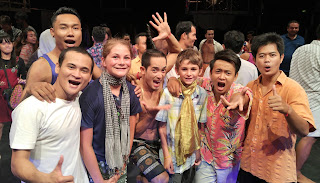 Kanha got us to the circus and at the front of the general admission cue where we got great seats (really this place is so small all seats are good, unless behind a structure pole).  More than just a circus, Phare, the Cambodian Circus performers use theater, music, dance and modern circus arts to tell uniquely Cambodian stories; historical, folk and modern.    Phare artists are graduates of Phare Ponleu Selpak, an NGO school and professional arts training center.  We saw the show "Same, Same, but Different, which through a series of everyday situations explores the different habits and ways of living between Cambodians and foreign visitors."  It really was a spectacular show that we all loved.
There was only one bit in the show that was troublesome...Mom, finally met her match with her stomach.  About 15 minutes before the show ended she felt faint and she and Dad ran out.  Some water on her face and cool air and she would be back, but after some thinking we are pretty sure it is not the local food that got her, but rather milk.  All the milk in Cambodia is imported and we had noticed ours at the hotel while cool was not being kept on ice (because otherwise she and Dad have eaten the same local dishes).  No more milk in coffee or cereal the rest of the trip.
Next morning there was a lot of talk about what to do with Mom.  Today we were headed about an hour and a half away to Kulen mountain.  Did she go?  Did she stay back alone?  or with Ally?  In the end after lots of meds she came along and did really well.  It was decided she'd rather be with us and a knowledgeable guide if something took a turn versus in a hotel alone. 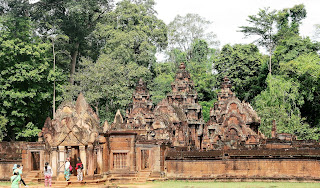 On our way to the mountain we stopped at Banteay Srei, a pink temple with beautiful carvings.  This 10th-century Cambodian temple is dedicated to the Hindu god Shiva.  It is the only temple to have not been built by a king, but it was built by a king's adviser.  This temple is also referred to as the citadel of women due to the numerous carvings of women throughout.  It is also famous for one of the more historic well-known art heists, when a famous French novelist and Minister of Cultural Affairs stole several of these female reliefs.  He was actually arrested and the figures returned in 1923.

About another 30 minutes and we climbed up into the mountains.  Kanha again gave the kids a story that led them to think again.  School here for village kids is tough.  When she was a literature teacher in a middle school in Siem Reap (1.5hr away) two girls came down from the mountain and attended her school.  Every weekend they went home to get money and food to last them the next week.  One girl only made it one year and missed her family too much.  The other made it another year, but as well gave up and returned to the mountain. 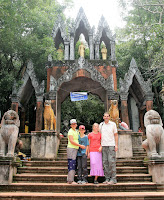 Phnom Kulen is considered a holy mountain in Cambodia, of special religious significance to Hindus and Buddhists who come to the mountain in pilgrimage.  It is also symbolic for Cambodians as the birthplace of the ancient Khmer Empire.  As we wound our way up the stairs we would be struck by the Hindu connection immediately as we were greeted by a group who obviously had made a pilgrimage and were performing some sort of ceremony using the holy water and turmeric. Our guide asked all the locals in Khmer what was going on, but no one knew.  So we just sat back and took it all in.  When they started flinging the turmeric water on the crowd we moved on to climb the stairs to see the reclining Buddha...which is actually a massive rock outcropping, 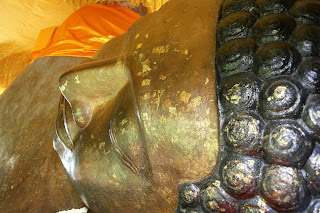 probably 3 stories high that a reclining Buddha has been carved out of the top.  It was impressive and the more recent increase in tourists has the locals learning how to manage the crowds and ensure things are cared for.

After we got down our poor driver found our van would not start.  Rather than stare over his shoulder we took off through the forest to the waterfall.  Along the way Kanha stopped and got us another local snack.  Breaded and deep fried bananas...YUM!  A beautiful waterfall about 60 feet high Dad, Ally, and Alec went for a swim, but Alec was soon out with the fish nipping at his toes.  Ingenious locals had created a couple of changing shacks and charged $0.50 to change.  And then they had coolers all stacked up you could rent for a $1 and use as lockers.  Pretty place we enjoyed a good hour before heading back up to find our driver had gotten help from villagers to pop the clutch and get the van going.
We decided we couldn't make it back without lunch, so we stopped along the way and due to Mom's stomach we for once asked for the air conditioned room versus sitting outside.  Mom had a clear soup , Dad more curry, Ally spring rolls, and Alec...waffles. 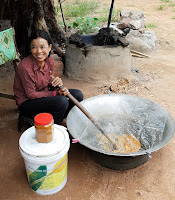 On the way back one more roadside stop to see palm sugar.  We saw the ladders on the trees where they climbed to get the palm liquid from the flower and then ladies would sit and stir it over a fire to get it to caramelize or crystallize.  It was delicious!  And a jar only costs $1.50.  So we bought some to bring home.
Getting Mom on the mend we just stayed in that evening and relaxed.